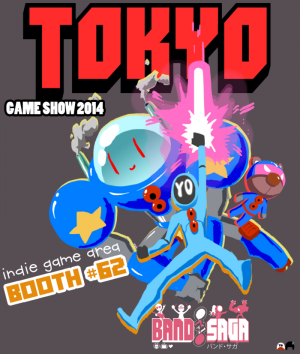 Band Saga is such a weird game, and I mean that in the most beautiful possible way. Part rogue-like, part twin-stick shooter, all mixed in with a stylish, unique musical theme, I can’t say I’ve played anything quite like it before. In this game, you have to put together your band by rescuing members. They’re found in the game’s various stages set in different cities across the world, which you’ll have to clear out room by room until you find them. The game has a really cool classic sci-fi theme to it, rendered in pixel art that looks like it fell out of a 16-bit console game.

Your goal in each room is to take out all the enemies. In the first room, you’ll hear the barest sounds of music playing in the background, but as you clear out each room, more instruments will be added in, creating an increasingly beautiful soundtrack to your destructive tendencies. It’s not just ear-candy, either. Each new instrument will add something to the stage, for better or worse. After you empty out a room, you’ll have your choice of which direction you’d like to go next, with the game clearly labeling what you can basically expect, such as a power-up room or a rescue event. Your character’s main weapon is a little pea-shooter he can fire in any direction, but you’ll quickly earn a sword that can be used for some sweet melee combos as well.

You can also play around with the music using a synthesizer in the game, but be careful, since changes you make will also add things to the maze. Initially, you’re limited with what you can do here, but as you rescue band members, you’ll be able to create more complex tunes and mazes to go along with them. While each city has its own preset tune that you can mix around to your heart’s content, you’ll eventually be able to make your own tunes entirely, and even export them as MIDI files.

Of course, even if you’re not super-interested in the music customization stuff, Band Saga is a pretty solid action/rogue-like hybrid. The game is played from an isometric viewpoint but you have complete freedom of movement using one of the virtual sticks. The other stick allows you to fire in any direction, and tapping on the screen acts as a sort of action button, allowing you to blast open the corridor to the next room, activate switches, and so on. It all feels really good to play. I also absolutely adore the work put into the game’s visuals. It’s incredibly well-animated in that over-exaggerated way that was popular back in the 16-bit days with games like Earthworm Jim, and the art style just bleeds cool. The game has some truly excellent retro-styled cut-scenes, too.

The game is still pretty early, with at least a few months of development time ahead of it, but even its current state, it’s a lot of fun. The more innovative mechanics like the synthesizer are already implemented to a certain extent, so the promises of the game’s innovative design are already apparent. Mobile gamers can hopefully look forward to playing this one sometime early next year, but in the meantime, feel free to check out the video of the TGS demo to get a feel for some of what’s going on in Band Saga. If you’d like a little bit more info on this admittedly hard-to-explain game, you can also check out the developer’s homepage for more details.