Developer Osao dropped Chronology: Time Changes Everything ($0.99) on the App Store last week. If the title didn’t give it away, Chronology is a platform game that grants you, the player, the ability to manipulate time. Straddling the time periods directly before and after an apocalyptic event, it’s up to you to discover the cause and ultimately try to prevent the disaster. Born from a sketch of a snail and a man with a fez, this game has a quirky sense of humor that should prove to have a pretty wide appeal.

I was drawn to this game as soon as I slapped eyes on it. Each time period feels very authentic and austere. The theme switching of the ‘before’ and ‘after’ is a really clever twist on time control mechanics popularized by Braid and the narrative style is reminiscent of Bastion’s($4.99) step by step monologue. With those two games in the back of my mind, you could probably elicit less excitement from a kid if you told them Christmas and Halloween were going to be combining forces to make a new holiday. 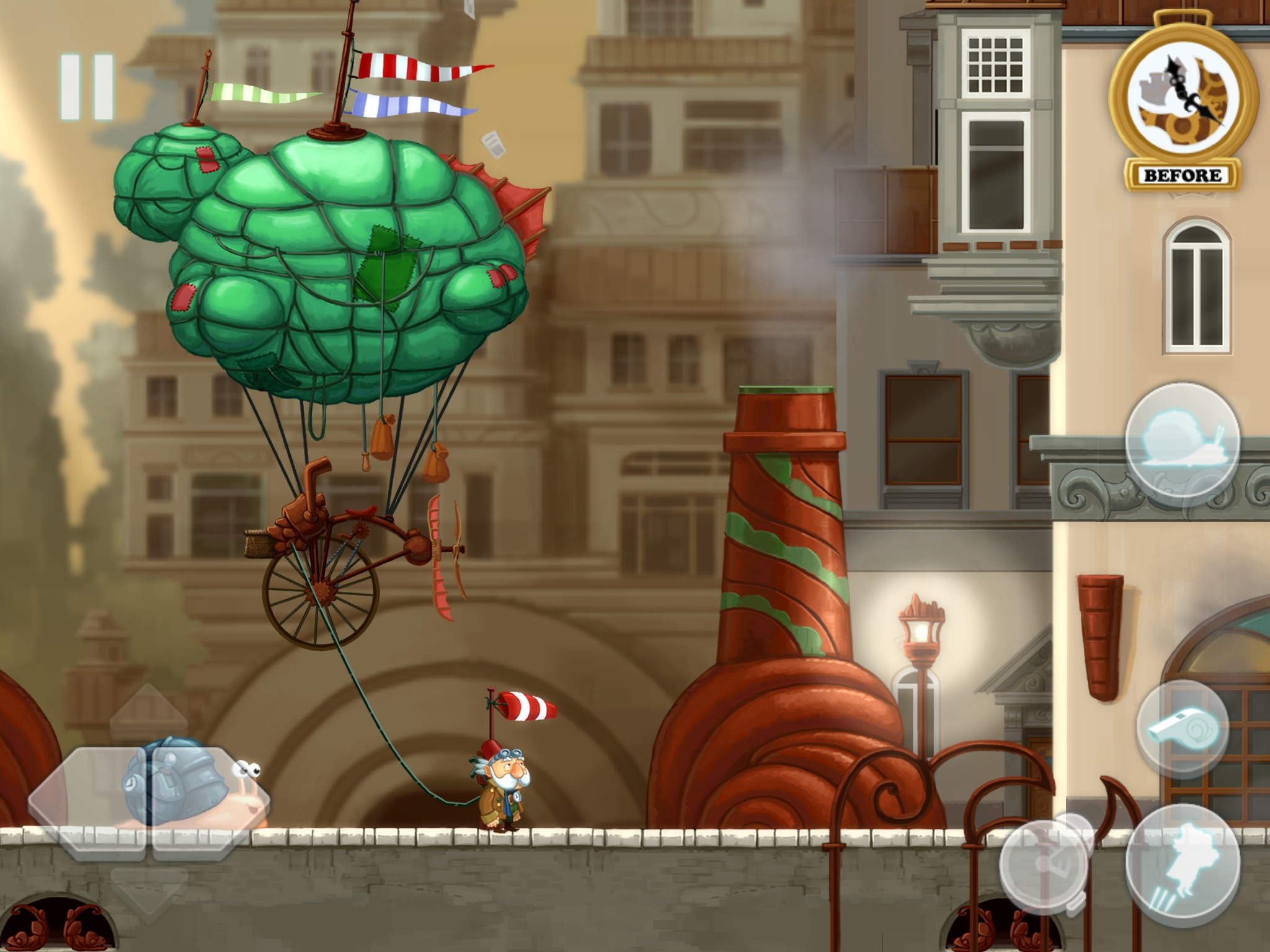 I was stoked to play it and had a good time, but I’m not 100% sure it lived up to the hype I built up in my mind. Screen shots look better than how the game performs, I noticed some frame skipping on my iPad 3 and while it was not enough to interrupt gameplay, I felt drawn out of the otherwise inviting visuals. With three chapters for free and just a single IAP to unlock the other 5 chapters, you can download and see how well it performs for you before you buy.

You start adventuring as a solitary old man but are soon joined by a chipper young snail. Once your party is formed, obstacles will require you to orchestrate some teamwork to surpass. The old man controls which time line is currently in the present, and the snail can freeze time. With these two abilities there are some very complex and clever tricks your intrepid duo are capable of.

Chronology does a lot of things right, but I have to say the controls are slippery. Having just completed the fantastic Goblin Sword ($1.99), maybe my expectations are too high, but I definitely feel like there is a bit of input lag. The combination of frame skipping and input lag are, I think, a byproduct of the fact that this game is a port. While I love that we get a version of this game to play on iOS, you can tell it wasn’t originally optimized for our platform. 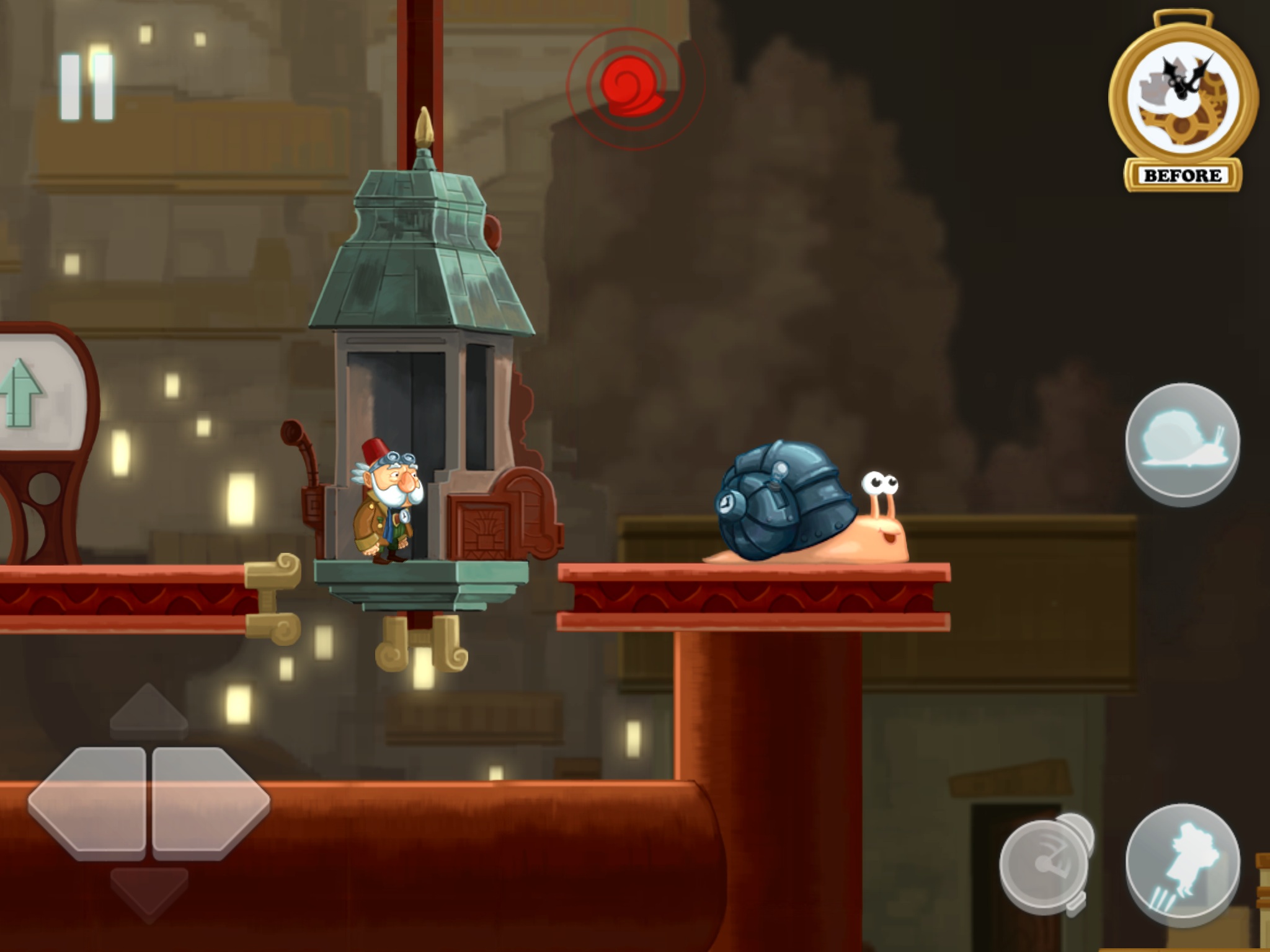 What’s worse is that with all the rounded edges in this game, you want your little professor to have sticky feet. Unfortunately he slides off almost every rounded edge making launching and sticking jumps a precarious proposition. The game does not require you to make a huge amount of precision jumps but the overall feel just isn’t there for me. Another control issue I have is that jumping momentum continues even if you let off of a direction input. This can cause issues when you have to wiggle the d-pad back and forth just to keep your Y coordinate steady. They may seem like small things, but it’s these types of differences that you may not even realize are missing until you play a game that is spectacular rather than just good.

I have to give props to the developers, they managed to squeeze a patch in before I finished my review. The final chapter is now accessible. The plot is kind of straight forward and a touch bland compared to Bastion. I was hoping while I waited for the final chapter to be released that there would be a strong finish to the plot line, but the protagonist basically reads through his history much like an instruction manual. This could still possibly change in later updates but for now I can’t say the story telling is one of the more alluring features to the game.

The challenge seems very back-ended. The game has some jumping/timing puzzles as well as some logic puzzles. They are fun and challenging. The problem is that the vast majority of the difficult content is in the second to last chapter. I would have liked to see the difficulty ramp up after the first chapter but it really didn’t for almost the entire game. The game does establish a good balance between twitch-reaction based jumping puzzles and order of operation logic puzzles. I never felt too taxed by either type to press onward to the next challenge.

Chronology is a great game on paper and has hit some bumps along the way into implementation on iOS. From the activity the devs have shown in our forums thread and with a quickly released fix patch, they have managed to smooth out some of the edges. In the meantime, I still love the time control mechanics and overall look of the game. I had fun so far in my trip through Chronology and I am looking forward to continuing my adventure. The game is a good grab for anyone looking to jump through time and solve a few puzzles.