Yes, I went for the low-hanging fruit with the review title. Let’s just try to move past that and get to the game I want to tell you about today, Kapsula (Free). This is a pretty unusual game. If it wasn’t so utterly out there with its theme, I’d almost think it was the product of some bizarre marketing meeting. This is basically a lane-based endless runner mixed with a match-3 puzzle game, and I’ll let you try to hash out how that might work for a second before I spoil it all for you.

Okay, so it’s a futuristic racer that takes place in a dystopian future Soviet Russia. You drive your car down the endless multi-lane road at high speeds as you zoom past other different-colored cars. Gems lay all over the track, and you’re going to want to pick those up since you can spend them to buy useful upgrades. Avoid colliding with other cars, because a single impact will be the end of your run.

Pretty standard endless runner stuff so far, but there’s a funny little trick to those cars you’re driving past. If you happen to drive past one in an adjacent lane, it will stick to the side of your car, and suddenly, you are twice the target you once were. You can get rid of your little hitchhiker in one of two ways. First, you can position yourself so that your little friend collides with another car of the same color, or alternatively, you can smash it into the guard rails, provided said rails are of a matching color. Doing so will boost your multiplier and is actually essential to racking up a good score in Kapsula. 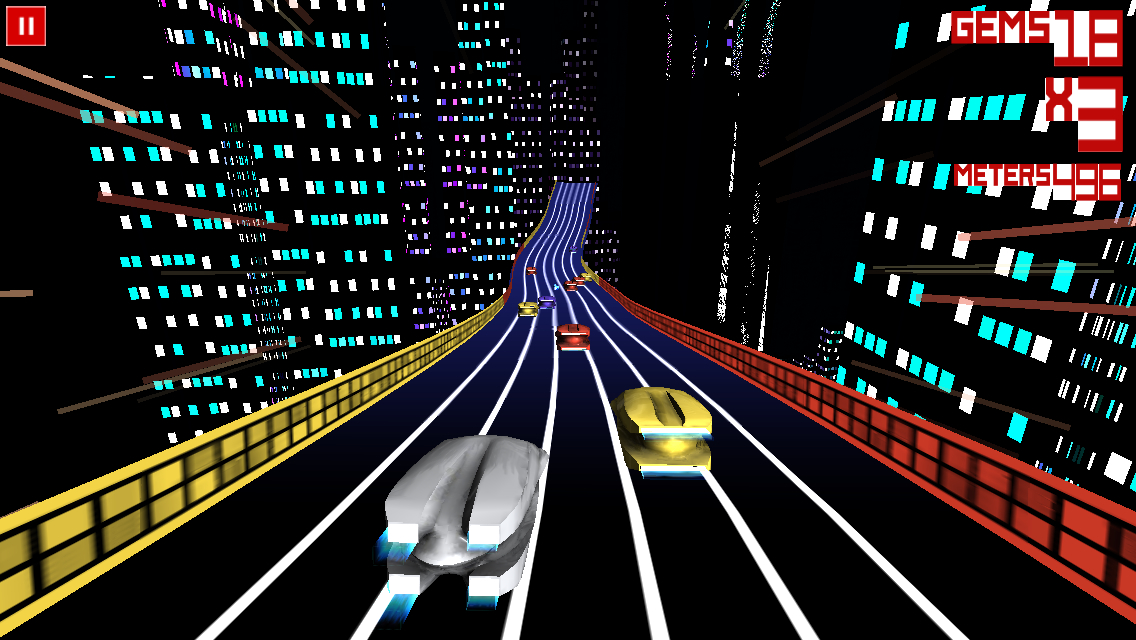 It seems like it wouldn’t be too much to manage since the road is fairly wide, but it’s all too easy to pick up another car while you’re trying to get rid of the first, and filling up half of the road’s width isn’t terribly promising for your long-term health, since it becomes even easier to pick up still more cars. Kapsula requires a certain rhythm quite unlike just about any endless runner I’ve played. We’re all used to trying to make near-misses for extra points at this stage, but imagine that object you just got out of the way of is now stuck to you and you need to dispose of it. It’s pretty tense stuff, and makes for a very difficult game, especially in the early going. Still, I can’t say I’ve played anything quite like it, and that’s not something I get to say often when I’m writing about a runner.

Adding to its merits are the powerful visual style and pumping electronic soundtrack. The game uses bold colors that change up depending on the time of the day you’re playing, producing several distinct looks. It looks great while simultaneously being relatively lean on the polygon budget, resulting in a fast, smooth experience. The soundtrack has a bit of variety to it as well, and all of the tunes are worthy companion pieces to the game’s unique style. That style extends to the game’s UI, which imitates the look of old Soviet propaganda to excellent effect. I’m not sure if this game’s presentation is going to click with everyone, but I personally found it hard to take my eyes and ears off of it. 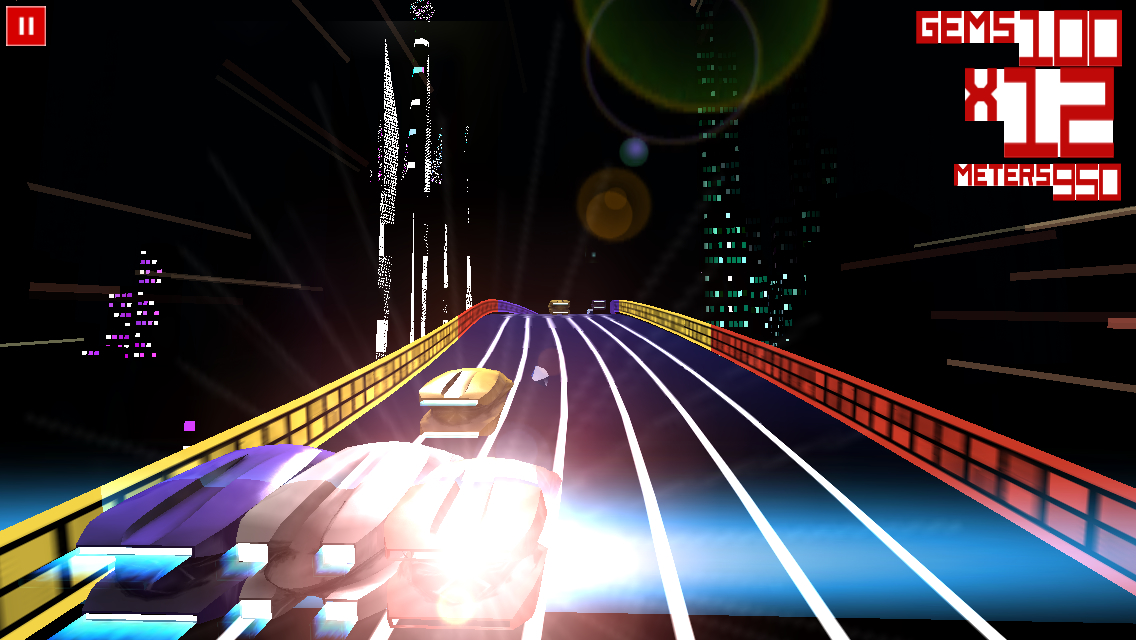 The controls are very simple and work well. All you do is tap either side of the screen to shift one lane in that direction. That’s really all there is to it, which is good since the actual work of playing the game is more than enough for a person’s brain to sort out. The game moves very fast by default, but your car changes lanes swiftly when you prompt it to, so it’s pretty easy to get from one side of the road to the other as long as you count your taps out correctly. After you’ve collected a good chunk of gems, you can buy some power-ups that will extend your survivability, such as a shield or a special fever mode, but they’re quite costly so you’ll have plenty of time to come to grips with the game’s core mechanics before it starts spoiling you.

Kapsula also includes Game Center support for leaderboards and achievements. There are two leaderboards, one for distance traveled and the other for the highest multiplier, and both of those goals require a very different style of play. The game also includes a small set of achievements, half of them pretty easy to earn, and the other half, quite difficult. Apart from a tutorial and very basic audio options, that’s about all the bells and whistles you’ll find in this game, though the title screen does offer up a different bizarre message each time you view it. It’s a little thing that adds to the game’s consistent motif. Oh, and there’s no IAP in the game at all, in case you worried about that.

The game’s biggest problem might be that it’s just a bit too involved at times. Learning how to play Kapsula effectively is pretty difficult and involves rewiring some well-worn habits that you may have picked up in other lane-based runners. The grind for power-ups is also a bit lengthier than I feel like it should be. People like to get a chance to play with the toys as soon as possible, and while I can see the potential argument for making people get nice and comfortable with the game first, it would be nice to get a helping hand just a little bit sooner. That said, if you’re looking for something truly unique and don’t mind taxing your brain and reflexes in a slightly different way than you might be used to, Kapsula is a very solid and worthy pick-up.