As we mentioned in our earlier preview, Armor Games’ Gemini Strike (Free) was worth some attention simply due to its interesting combination of a vertical shoot ‘em up combined with a deep loot system reminiscent of any RPG. Thankfully, Gemini Strike is far more than just an interesting combination of genres; it’s also a pretty awesome game in its own right. With fast, frenetic gameplay, a fair freemium system, and a ton of replayability, Gemini Strike is a pretty fun game.

As a vertical shoot ‘em up, Gemini isn’t anywhere near bullet-hell level of projectile avoidance, but it has its share of agility trials. Within a few levels in you’re frenetically guiding your ship (via tap-and-drag controls) avoiding plenty of weapons thrown at you while trying to take out the multitudes of enemies on screen at the same time. One use special attacks can be found within the field of play, along with Gems, which serve as the primary currency. Levels in Gemini can also have a few cool additions, such as cargo ships that are tough to take down but contain loads of gems and items. 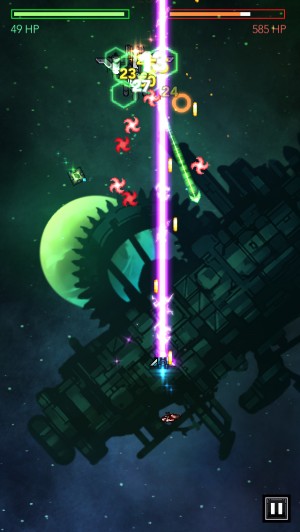 Sounds simple, but where Gemini Strike really differentiates itself is with its incredibly deep RPG-esque item system. Players can purchase and equip a wide variety of weapons that can affect each ship’s three core stats (Damage, Life and Armor), bestow special weapons or unlock cool abilities. For the most part, items are earned by defeating the aforementioned cargo ships and spending gems to unlock any loot boxes discovered within the ship. However, a Black Market is also available to cash in credits (the game’s premium currency) for rare items, while a Shipyard offers plenty of ships to purchase that each have their own stats and special features.

I really love what Gemini Strike has going for it with its loot system. There are so many different items to collect, earn, and upgrade that players can legitimate customize a ship to the play style they want. The rare items are even cooler, typically bestowing not only stat increases, but multiple special moves such as periodic health recovery, special weapons, counter attacks, and more. For me, it really created a compelling reason to continually come back and play simply to try and see what else I can discover and upgrade. 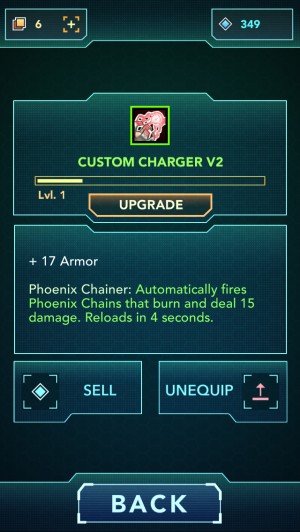 I’d be happy enough with the loot system, but Gemini goes above and beyond with extras to keep you coming back. Random “Secret Missions” are offered that let players try their hand at hard missions that offer decent rewards (including the occasional Credit reward)— however you only have one chance at finishing the mission, meaning failure requires either credits to continue, or abandonment. A decent friend system lets your ship aid others as an avatar, which rewards you with credits. Also, I have to mention the awesome music which ranges from classical opera to futuristic space tunes. The coolest, however, is listening to a track and having the bass drop at the sight of a big boss (which are pretty awesome fights in their own right).

Gemini Strike even does a good job implementing its freemium system. Credits act as the premium currency, and while they are rarely earned (typically by beating the end boss at the end of a Sector) they are also earned on a daily basis as a reward for playing the game. Thus, it’s not too hard to slowly build up a decent amount of currency, which can then be earned to buy ships or rare weapons, or saved as continues. Gemini Strike does have a limited life system which forces players to wait for new lives if you lose enough of them quickly. However, the timer is fair and the credit cost to speed it up isn’t as bad considering the ability to steadily earn them.

It’s pretty rare to see a game with as much of a fascinating genre mix as Gemini Strike, much less one that has decided to take the freemium route. Yet, Armor Games manages to hit that freemium/enjoyment balance nearly perfectly with an excellent shoot ‘em up that deserves merit on its own. Considering the cost of admission, it’s a no brainer to check out Gemini Strike, and I’m pretty sure you won’t be disappointed.