The genre label ‘Metroidvania’ is a combination of Metroid and Castlevania, referring to just about any Metroid game and the post-Symphony of the Night Castlevania games largely overseen by Koji Igarashi. The genre itself, though, stretches back pretty far, and there’s at least one series concurrent to Metroid and well before Symphony that hasn’t really gotten its due in the grand history of things. I’m referring to Westone’s Monster World series, which spun of out the action-oriented Wonder Boy, got a lot of confusing localizations and revisions, and sadly bowed out after the 16-bit console generation. It’s a great series that had a lot of clear influence on later titles such as Shantae ($2.99), but seems to get little credit for its contributions to the genre. With that in mind, I am not going to call Ninja Smasher ($3.99) a Metroidvania. It’s a non-linear action game with a big, interconnected map where you find new abilities to open up new routes, but at least in my estimation, this game is taking notes less from Metroid or Igarashi’s Castlevania and more from Westone’s colorful, cartoonish adventures.

Ninja Smasher‘s developer, known as either Rogue Ninja or Q-Cumber Factory depending on whether you believe the game or the App Store description, has pulled a bit of an interesting trick here. Making their debut on the App Store a couple of years back with Rogue Ninja ($2.99), a roguelike featuring a cute little ninja, they followed it up with a very simple side-scrolling action game called Ninja Striker ($0.99). You had to tap your way through levels, with each touch sending your little ninja guy flying like a whirling dervish of death. There were coins to collect, items to buy in the shop, and scores to attack. Pretty fun, but definitely lacking the complexity of design seen in Rogue Ninja. Well, it turns out that Ninja Striker was really just a warm-up for something a lot bigger. The basic control setup, the enemies, and many of the backgrounds make a return in Ninja Smasher, but instead of being a stage-based score attack romp, it’s a full, three-hour-long action adventure. 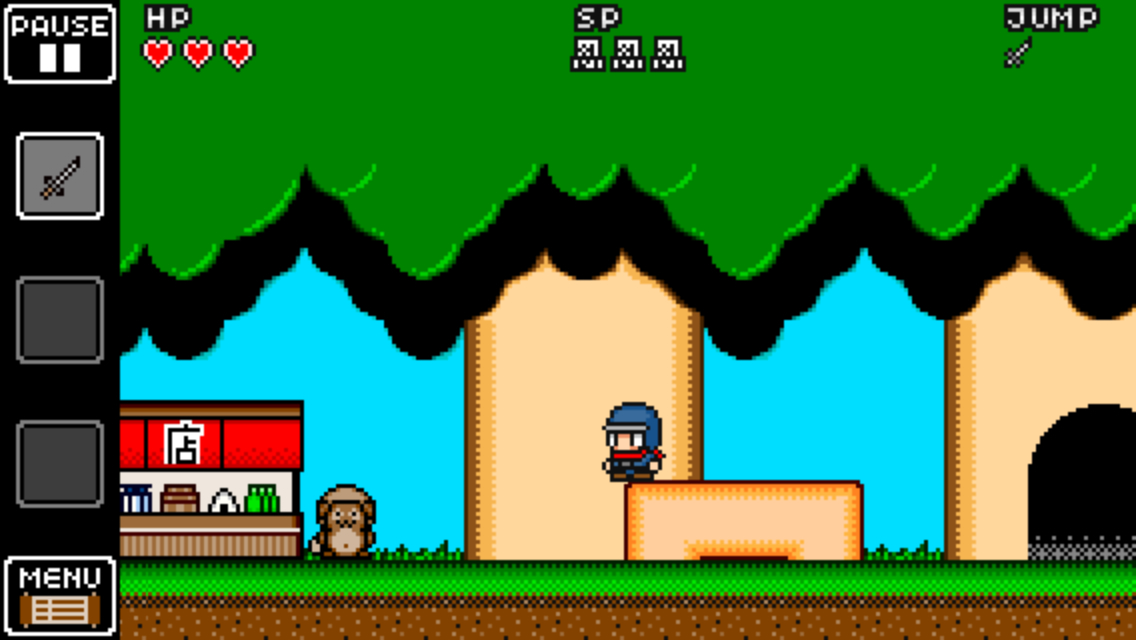 The game starts with you attacking the castle of the big boss to try to rescue the princess, only to get booted out. From here, you have to find all of the equipment and powers you’ll need to win your rematch. Most of these are found in caves, castles, and temples you’ll find in the overworld, but you’ll usually need the power from one of these places to open up the next, so there’s still a certain linearity to it. You’ll also be able to use these abilities to pick up extra upgrades if you hunt around the map carefully. You’ll also earn coins by killing enemies or just picking them up from around the world, and there is naturally an in-game shop where you can spend them on things like potions, shuriken, or permanent upgrades to your health and magic gauges.

The indoor areas usually have you searching out keys or switches to open up the path to a boss fight. The design is pretty smart about not having you backtrack too much, with most spokes depositing you back at the hub after you’ve picked up the necessary item or flipped the switch. The bosses are big and, from a certain angle, strong, but they’re more the sort that outlasts you with a big life bar than actually posing a serious threat. It’s rarely difficult to avoid their attacks, so once you’ve earned a projectile, it’s pretty easy to sit back and pick them off. In fact, for some of the bosses, this is probably the best way to win, even though it’s a long and somewhat boring process. It doesn’t help that to perform your melee attack, you basically have to block your view with your finger. In that sense, it’s probably better that the bosses aren’t more scrappy. 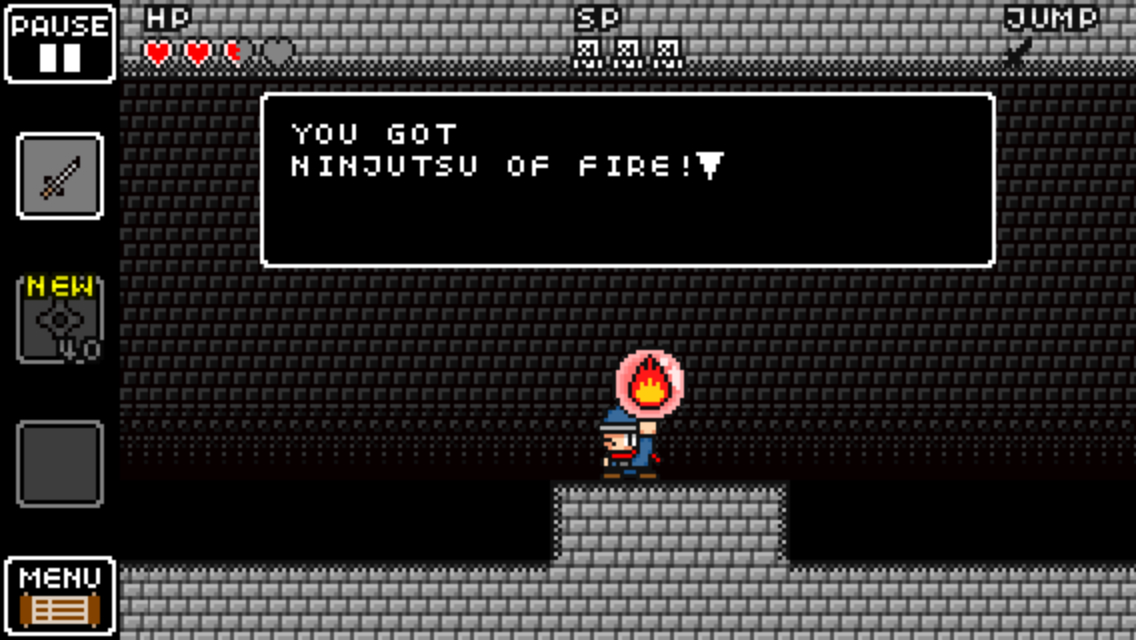 In spite of that particular issue, the controls work out better than you might expect, especially if you played Ninja Striker. It still plays similarly, with a tap anywhere on the screen propelling your little ninja in that direction and a tap on an enemy resulting in a sword slash, but it’s a lot tighter here than it was in the previous game. The ninja gets projectile attacks in this game that allow you to attack from afar, and while you start with just the ability to jump once and slash, after a few upgrades, you’ll be zooming around like it’s nothing. Having to constantly tap made the game a little tiresome in longer sessions, but overall, I barely had issues with the controls once I got the hang of them.

The game’s aesthetics fall somewhere between the NES and the Turbografix, so it’s definitely going for a retro vibe. There are lots of bright colors and surprisingly big variety of backgrounds. The music and sound effects are very much of that era as well. What is decidedly not of that era is the game’s bizarre save system. Like many games of this genre, there are regular places where you can save your game just by touching an item. It also heals you up to full, so you can’t really get stuck in a bad place. However, the game only comes with a single save file. That’s not so odd, but what is strange is that, via the game’s sole IAP, you can buy more save files. I mean, on the one hand, it means that the main game isn’t affected by the presence of IAP, but on the other hand, if you want to start a new playthrough after clearing the game but don’t want to erase your old file, you have to pay $0.99. It’s one of those lose-lose IAPs, because the game is poorer for having the feature stripped, but not so poor that I imagine many will pay for it. 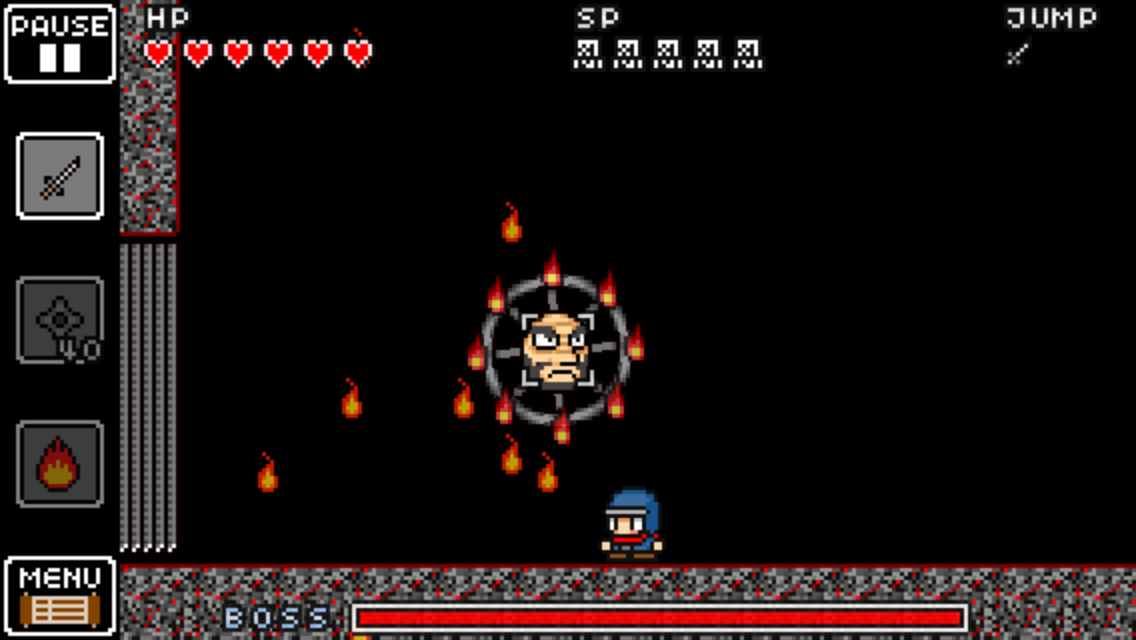 Even with that bit of oddness, it’s hard to be too down on Ninja Smasher. For just a couple of dollars, you get a fairly meaty adventure that plays well and rides a nice difficulty curve. I also appreciate how well it balances its desire to evoke nostalgic feelings with its use of modern game design techniques. It nails the faux retro thing just right. Moreover, it’s a really enjoyable game in its own right, making for another solid entry in what is starting to become a decent library in this genre on the App Store. Fans of vintage Japanese action games or Metroidvania-style adventures should definitely give this one a look.