It’s been a long trek from student project to full blown game concept and beyond, but Bedtime Digital Games has finally released their collaborative creation, Back to Bed($2.99) . Arriving on iOS just a few weeks after it’s steam release, this beauty is here to entice you with a graphical pedigree rarely seen on a mobile game. Even though the lionshare of intellectual stimulation offered by the game is by way of art appreciation, there is not much to get in your way as you take in the sights offered up by this title.

Back to Bed is a puzzle game with some real time action elements. You take on the role of narcoleptic Bob’s subconscious gardian. The protagonist is sort of like a pied piper of Sokoban(Free). Gameplay will test your ability to steer this sleepwalker only capable of walking straight, or when that fails, turning clockwise. The camera angle is lower than most puzzlers. While the beautiful visuals are on full display with the dramatic angle, you end up occasionally being unable to see critical squares making it difficult to pin point a spot you need to tap on. My annoyance at the control scheme is mellowed by the forgiving consequences of failing to get your sleepwalker to bed. There are only specific failure cases that require you to reload a level and the most common one, having the walker fall off the level, only results in the walker respawning. 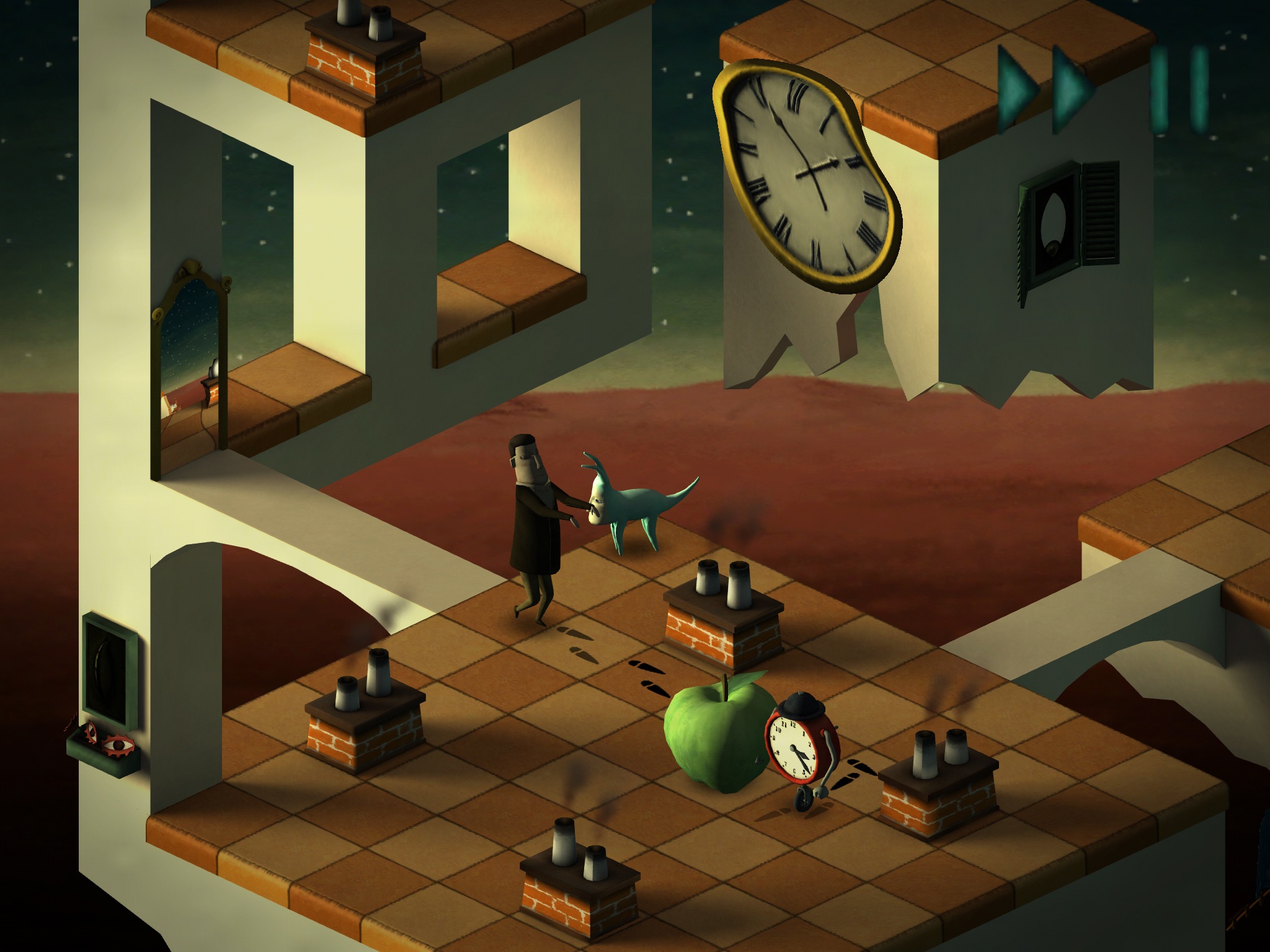 The nightmare difficulty level brings you back to previous maps but adds a pretty deep wrinkle by forcing your sleepwalker to grab a key before entering his bedroom. This doesn’t sound like much, but by having an additional objective on each map you are forced to completely rethink your strategy for each map. For the experienced puzzle gamer, this is where the real challenge begins. Maps that were easily passed have new complex paths that need to be traversed in order to pass. A lot of new game+ features in games are half baked, but nightmare difficulty is almost an entire new set of maps with the new twists and turns that must be navigated.

The premier feature of this game is most definitely the visual presentation. Borrowing largely from M.C. Esher’s Relativity and Dali’s The Persistence of Memory, Back to Bed firmly establishes its ambiance before you finish your first level. With an intriguing take on audio filtered through a dream state, the vibe is carried throughout the entire game. The appeal of the game is immediately on display as soon as you see the first screenshot of the game. As a double edged blade its not too bad, but you really are seeing the best side of the game directly at the onset. The story is paper thin, but the game has enough eye candy to compensate. 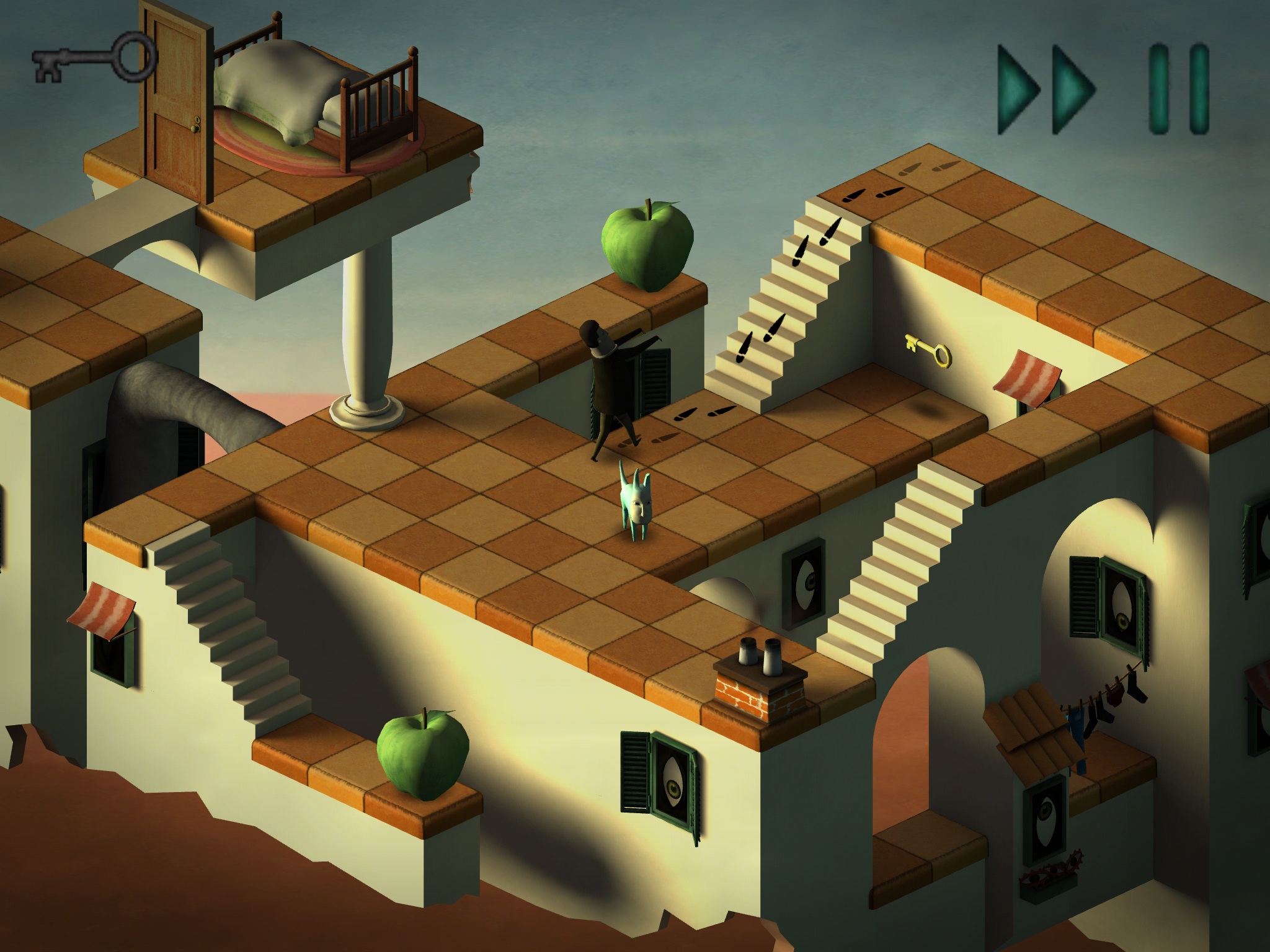 While controls have some hiccups from time to time, they are not enough to break the character of the game. As mentioned before, they could be better. For the majority of the game they are serviceable and do not get in the way of your intended actions. I enjoy the feeling of traipsing around an M.C. Esher painting, but sometimes I end up getting pulled away from the experience. Tap targets are a little smaller than I would prefer and it is not uncommon to end up tapping the wrong square, sending your sleepwalker over an edge or, even worse, into a death that forces a level restart. Our forums users have mentioned that mifi controllers work well with the game and it sounds like an improvement if this different control scheme is available to you. It seems like there is at least a partial sacrifice of control in order to deliver the visual experience. I don’t think a decision like that shows an informed approach to design but at the same time I do on some level respect the commitment to artistic integrity. At no point are short cuts taken when it comes to the art and presentation of the game.

Back to Bed has a relatively small target audience with decisions that were made to emphasize visuals over gameplay, but for that audience there is a lot of appeal. At $3.99 I would have expected a little more innovation instead of rote gameplay. I would have liked to see the inspiration go beyond a handful of pieces of art and into a wider selection including more artists. As a medium, games are increasingly a better way to convey art and it would have been really nice to see each level display maybe a new artwork or artist. It currently stands as an enjoyable journey through impossible reality worlds inspired by some of the most popular surrealists. The lines are blurred between art and game. If you feel like being caught between worlds, this is the game to take the trip with.