With all the gimmicks endless runners tend to have bolted on them these days, it’s sometimes easy to forget that it all started with just a simple score attack. No IAPs, no coins, no cosmetic upgrades, no power-ups, just an endless, increasingly difficult, randomized stage and a challenge to see how far you can go before inevitably failing. That’s not to say gimmicks are bad, as they can be quite a lot of fun. Just look at Jetpack Joyride (Free), which is so loaded with stuff you could almost forget about the goal of going farther in favor of collecting things and still have tons of fun. There’s something about that pure experience, however. It’s something I greatly appreciated in Boson X ($2.99), and it’s something I very much enjoy here in ALONE ($0.99).

Like most endless “runners", ALONE has a very simple premise. You’re in your spaceship, hurtling through space in a remarkably linear fashion, navigating what I suppose are space tunnels, and avoiding the various pieces of clutter that can be found in your path. The important thing is that you are going from left to right at an ever-increasing speed, and you need to make sure you don’t go splat too quickly. There are things happening in the background, as in Canabalt ($2.99), but just as in that game, if you stop to pay attention to them, you will die, so try not to get distracted. 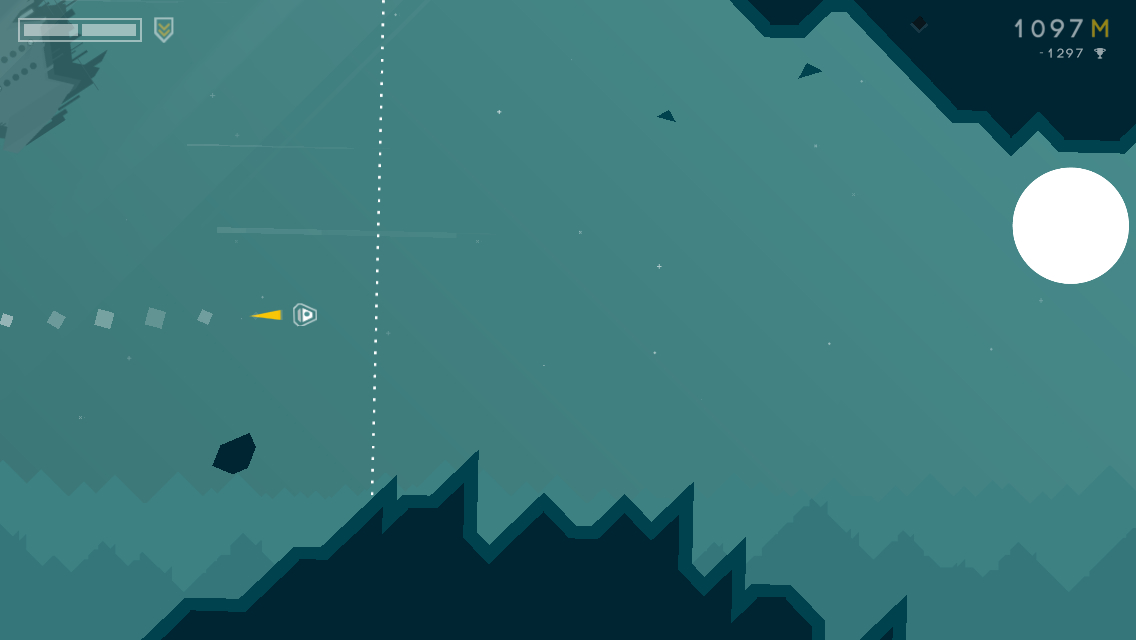 There are a couple of things that ALONE does to separate it from other games in the genre besides its lack of pink flamingos and lawn gnomes. The most important thing it does is to afford the player a bit of lenience, a rare sight in games of this sort. Your ship has a regenerating shield that will allow you to safely smash through certain objects. Too many in quick succession will still destroy you, but you can easily take a hit or two and keep going as long as you don’t run into anything else in the next half-second or so. If you hit the walls of a tunnel, however, you’re pretty much done in one. This is a great indirect way of telling the player to hang in the middle of the play area, which is an important survival tip. The extra bit of rope also helps the game feel like it’s on the player’s side when it’s actually plotting your demise.

One of the other big reasons why it’s important to stick to the middle is that your ship is a bit squirrelly in its handling. The controls are very sensitive, so the slightest movement of your finger can yield powerful results. You’ll need that ability to speedily move up and down the screen to survive, but it’s very easy to overdo things and crash yourself. It takes a bit of getting used to, but once you do, flying the ship feels very good, offering a level of agility that’s rare in the genre. By default, the controls are inverted, which felt pretty natural to me, but might chafe others. Luckily, there’s an option to turn off the inverted controls for people in that boat. I like the inverted controls because it ensures that my finger is never blocking my view of the ship. 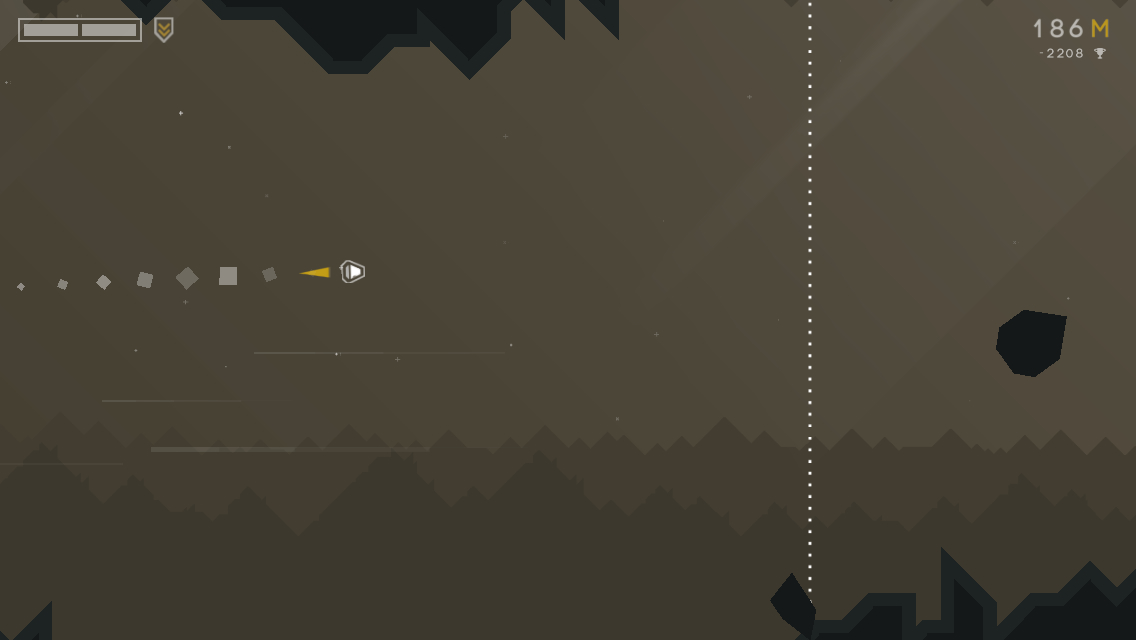 There are a few difficulty modes and a couple of bonus modes, but to unlock them, you need to reach a certain distance in the prior mode. Even the easiest difficulty isn’t going to offer up the goods without a bit of a fight, never mind unlocking the ones after that. It’s the one carrot the game dangles beyond the simple lure of getting a new high score, but since it’s directly tied to that same score, it just sort of blends in to the regular flow of the game. ALONE does a nice job of communicating your distance to you beyond just the number up at the top of the screen, too. There are lines that mark progress in chunks, a marker that shows when you’ve passed your highest previous score, and a full background color change every 1000M. The game also ramps up the difficulty at those 1000M milestones by throwing more aggressive obstacles at you.

The game opts for a simple look, using a limited palette to make the foreground objects stand out strongly against the background. That said, there’s still a fair bit of detail to be found in the backgrounds, if one only had the chance to look. Things are sometimes going on back there that you really can’t afford to watch, but if you do sneak a glance, you get the feeling of a greater world existing beyond your little slice of space. The soundtrack is fast-paced, beat-heavy, and keeps playing even after you die and restart. It does its job, along with a few simple sound effects for flavor. It’s rounded out by Game Center support with a leaderboard for each mode and a list of extremely challenging achievements to shoot for. 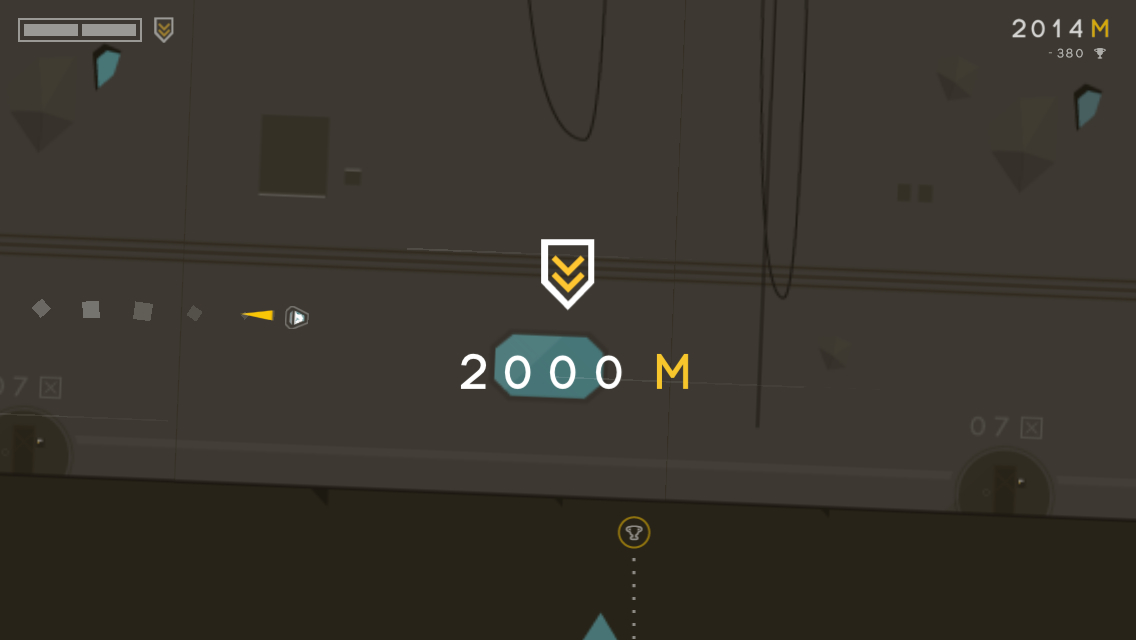 If endless games are your thing, you’ll definitely want to check out ALONE. It’s probably a bit too spartan to click with everyone, but there’s a lot of joy to be found in experiencing its clean design and mastering its unique handling. Allowing the player to make mistakes here and there and still continue on gives the game a strangely fair feeling, even though you’ll likely still crash out in under a minute until you get a lot of practice in. It’s one of the more compelling “runners" I’ve played in quite a while, and I expect it will join Boson X as a permanent fixture on my iPhone.