Okay, so I’m a typical SEGA fan. I complained about Sonic Jump Fever (Free) in my review, but I still ended up playing it a lot anyway. This, however, works out to your benefit, because since I’ve somehow unlocked pretty much everything, I’m in a great position to give you some advice about how to get the most out of this game with a minimum of pain and suffering. The core gameplay isn’t very deep, and if you’ve played a jumping game before, you’ve probably developed some skills that will help you out in this game. The game does have a bunch of unlockables and power-ups, though, and there’s definitely an optimal way of making use of those. Here are ten tips to help you score big in Sonic Jump Fever without losing your personal gold ring stockpile.

Unlock Amy as soon as possible. This is the best tip, so I’m giving it to you first. She’s not as expensive to unlock as Blaze or Knuckles, and she’s by far the best character in the game. Her jumping hammer attack not only takes out nearby enemies, it also collects any goodies it comes in contact with. Her wide reach makes it easier to score points, rack up combos, enter Fever mode, and collect things. No other character has anything that even remotely compensates. Don’t even waste your red rings on the others. 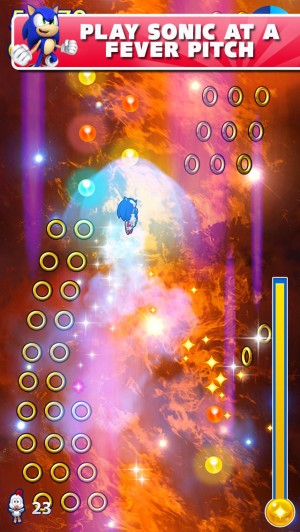 Make sure you get your free daily spin. The regular version of the spin doesn’t have much to offer, but as you move up through the ‘good’ and ‘great’ boards, the rewards start to get really good. You can win tons of red rings, free Chao searches, premium boost power-ups, or even a bunch of character tokens. Note that it’s not connected to the date on the calendar, but rather it’s that after taking a spin, you have to wait 24 hours before you get another one. It’s good to set this to a consistent time, like just before bed or when you’re on your usual coffee break.

Focus on either rings, points, or collectibles. You can’t have it every way during a run. Coins are over here, enemies are over there, grabbing that red ring will cause you to lose time, and all of these are at odds with each other. If you’re in it for rings, equip a ring-collecting Hero or Neutral Chao, and focus in-game on collecting the rings and triggering Fever mode. If it’s points you’re after, equip a Dark Chao, aim for all the bad guys, and focus on extending your combos so that you can trigger Fever mode as many times as possible. Don’t forget to free animal buddies on the way as they can boost your score significantly. If it’s collectibles you’re chasing, use the Chao that rescues you from falling, keep your eyes peeled, and avoid long combos because you can miss items if you enter Fever mode without collecting them.

Spend rings on upgrading your chosen character first. Upgrading your character increases the duration of the power-ups you collect in-game. It’s best to upgrade each of them on your chosen character until they’re at the point that the next upgrade costs 9,100 rings. Once you reach that point, just leave them be for now. You have bigger fish to fry with those gold rings. Be careful about upgrading every character, too, since every upgrade goes towards increasing the Fever meter for everyone. 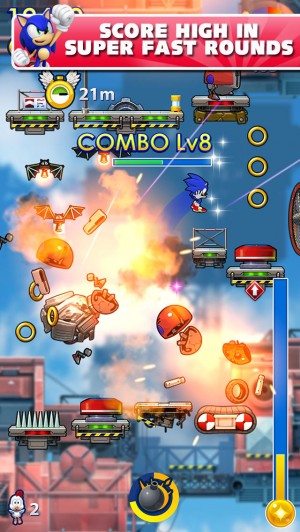 Don’t level up your Fever too quickly. Every time you increase your Fever level, you’ll move up the ladder of Fever patterns. Each pattern has a different distribution of rings and point bubbles. The higher your level becomes, the more those patterns tend to favor point bubbles over rings, severely cutting down on how many rings you can collect per run. If you trigger Fever more than once in a run, you can see what the next pattern looks like, and the one after that, and so on. When the rings start drying up, it’s not a bad idea to hold off on upgrades until you’ve amassed a bunch of gold rings.

Don’t pull a Chao without full energy. You can pull a Chao for 3,000 rings or by using a Chao search item won from the daily spin. Don’t use these unless you have full energy. The minute you pull a Chao, a timer starts counting down. You can only use the Chao until it expires, and playing with it goes towards permanently unlocking it. The level three Chaos give you a mere hour, so if you pull one with an empty energy meter, you’ve basically wasted half of your chances to use it. On a similar note, if you’re just getting in a quick game while waiting in a line-up or at the bus stop, it’s probably not a good time to use a Chao search. You want to be able to at least spend an entire energy gauge playing with it to get the most bang for your pull.

Learn the pattern of your Fever level. As I mentioned in an earlier tip, when you enable Fever mode, the patterns are always consistent with your Fever level. They’ll always have the same shapes and distributions of goodies, so you can just memorize them in order to make the most out of them. Fever mode is a great source of points and rings, so squeezing everything you can out of it is very important to achieving high scores. 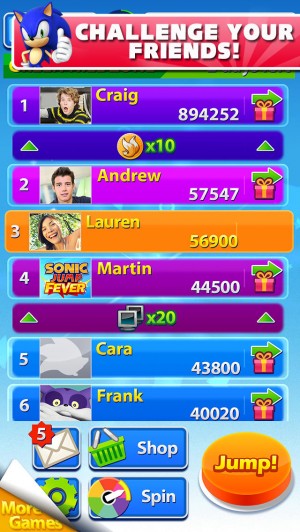 Hoard your boost power-ups for the right opportunity. Well, you don’t have to hoard all of them, but you’ll want to hang on to your best ones for when you have the best chance of making a high score. That means you probably don’t want to use them early on when you’re unlocking characters and powering them up. They’ll serve you far better when you’ve progressed your Fever level into the patterns with more point bubbles. You’ll also want to save your boosts for the right stage. The Jungle Zone is kind of a waste if you’re trying to earn a high score or go really far. The vines block your progress and between fly traps, vines that shoot out and pull you down, and collapsing floors, it’s easy to slip up here. The Mechanical Zone is far more open with plenty of things to keep your combo streak going. The Green Hill Zone is a pretty good place to make a high score run, too, but watch out for spikes.

Use effective combinations of boosts and Chaos. A particularly potent combo for gathering up a pile of rings is the level three Neutral Chao who collects rings and the Ring Streak premium boost that awards you extra rings for collecting every ring in a group. You probably won’t unlock that Chao for a while, so it’s good to have some Ring Streak boosts on hand for those times that you have temporary access to it. Quick Fever and Super Time Extend combined with an enemy-destroying Dark Chao will help you reach new scoring heights. Generally, Dark Chaos go hand-in-hand with boosts that help you earn more points, while Hero and Neutral Chaos are better mixed with boosts that help you collect more rings.

Aim carefully when flicking the animals at the end of a run. You might be tempted to just fling the animals willy-nilly to try to get as many in the basket as possible, but it’s a far better idea to take a bit of care in your aim. If you land consecutive animals in the basket, each subsequent one will earn you 100 points more. If you miss, they reset back to being worth a mere 100 points. Even if taking the time to aim means you only flick half a handful of animals instead of the whole lot, you’ll still end up earning a lot more points. If you manage to get into a fairly fast-paced rhythm of landing them in the basket, your character will wait longer before leaving the screen, giving you ample opportunity to earn a huge chunk of points. Don’t underestimate how much you can boost your score here.

If you follow these ten tips, you’ll waste less time and get to racking up the big scores sooner. After that, you can swing back around and pick up the other stuff, like the additional characters and extra character power-up levels. If you clear all of that out, might I suggest the original Sonic Jump ($2.99) while you wait for updates? Either way, good luck and happy golden onion ring hunting!