The Sonic The Hedgehog franchise has a tough line to walk. It’s still SEGA’s most reliable means of generating sales, and these days, that’s more important for that company than ever before. At the same time, the reputation of the character has taken a real bruising over the years from some of the more questionable attempts at leveraging his popularity. For what it’s worth, SEGA seems to be aware of the problem, and I would say a good half of the Sonic games released these days are quality efforts like Sonic Generations, the Christian Whitehead remakes of the classic Sonic games such as Sonic The Hedgehog 2 (Free), and Sonic & All-Stars Racing Transformed (Free). I’ll even go as far as to say that Sonic Dash (Free) was a pretty decent behind-the-back runner that only got better with updates. Then there’s the other side of Sonic, the games that are a poor fit for the franchise, just plain mediocre, or both. Here I’m talking about things like Sonic: Lost World, Mario & Sonic at the Olympics, and yes, the original Sonic Jump ($2.99) for mobiles.

Sonic Jump wasn’t a bad game, mind you. It’s an odd little anachronism, an updated version of a feature phone game from 2005 that nobody particularly cared for, released into a market that was up to its elbows in similar games. It’s one of those Sonic games where Sonic doesn’t do any running at all, a surprisingly well-populated category for a character whose fortune was built on running really fast. Sonic Jump is a serviceable entry in the auto-jumping subgenre, but that’s pretty much all it is. Apart from some boss levels added in after the fact, there was nothing going on in the game that hadn’t already been done a million times before, and it just felt like an odd fit for Sonic. Nevertheless, people clearly liked it, because it’s been a pretty big hit for SEGA. 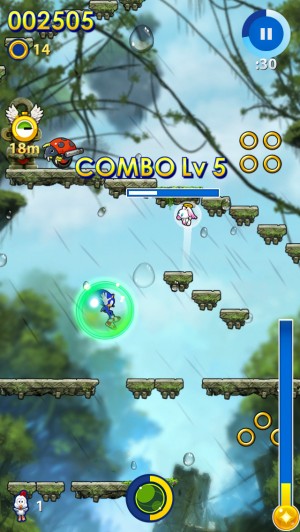 That’s probably why I’m looking at a 2014 game from a major software publisher starring an incredibly popular character that feels like it crawled out of the last decade in almost every respect. But while the gameplay might be right out of 2009, the monetization model in Sonic Jump Fever (Free) is distinctly modern, with an upfront price tag of free, and a whole lot of catches to try to make sure it doesn’t stay that way. Shockingly, I feel like this could have worked, but the game trips over its feet in a couple of ways, leaving us with yet another Sonic game the world could surely have lived without.

I probably don’t have to go too far into the details of the gameplay. Just about everyone has played Doodle Jump ($0.99) or one of its dopplegangers, and honestly, if you’re reading this review, you probably own Sonic Jump. Basically, there’s a vertical stage filled with platforms, enemies, rings to collect, and hazards to avoid. Sonic automatically jumps, and you can tilt your device to move him left or right, or tap the screen to do a double jump. You can pick up some power-ups along the way that will help you gain ground faster or rack up more points. In this game, rather than play through preset levels as in the first, you’re simply ascending a randomly generated infinite level until your time runs out. It’s a bit like the Arcade mode from the first game, except getting hit only costs you time. At certain intervals, you can break through some tape to get a time extension, and racking up a lengthy combo will eventually activate your Fever meter, allowing you to collect a bunch of rings and points as your character dashes through the air.

Although I’m using Sonic’s name, you actually don’t even start with Sonic. Instead, you play as Tails, with Sonic available as a relatively cheap unlockable character. The other available characters include perennial favorites Knuckles and Amy, as well as the curiously omnipresent Blaze the Cat. Unlocking these characters requires you to collect either a ton of character tokens or a ton of red rings, both of which are strewn about as you play, but with a hard limit of each per 24 hours. It’ll be a long while before you can afford to get even one of those characters without paying real money, so all you Knuckles fans out there may want to plan accordingly. The characters have some minor initial differences, and each one has to be powered up individually using your rings, so they’ll only diverge more over time, since upgrades are rather costly so you probably won’t be keeping everyone up to spec. 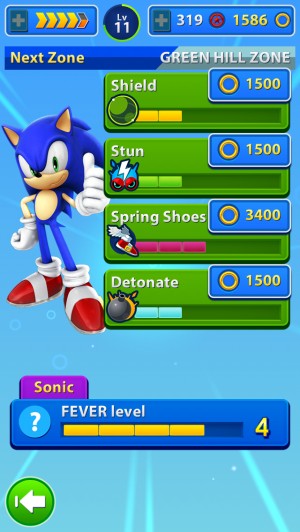 That’s not the end of the unlockables, however. There are also Chaos, little helpers that you can bring with you for various effects. The game will give you the first one for free, with subsequent Chao eggs costing 3000 rings for a random pull, a fairly hefty sum. Oddly enough, even once you’ve paid that ring fee, the Chao isn’t yours to keep. You have to build affinity with them by using them in the stages, and the more powerful the Chao is, the longer this takes. The problem is, you have a hard time limit to build that affinity in, and once again, the more powerful the Chao, the tighter that time limit will be. You can conceivably pitch a whole ton of rings into the fire as a result. If you can’t quite build up that affinity in time, you can always make up the difference with a metric ton of red rings, of course.

I know what you’re thinking. You’re thinking you are a tenacious gamer, and you will play as many games in a row as necessary to earn that Chao before the timer runs out. It’s a noble plan, to be sure. Unfortunately, I haven’t told you about the game’s stamina meter yet. It has five bars to it, and playing consumes one bar, regardless of your performance. When it runs out, you can pay a chunk of red rings to fill it up, bug your friends on Facebook, watch a video ad to restore one point, or simply wait, to the tune of about 20 minutes per bar. If that’s too long for you, you can pay $3.99 for an IAP that speeds it up a bit, but you’re going to end up waiting regardless, since play sessions are fairly short and the timer on a single bar remains longer than the time spent consuming it.

In case you can’t find enough ways to spend your currency, there are also boosts available, and quite a wide selection at that. Some of them cost a chunk of gold rings, while others cost red rings. Since they’re boosts, they’re just one shot items, so you’ll probably want to be careful about tossing your money in the fire pit given how many more important things there are to save up for. Like Sonic Dash, there’s a prize wheel you can spin once a day that will often cough up boosts, and if you want, you can spin it more than once a day by paying a stupid amount of red rings or, once per day, by watching a video ad. 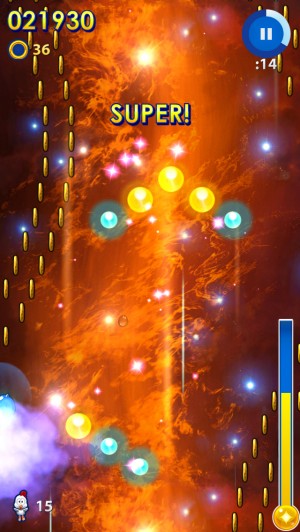 Speaking of video ads, until you buy an IAP, you can expect a video ad after each and every round. This is exactly as annoying as it sounds, and given the brevity of individual rounds, having one come up every time is just awful. If you catch one of the limited offers, you can make those ads go away for as little as $0.99, which will also net you a seemingly large amount of rings that in reality will not buy you much of anything. A wiser purchase might be the gold ring doubler at $1.99, but at that point, you’re within a dollar of the price tag on the original Sonic Jump, which offers almost the same type of gameplay in its Arcade mode, includes a Story mode, and gives you the obvious benefit of not having to deal with most of this monetization fluff.

That’s kind of the bottom line on Sonic Jump Fever. While there are a few positives to it, such as nicer graphics, speedier play, the fever mechanic, and the idea of a time-based endless mode, it’s ultimately an inferior game to its already-questionable predecessor. It’s free, so it has that going for it, but the frequency of the video ads makes the game nearly intolerable without ponying up for at least one IAP. I haven’t even mentioned the fact that the stages only roll over after a certain amount of days, so you’re stuck playing a single stage theme with a limited amount of variability for quite a long stretch of real time. It gets old pretty quickly. If for some reason you really want to play a Doodle Jump game with a Sonic skin, grab Sonic Jump. If you want that, don’t want to pay, and are willing to put up with extremely extensive monetization aspects, I guess Sonic Jump Fever has you covered.