Siralim (Free), the rookie effort from Thylacine Studios, is hard to fit into a box. Well, it’s easy to fit it into a big box. It’s definitely an RPG of sorts, but from there, it doesn’t fit neatly into any of the sub-genres that we perhaps too gleefully like to use to organize these things. It’s an odd fusion of elements, a stew made of up various pieces of different types of RPGs. Games that try this kind of thing run a high risk of ending up with something almost entirely inedible, but on very rare occasions, everything comes together nicely, creating a dish that is both familiar and fresh. You know, I’m kind of hungry. I’m going to get a sandwich and then come back and tell you why Siralim is an awesome game without using food metaphors.

Your first impression of Siralim is probably not going to be a good one. I’ve certainly seen worse-looking RPGs, but the plain graphics and problematic UI are likely to leave you feeling sour before the game is very far underway. You’re given a brief chunk of story to get you going, describing the world of the game and your role in it as the new ruler of Siralim. Your job is to fortify the kingdom by acquiring resources and shoring up the military with monster recruits. After an optional but highly useful tutorial, you’re free to go on your way, whatever way that may be. You can explore around Siralim Castle or you can head out to one of the Realms using a teleportation device and get started on your quest. 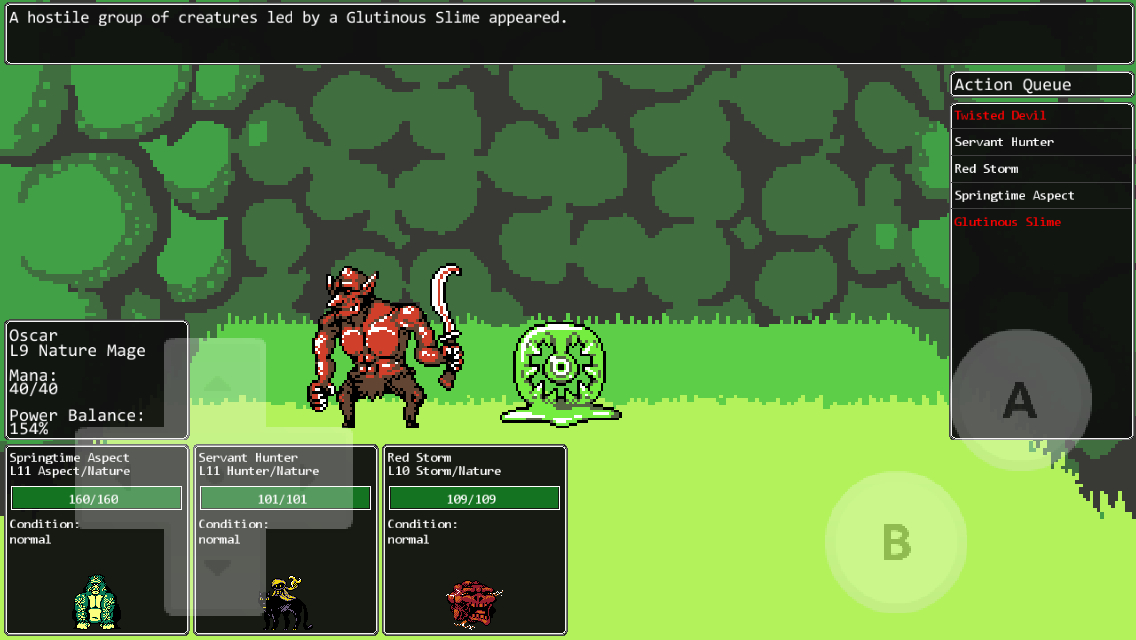 It’s a never-ending quest, by the way, and one of the many interesting choices the game makes in its design. There is no actual defined end state in Siralim. You can set your own goals, like catching all of the monsters in the game, building up your castle completely, defeating all of the super-hard bosses, or simply getting as far as you can in the increasingly difficult random dungeons, but the game will never take you aside and tell you it’s over. It’s an odd thing to wrap your head around initially, but once you get into the nuts and bolts of the game, you won’t care too much.

Siralim is a monster-catching RPG with turn-based battles. It’s also a base-building game where you’re constantly adding new rooms and features to your home castle. It’s also kind of Rogue-like with its randomly generated dungeons and loot, which you can supplement by turning on permadeath when you start the game if you like. There are also robust crafting and enchantment systems. New elements are introduced as you level up and invest in your castle, meaning there’s usually something new around the corner no matter how far into the game you are. I want to give a special tip of the hat to the design here. If all of these systems were thrown at the player at once, there would be a high chance of people being overwhelmed, so the measured pace at which new aspects are revealed in Siralim works just about perfectly. You have just enough time to come to grips with the last new thing before the game gives you something else to juggle. 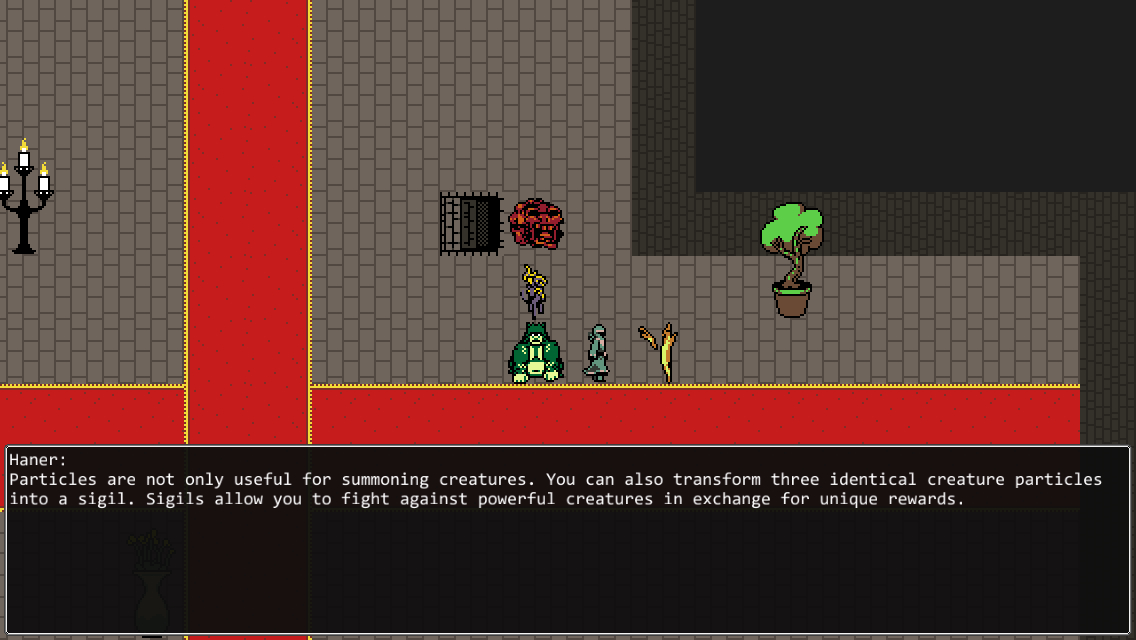 To start, you really just have to focus on summoning and leveling your monsters. Summoning a new monster requires three particles of that monster, among other materials. Particles can be obtained in a variety of ways, but the most common and reliable method is by using the diffuse command on a weakened enemy monster. The game will give you a couple of monsters to start with, but to get more, you’ll have to venture into the Mysterious Realms, a series of random dungeon floors that get more difficult the deeper you descend. Once there, you’re given a task to perform, such as killing a certain number of a particular monster, or finding a specific treasure chest, but beyond that, it’s up to you what you want to do.

Each floor is populated by some groups of monsters that you can see on the map, along with some treasure chests, a teleporter to the next floor down, and a few other surprises. You can return to Siralim Castle anytime you want by opening a portal, at the cost of a little bit of energy, and zip right back using the same portal. You might try to approach the game in a linear fashion, seeking out each new teleporter and moving ever deeper into the Realms, but you’ll learn why that’s a mistake pretty quickly. At first, the game goes positively easy on you, with enemies much weaker than the monsters in your party, but soon they’ll not only be of a higher level than you, but they’ll also be equipped with items to create some devastating combos. Go too deep too soon, and you’ll only end up with a one-way ticket home in a pine box. 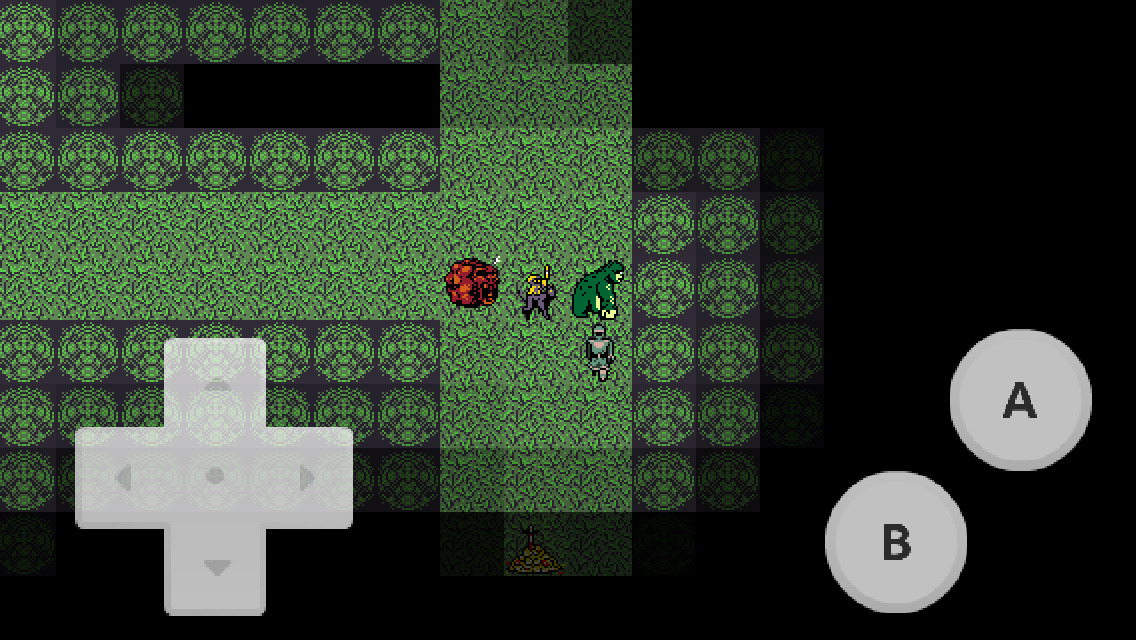 The key is to spend some time on lower floors, gathering up monsters, items, and materials to become stronger. An important part of that growth is in developing Siralim Castle itself. As your level rises, you’ll have the option to add rooms onto your castle that open up new things like an arena or new NPCs like the blacksmith or the enchanter who can help you tweak your gear. Eventually, you’ll come across the game’s crafting system, giving new use to those little bits and bobs you’ve been collecting. Expanding your castle also causes new things to pop up in the Realm dungeons. Watching your castle grow as a result of your hard work takes a great deal of sting out of the potential grind that might otherwise set in.

The game gets pretty challenging as you go along, and eventually you’ll have to carefully plan your party setup and handle each battle delicately. It’s probably bit too difficult for its own good in the long run, but I always appreciate turn-based RPGs that give me a little tussle, since they’re more rare than they ought to be. I love all the extra settings for making the game more difficult, random, and, as a result, complex. I also like that that difficulty bump isn’t just a stat boost for monsters, but also allows them new abilities and tactics. It’s very clear this game’s systems were designed by a serious student of the genre. 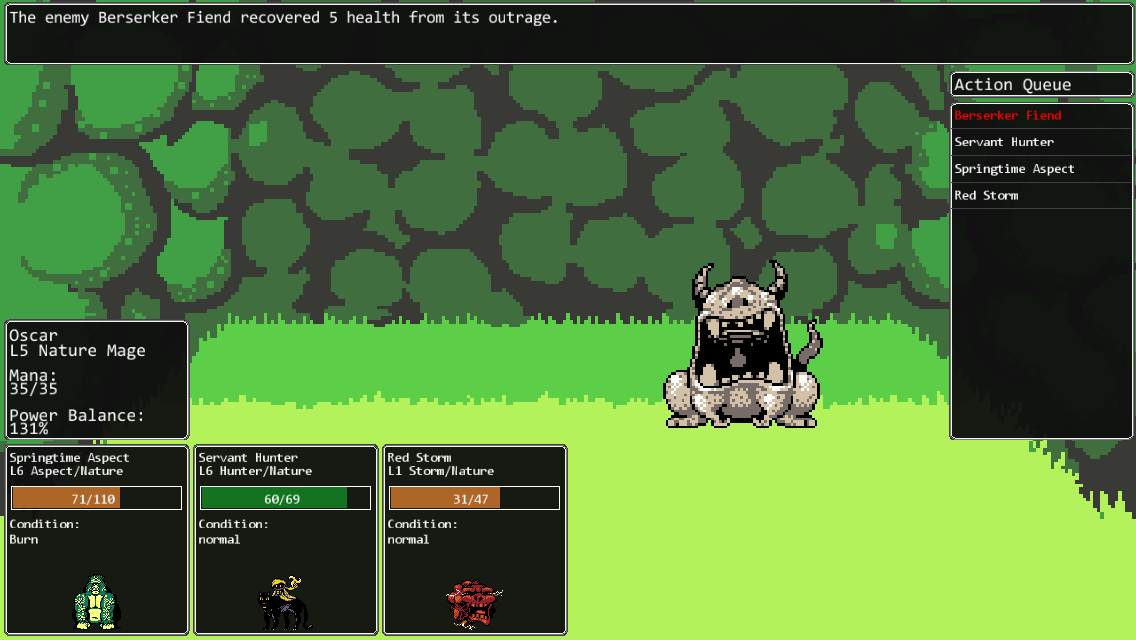 While the depth, breadth, and balance of the game’s systems show a veteran touch, the rest of the game is a lot more rough. The game has a tendency to slow down in open areas of the dungeon. The user interface suffers from using a tiny text size, making it a little hard to read if you’re playing on an iPhone. It could also benefit from more at-a-glance information, especially once you’ve got gathered a lot of monsters and equipment. The controls, which use a virtual directional cross and two buttons, are pretty fussy, making it a bit annoying to navigate dungeons and menus alike. Siralim is also visually inconsistent, with lots of little details and some cool monster designs balanced against some truly lame monsters and a lack of variety in the backdrops. It looks sort of like an old computer RPG, and while it grew on me, I wasn’t very thrilled with it initially.

There’s a lot more I could go into here, but this review is already getting a bit long. Siralim is a fun, complex, well-designed RPG for the on-the-go fan. If you’re looking for story, you won’t find much here, but if you’re the sort of player who appreciates a good collectathon or deep team-building, you’re likely not going to be able to put this one down for a while. In a very cool move, you can play Siralim for free, with a level 15 cap in place. If you want to proceed beyond that, you can pay a one-time unlock fee of $4.99 to open up the rest of the game. Since it is a rather unusual RPG, it’s nice to be able to give it a try before committing. It’s made a good splash in our forum, and with good reason, in my opinion. It’s rare to see a first attempt at this genre come off so well.