Every once in a long while, things converge in this hobby in such a way that I almost feel the resulting game was aimed right at me. I’ll confess, I was on top of this game as soon as I saw it was The Powerpuff Girls. I can’t explain why watching three super-powered kindergarteners beat the crap out of a hyper-intelligent megalomaniacal talking monkey is awesome. I shouldn’t need to. Next, I saw that word used to describe it: Metroidvania. That term gets tossed around a lot, and even though most of the games that invoke it rarely deliver, I’ll still show up every time, because I miss Metroid and Symphony-style Castlevania games. Finally, as a ridiculously unnecessary coup-de-grace on the whole thing, I saw that it was developed by none other than radiangames, who have a very fine catalog of games on the App Store, including the recent Fluid SE ($1.99) and JoyJoy (Free). They’re a developer I trust enough to buy their games as soon as they appear, no questions asked.

With so many great things coming together, my natural reaction is to start waiting intently for the other shoe to drop. Luckily, after playing through both modes of Powerpuff Girls: Defenders of Townsville ($3.99), I’m still walking around with one shoe. It has some problems, some of them expected and a few not, but overall, this is a really enjoyable action-adventure that uses its license well. We’re given the story of the game in a cut-scene, fully voiced by the show’s actors. The girls are fighting Mojojojo yet again, but this time he has a new trick up his sleeve: a beam that causes the girls to forget how to use all of their powers. After being zapped, the girls fall from sky, separated and powerless. Well, it’s as a good reason as any to have the main characters running around looking for abilities and power-ups. At least we don’t have Buttercup having to phone in to Professor Utonium to get permission to use her punching ability. 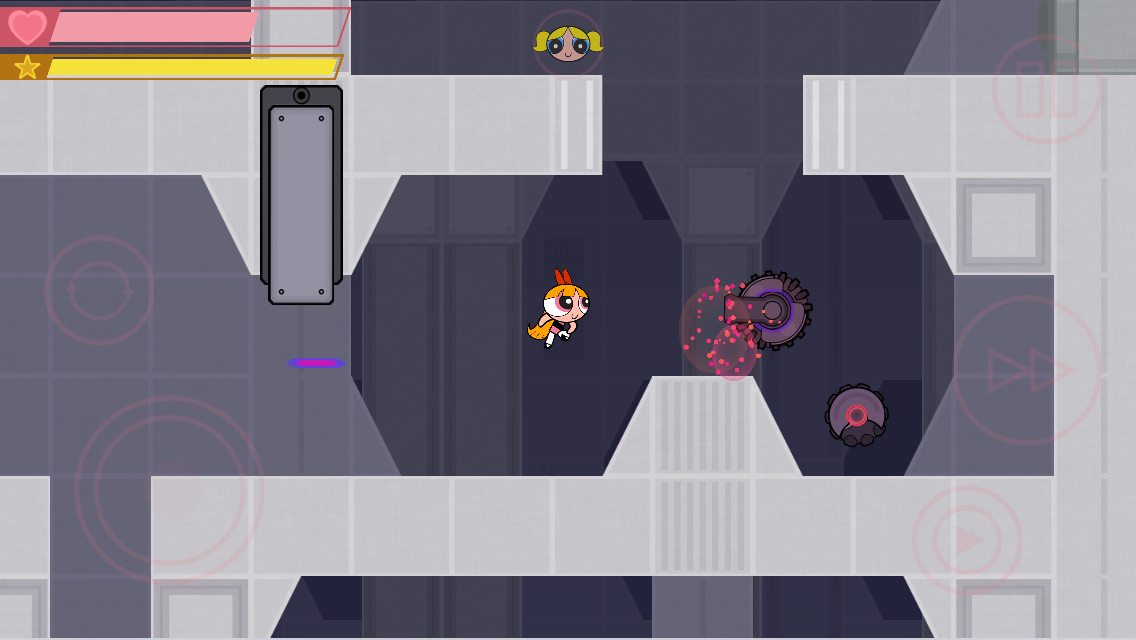 At the start of the game, you’ve only got control of Buttercup, and she can’t do anything except walk left and right. You’ll soon regain the ability to punch, and while the genre-savvy might expect the next ability you unlock to be jumping, fans of radiangames and The Powerpuff Girls can probably make a better guess. The Powerpuff Girls don’t jump, after all. The game wisely gives you the ability to fly almost from the get-go, and this is where the game starts feeling a bit more familiar for fans of the developer’s other efforts. That point is hammered home when you unlock other special powers that let you shoot beams from a distance instead of having to get in close and take your chances with the somewhat clumsy melee attacks. From then on, this essentially becomes a more action-packed shooter take on the Metroidvania formula. Rooms are packed with robots to destroy, and the game even helpfully marks off the rooms where you’ve blown everything up at least once, tossing you the occasional reward for doing so.

Broadly speaking, your goal is to find the other girls, rescue the Mayor, and take down Mojojojo. You’ll have to make your way through three large areas to do so, but as is normal for this genre, it’s not simply a matter of point A to point B. Certain room exits are blocked off until you regain specific powers, so you’ll have to explore around to find the ability you need, and then remember to come back and check out what’s waiting. The game is very helpful in this regard, offering a useful map that shows the rooms you’ve been to, their exits, and whether or not you’ve found everything in that room. It makes it easy to see where you need to go once you’ve received a new power, though you’ll still have to do the legwork in getting there. The map certainly isn’t huge by the standards of the genre, but the lack of any warping abilities can make it a bit of a pain when you want to backtrack.

The developer has really nailed the formula well, compelling you to stick with the game just a little longer so that you can collect the next power-up, and then the one after that, and so on. There are just enough goodies scattered around to keep you coming back to areas, and having some of the power-ups connected to clearing the rooms of enemies adds to the fun. You have to track down all the enemies in the room just to be sure you didn’t miss out on a power-up, so you have incentive to fully explore each area and fight all the bad guys. The abilities you acquire to unlock new areas aren’t simply keys, either. In almost all cases, they serve a double purpose, offering you greater mobility or useful ways to attack the enemies. That’s one of the important elements to making a game in this sub-genre feel well-designed, so I’m happy that’s been handled properly here. 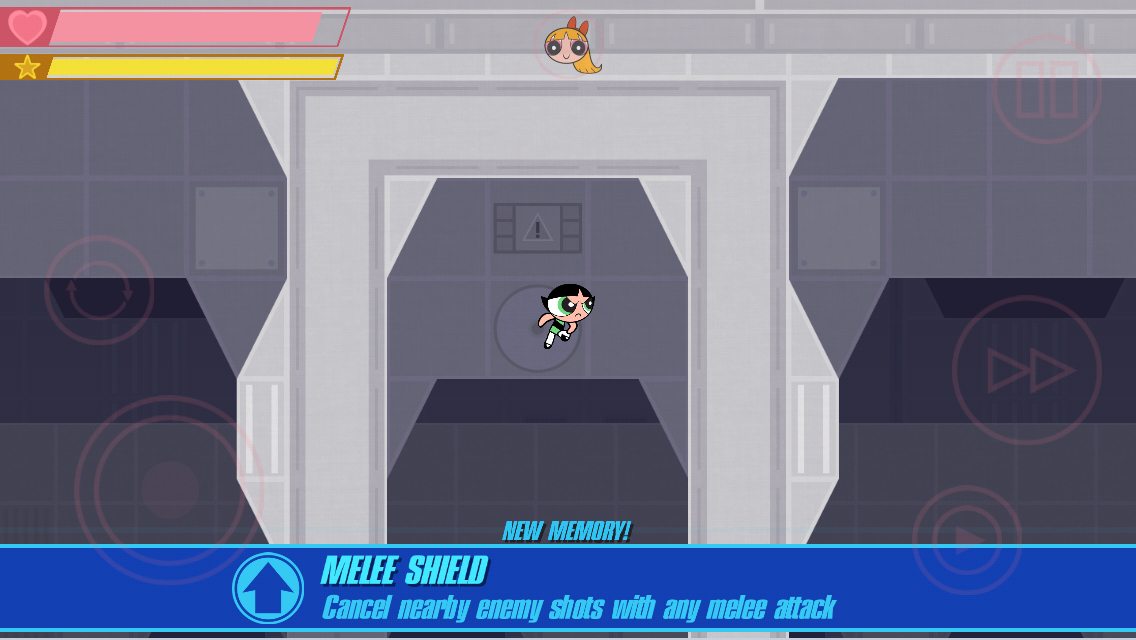 I do have a couple of complaints on the gameplay side of things, though. The biggest one is with the aiming. The game will automatically direct your shots to, theoretically, the nearest threat when you press the fire button. Its heart is in the right place, but in practice, it frequently has you firing in the oppposite direction from where you’d like to be. It’s an issue regardless of whether you’re using touch controls or an MFi controller, and while the main game mode is pretty forgiving for the most part, in harder difficulties, it can be absolutely maddening to die from something just to the left of you because your character is trying to shoot something way off on the right side of the screen. I’m also not terribly thrilled with the boss battles, either. They’re somewhat toothless and don’t fit the license all that well. It would have been much more fun to have at least one battle with a small, agile opponent with similar power to yours. I mean, we’ve got the Rowdyruff Boys just sitting over there collecting welfare checks.

The game is a bit shorter than the more famous members of the genre, but I actually didn’t mind the length. You’ll probably completely finish the main mode, Defenders of Townsville, within a few hours at the absolute most. You’ll unlock another mode by doing so, and there are more difficulty settings to play on, so it’s not like it’s completely over after you’ve finished the story. In the context of the genre on the whole, its length is about average. Of course, I’d love if the game were two or three times the size it is, but creating this style of game is complicated and it gets exponentially more complicated the bigger you make it. At the size it’s at now, you’ll probably be a little hungry for more when you finish, but that also makes it ripe for replays.

Outside of my problems with the stop-helping-me auto-aim, the controls in Powerpuff Girls are quite good. As you would expect from radiangames, the virtual stick and buttons are very responsive, and the UI is thoughtfully designed. If you happen to have an MFi controller, you can play it with the same control setup found on the PC version. I preferred using the controller, but I made sure to play thoroughly with both styles just to confirm that the game controlled well either way. 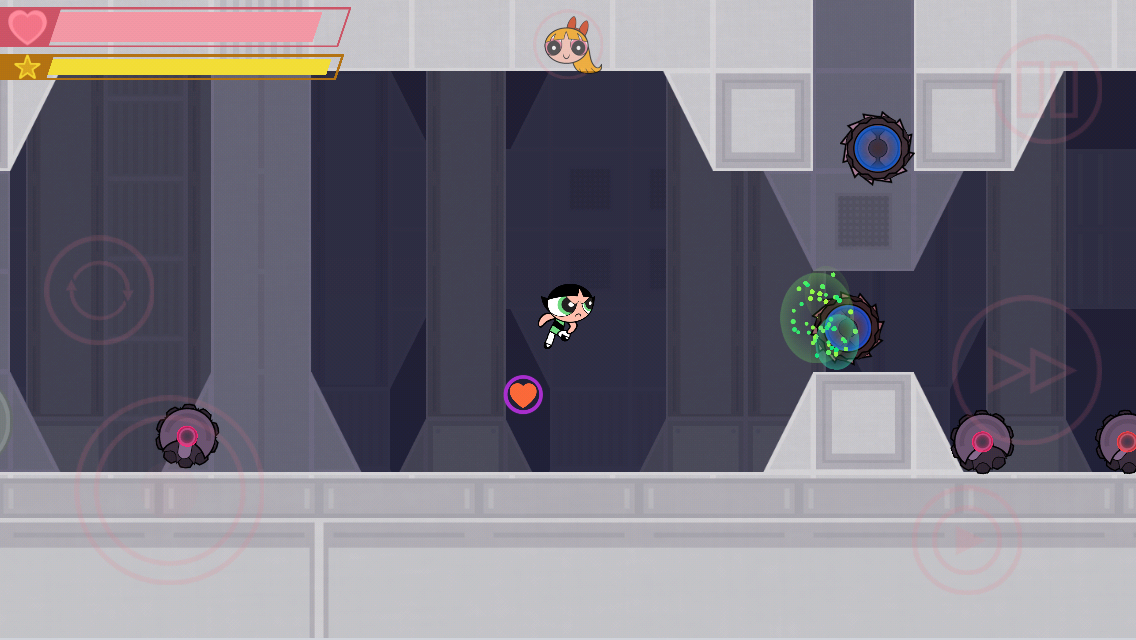 The game’s presentation actually offered a few surprises for me. First, I was extremely happy to be able to choose between the proper versions of the characters and the horrifying CG hellmouth versions, and was quite surprised to see that my choice was reflected across the entire game. Classic mode looks more simple and clean, while hideous monstrosity mode has a lot more detail in the backgrounds and enemies. Visually, everything is just about perfect. The look of the characters and the way they move are exactly as both should be, and the game generally runs quite smoothly. There were a couple of particularly busy rooms where things slowed down just a little bit, but nothing too serious.

I was also happy to hear the whole cast reprising their roles, because Mojojojo just isn’t the same without his voice. Unfortunately, the voices have a touch of the 1990s going on, where the characters speak and make sounds constantly during the game, but the clips are drawn from a very shallow pool. Expect to hear the same two quips repeated again and again from each girl. The sound effects show the same careful attention to detail that the graphics do, with all of the special moves the girls pull off sounding just the way they do on the show. One less pleasant surprise was the music. It starts off well enough, with a chiptune rendition of the show’s main theme, but the actual in-game music borders on annoying. It’s weird because radiangames usually nails things on the audio side, but I actually had to turn off the music after a while because it was boring a hole into my brain.

As Jared said in his Game of the Week write-up on the game, you don’t have to be a fan of Powerpuff Girls to enjoy this game. It’s a well-made entry into the genre, and one of the very few that does a straight take on the concept instead of merely invoking the name because there’s a hub and a few secrets. It’s also complete without any IAP, and of reasonable length for the type of game it is. If you do happen to be a fan, you’re going to be thrilled. The Powerpuff Girls have had quite a few games over the years, and not one of them has been very good at all. Well, that’s changed. Apart from some minor issues with the controls, boss fights, and audio, I can’t think of much to say against this game. Pick it up and prepare yourself for the best rainy day adventure ever. Well, maybe the second best.