You can file this one in the “better late than never" folder with Blek ($4.99). A Dark Room ($1.99) released several months back, but due to a horrific accident in the TouchArcade break room involving the microwave oven and a can of non-dairy powdered cream, it fell between the cracks. Well, I stuck a piece of chewing gum to the end of a stick and pulled this interesting little game out of that crack. I also found my keys. I’m glad for both, since not only can I get back into my home, I also got to enjoy a really unusual and entertaining adventure. It’s one of those games that you finish and want to talk about almost immediately, and so, here we are.

There’s just one problem with talking about this game, though. A lot of the enjoyment is in the surprising turns it takes, and even telling you that much feels like I’ve gone and spoiled something. The description in the App Store offers very little information, and just one screenshot that offers about the same. I’ve talked before about games that focus on giving you an experience, and this is very much one of those. If you want to enjoy the experience of it in pure form, please click the link in the first paragraph to buy the game, then hit the back button in your browser and don’t come back here until you’re done playing. It’s definitely worth the asking price. 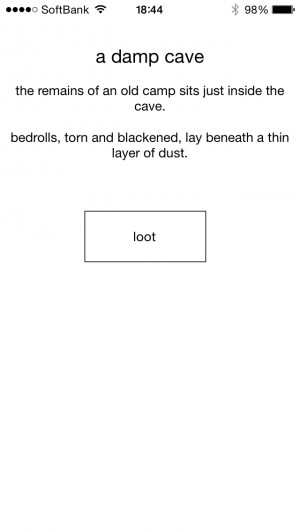 I’m going to assume if you’re reading from here that you’re not the type convinced by experience alone and you want to know more about what kind of game this is, or you’ve already finished the game and are just reading this because reading stuff on the Internet is fun. Either way, I’m going to go into gameplay spoilers a bit from here, but nothing specific about the story. This is your last chance to turn back and enjoy the game as it was intended.

A Dark Room gives you virtually no instructions. When you start the game up for the first time, you are presented with a black screen that offers only one choice if you want to proceed: lighting a fire. With your fire lit, you’re now able to see the room around you. To keep your fire lit, you’ll need wood, and with your newfound visibility, you’re able to make your way out to a nearby forest and collect some. Once you have enough wood, you’re able to build new structures that open up more building options, and the whole game starts to feel a bit like Cookie Clicker. That’s not a bad thing, but it’s also nothing special. Keep at it a while longer and you’ll have an actual town forming, with the citizens providing their services to help resources flow. Occasionally, there will be events that either give or take away some of your resources. Keep on accumulating and growing, and eventually a shopkeeper will sell you a compass, allowing you to leave the safe confines of your village and make your way out into the world.

At this point, things take on a decidedly RPG-like tone. You explore a map, enter mini-dungeons, fight battles, and collect resources. Somewhat similar to the old Ultima games, you have to take care that you don’t run out of food or water on your trip, and you can only haul so much at one time. Each cleared dungeon becomes a safe resting spot for future journeys, allowing you to refill your water and food so that you can head out just a little bit farther. Should you perish one way or another, you’ll find yourself back at your town, minus everything you were carrying when you died. Explore around and bring back treasure from these trips, and you’ll unlock even more new stuff back home that will strengthen you for future trips. Just don’t forget to feed your fire whenever you’re back in town. There are a couple more gameplay twists, but I want to leave some surprises. 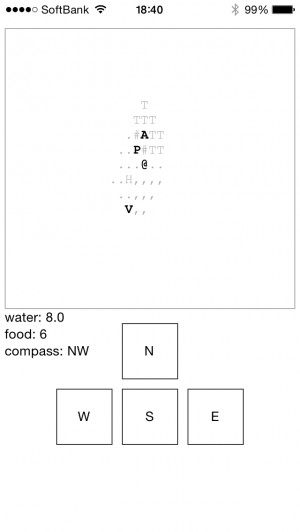 The story weaving through the whole thing is pretty cool. Like many elements of the game, it’s very minimalistic, but it establishes a nice mood, leaving you in the perfect state of mind for the bigger plot moments to have the maximum impact. Your first time through the game will probably take at least a few hours, though it’s certainly possible to do it a lot faster once you know what to do. With so much of the game’s enjoyment riding on experiencing its unpredictable story, you might wonder why you’d ever play it again after you finish it, but the game does provide some incentives for at least a second run.

As for the graphics and sound, the game sort of doesn’t have any. Sure, you get an ascii-style representation of the world map when you’re wandering outside the town, and there is one other part with some interesting, although rudimentary graphics, but other than that, the game is presented entirely in text. I think the basic visual style works well for the game, giving it the feel of an early PC game. Things were a lot less guided in games of that time, and the confusion that A Dark Room deliberately invokes was more or less the norm. I’m not sure if I’m so keen on the game’s lack of sound, however. I think having music playing all the time in the background would be a bad idea, but some kind of ambient effects, even a beep or blip here and there, could add to the atmosphere without disturbing it. I suppose you’re at least free to listen to whatever music you like without worrying that you’re missing out on something in-game.

It’s a strange little thing, to be sure, but I’d definitely recommend A Dark Room to people who appreciate off-beat RPGs, fans of experience-driven games, or really anyone looking for something a little bit different from usual. It’s confusing and weird, but in a good way. If it doesn’t click, you’ll probably hate it, but if it does, there’s not much else out there quite like it. The full range of emotions and impressions can be found in the thread in our forums, but you really should just go and play the game yourself before reading anything more. Peeling back the layers yourself is a big part of the fun.