Cipher Prime Studios has amazed us before with hits such as Fractal, Splice and Pulse, each exploring various avenues related to puzzle and music/rhythm gameplay. With Intake: Be Aggressive ($2.99), Cypher takes aim squarely at the arcade/shooter genre and hits the mark beautifully. Frenzied visuals, fast-paced gameplay with the right amount of strategy, and an awesome soundtrack make for an excellent iPad experience that’s well worth picking up.

Combining quick reflexed touch-based action with color matching strategy, Intake’s gameplay strikes a great balance between frenetic and strategic. Simply put, vitamins continually roll down the screen towards a danger zone at the bottom of the screen. Let a vitamin escape and the game is over. Where the color management comes into play is when you actually tap the vitamins. Vitamins of two different colors fall during a level and the goal is to tap the vitamins that are the same color as the danger zone (tapping the danger zone switches the color to the other side). Levels advance by tapping a certain number of correctly colored vitamins and combo multipliers along with power-ups are rewards for stringing together enough properly tapped vitamins. 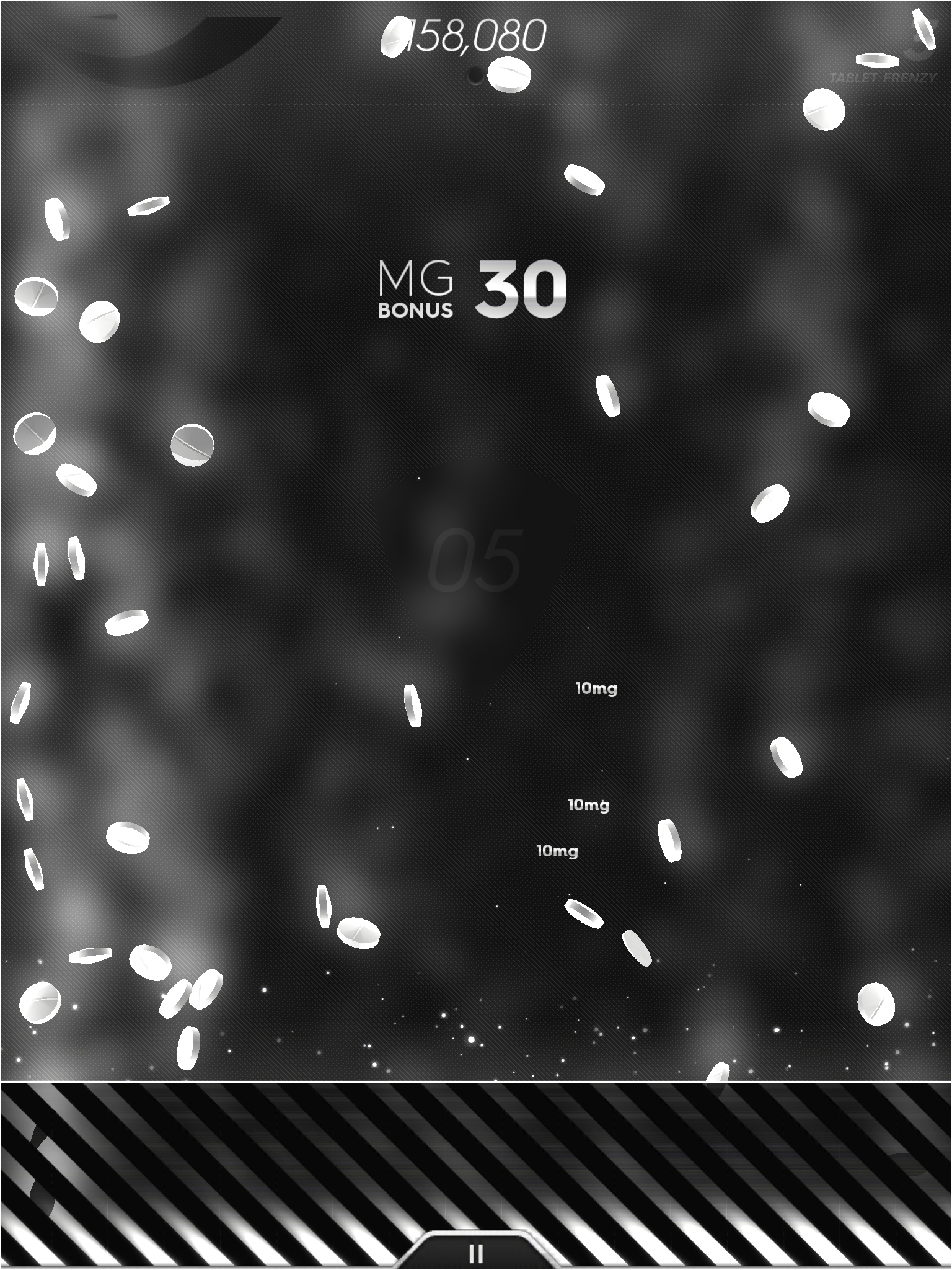 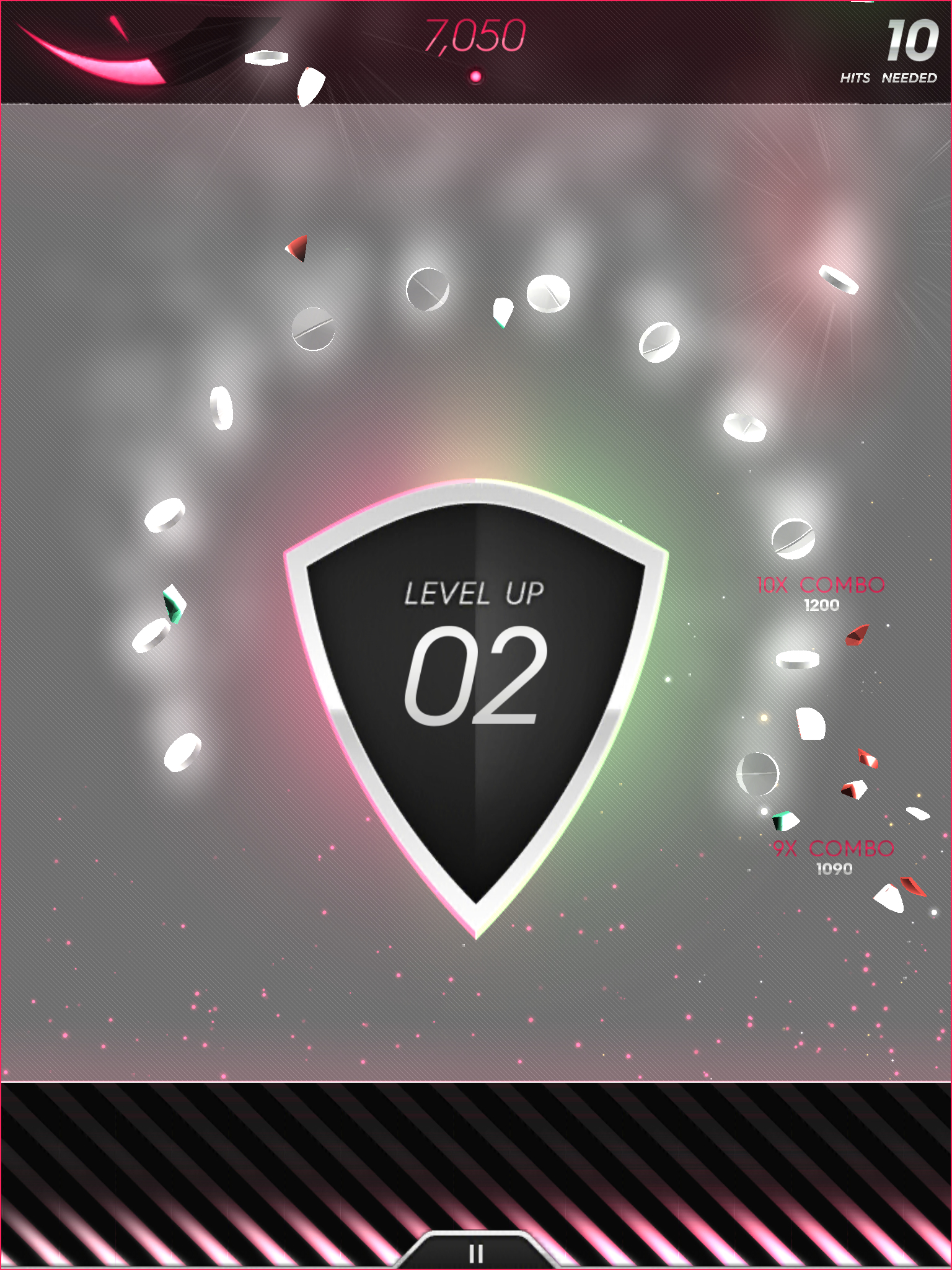 Intake ups the ante on the strategy with the inclusion of some supplemental items, such as colorless pills that break the combo when tapped. In addition, combos are lost when empty space is tapped, forcing players to make sure that their taps are well-aimed. The danger zone also acts as a shield, destroying vitamins of the same color that enter it. In addition, every few levels a special mission is launched which changes the way vitamins fall. For example, Flood dramatically increases the amount of pills on screen at the same time, while acceleration makes them fall much faster. Meanwhile, full leaderboard support, achievements, and plenty of extra modes mean there’s a lot of things to do beyond a normal playthrough.

Because of all the elements at play, a typical play through of Intake is a balancing act between getting a high score and advancing in levels. Correctly tapping vitamins and building combos is the best way to increase your score and earn power-ups, but eventually the vitamins become frenetic enough that it might be a good idea to start tapping vitamins regardless of color simply to reduce the likelihood of one slipping through your shield. Shifting shield colors during a session will make levels end faster, but will take your attention away from the immediate need to tap vitamins and prevent stray ones from ending your game. They sound like simple things to keep track of, but the gameplay gets crazy very fast which complements Intake’s style very well.

Visually, Intake reminds me of Beat Hazard but with the visuals toned down a bit. There’re tons of particle effects strewn about the black screen while you’re popping vitamins, while the individual vitamins and shields are aglow with color effects that give the gamespace a futuristic vibe. Meanwhile the dub step soundtrack is a combination of old and new tunes and is a great supplement to the rest of the game. One strange thing I noticed was an impressive amount of slow down when the screen started filling up with vitamins. Considering I’m playing Intake on an iPad Air, I was a bit surprised by how slow the framerate got in those situations. However, it never really got to the point where it impacted the gameplay too badly.

The majority of the rest of my complaints relate to the way Intake unlocks things. Standard currency is collected during runs and can be used to unlock a variety of power-ups (as well as new color schemes and music). I personally think the costs to unlock everything is way too high and drives players to purchase said currency via IAP. It’s obvious Intake is built for the long haul for hundreds (if not thousands, based on the achievements) of runs, but I still would have liked faster currency accumulation.

In some ways, Intake is a stark departure from Cipher Prime’s previous games. However, the same level of detail, visual pizazz, and approachable gameplay that serve as hallmarks for their previous games also apply to Intake: Be Aggressive. There’s a lot to love about this new interpretation on classic arcade gameplay, and the few complaints I noted don’t detract from an otherwise highly enjoyable experience. If you have an iPad, then you owe it to yourself to check out this arcade shooter.