Cipher Prime has a history of bringing out games that are beautiful, engaging and just a little light on length. Auditorium [Free] locked many of its levels behind paywalls, and originally carried a premium price. Pulse: Volume One [$3.99] started its life with only a handful of levels, and has been slowly adding more since its launch. Fractal: Make Blooms Not War [$1.99] is, like its older siblings, a beautiful, engaging experience. Unlike the others, it’s also bursting with content.

But be warned: this is not a game for the faint of heart. Cipher Prime doesn’t walk players through most of Fractal’s intricacies, and it’s easy to play yourself into a corner. The puzzles change and evolve as time goes by, and you’ll be given only the barest introduction to the new elements. This is a game that can be played wrong, and it doesn’t concern itself with guiding you back to the right track.

To begin with, you’re presented with a hex grid laid out with fractals (hexagons). You can tap any open space to push adjoining fractals away. Your goal is to push them into blooms — clusters of seven fractals — which clear themselves off the board. Each level of the game’s Campaign mode requires you to clear a certain number of fractals before you can progress. You have all the time in the world to do so, but you have a limited number of pushes, so you have to think carefully before making a move. 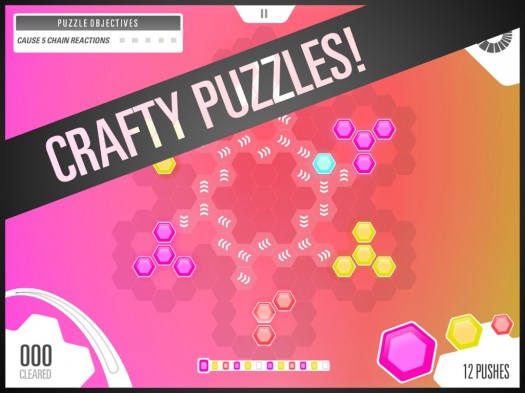 The beginning of the campaign is where most players will run into trouble. It’s easy to breeze through the first few levels to the first soft checkpoint at level 5. My first time through, I skimmed through the early levels with only a few pushes left, but that didn’t seem like a problem. I reached the checkpoint and then proceeded to throw myself fruitlessly against the next few levels over and over. The game never chided me, and I kept restarting from the checkpoint hoping for a better result.

That was, as it turns out, a huge mistake. If you pay attention, you’ll note that your pushes carry over from level to level in Fractal’s campaign. By continuing from the checkpoint I was starting with the bare minimum of pushes, and since I wasn’t yet skilled at the game I would run out by level 7 or so. Once I figured this out I started from scratch, and made it to the push-resetting checkpoint at level 10 without a problem.

That’s not to say the game gets easy after that. Fractal’s campaign is quite challenging. New elements are introduced every few levels, forcing you to adapt your strategy. Not only are you pressed to reach the next checkpoint and keep your push total high, but as you reach your last few pushes the game’s visuals dim and the music slows like a fading heartbeat. The tension is nearly unbearable.

Fractal offers two modes beyond the campaign: Arcade and Puzzle. Arcade is a fast-paced version of the game with three difficulty settings. It’s more of a survival mode — you have unlimited pushes but tight time limits, and you have to collect timer powerups to keep going. It’s good for a few minutes of mindless fun or a serious high-score push on the Game Center leaderboards. Puzzle mode strips the game’s mechanics down into 60 individual challenges. The first few serve as a good introduction to the game if you’re struggling, but the difficulty quickly ramps up. I’m still beating my head against a few of the later ones, but thankfully they’re divided into 10-level sections that are all unlocked at once, so you’ll never get stuck with just one puzzle to work through.

If you’re easily frustrated, Fractal may not be for you. But if you’re up for the challenge and you aren’t looking for your hand to be held, it’s an outstanding experience. The ambient soundtrack is gorgeous, the visuals are crisp and stylish and the game is strikingly original and fun. There are hours of mind-bending entertainment here. There’s some disagreement on our forums as to whether Fractal’s campaign is a good challenge or a frustrating experience, and there are certainly tweaks that could be made to help players along. But while the game may not invite you in, it’s all the more satisfying when it all comes together. When played well, Fractal is explosive, an experience that makes the struggle feel worthwhile.