Pulse: Volume One [$4.99] is a new iPad-exclusive game by Cipher Prime, the developers who created the award-winning Auditorium [Free]. Like Auditorium, Pulse is a simple and elegant music game. This time around, Cipher Prime has moved away from puzzles and into the rhythm game genre.

Pulse is an immersive experience right from the start. Even in the tutorial, the game provides no external feedback. You can learn by experimentation, noting what works and what doesn’t with the game’s visuals to guide you. You’re presented with a series of concentric circles and a musical beat. Glowing rings pulse outwards from the center in time with the music, and dots appear with the beat. Tap the dots as they’re hit by the pulse and you’ll be rewarded with explosive visuals and the next musical note. 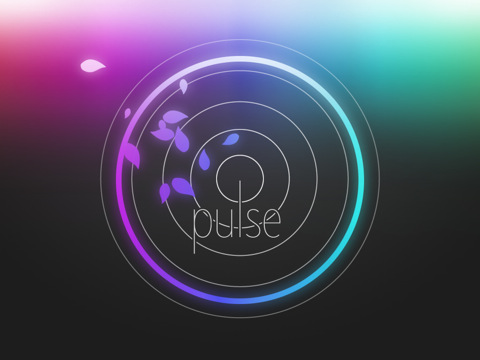 Hit them too soon or too late, and that note is marred with dissonant noise, and the color and beauty leech out of the game. Played successfully, Pulse is a visually exciting experience. Birds and butterflies fly from under your fingertips with each successful tap, and colors light up the screen. It’s a game that really shows off the elegance of the iPad’s touch interface, an impressive feat for the developer’s first time self-publishing on iOS.

Pulse includes eight levels that showcase original music composed by the Cipher Prime team. The music is atmospheric, and ranges from slow ambient tracks to upbeat electronica. As the music gets faster the game gets more difficult, and you’ll need to use both your hands and have incredibly nimble fingers to keep up with some of the later tracks. Getting 100% on each level is a challenge, but the music is enjoyable enough to stay fresh through repeat plays.

Unfortunately, eight tracks are all that the game currently has to offer. In total, a single play-through of all the tracks makes up less than twenty minutes of play time. The game doesn’t include leaderboards, achievements, or any other way to share your progress, so once you’re satisfied with your performance, you’re done. That’s not great news, but Cipher Prime has at least six months of regular free updates planned, with original music that will showcase independent musicians from Philadelphia. It’s also taking music submissions on its website. Upcoming content includes songs from an eclectic mix of genres, including chip-tune, nerdcore and death metal, so there should be plenty to look forward to if you decide to jump in now.

Ultimately, if you’re looking for strong gameplay hooks and replayability, Pulse:Volume One won’t hit those notes for you. But if you’re interested in elegant rhythm gameplay and an immersive audio-visual experience, you’ll find lots to enjoy.