A sweet new easter egg was recently discovered for the brilliantly remastered version of Sonic The Hedgehog 2 (Free) which allows you to play Hidden Palace Zone in its original, unfinished form. For some quick backstory, Hidden Palace Zone was a level originally intended to be included in the 1992 release of Sonic The Hedgehog 2, but was scrapped at the last minute as it wasn’t going to be finished by the release deadline. It was so close to being finished that assets for the level were distributed to media and featured in magazines, and a partially complete version of Hidden Palace Zone was included in a prototype version of the game. That prototype, as the story goes, was stolen from a New York toy fair in 1992 and subsequently released online, meaning that the parts of Hidden Palace Zone that existed could be experienced through various hacked roms.

However, an all new version of Hidden Palace Zone that featured a new, original boss fight was created and included in the remastered Sonic The Hedgehog 2 that was released on mobile last December, much to the delight and amazement of Sonic fans everywhere. The new Hidden Palace Zone is extremely well-crafted and fun, and feels like it could fit right in with all the original levels that were part of the 1992 release. That said, it’s still super interesting to experience the prototype version of Hidden Palace Zone, so let’s talk about how you go about doing that. 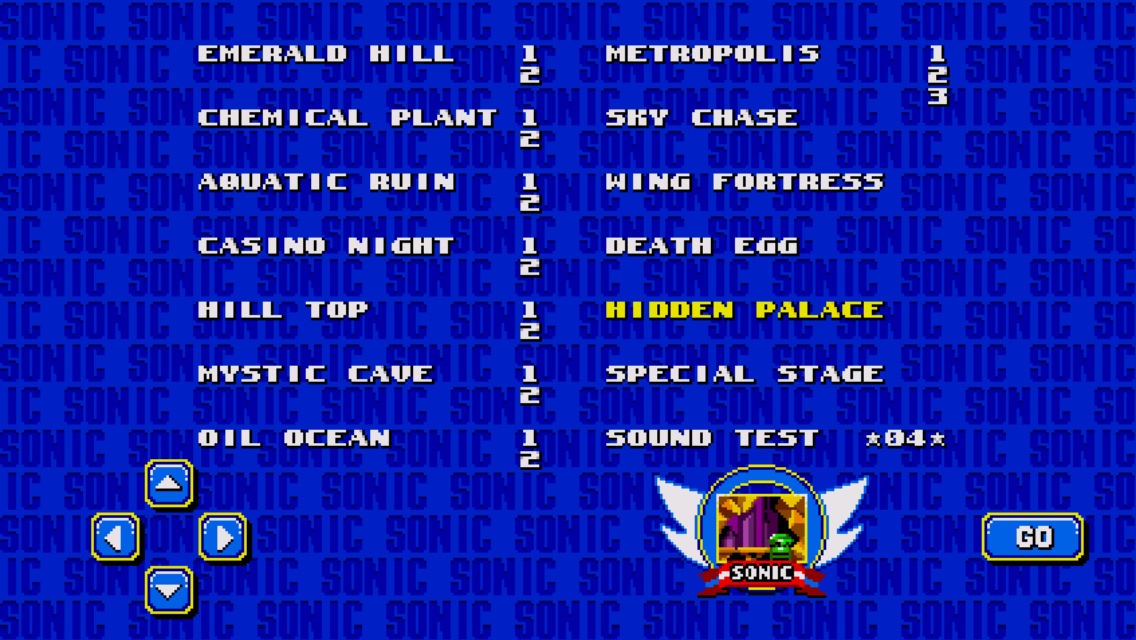 First off, you’ll need to be familiar with accessing the level select screen and activating debug mode, two things we covered in our secrets guide for the remastered version of Sonic The Hedgehog 1 (Free) and are pretty similar here. First, start a new “No Save Mode" game with any character, and when the game is starting up and the SEGA logo flashes on the screen tap the letters S-E-G-A in that order (you should hear the ring collection jingle). Then hold both thumbs on the screen and keep them held down. The title screen should show briefly and then you’ll be booted right into the level select/sound test screen. Arrow up to the sound test and play these tracks in order: 01,09,09,02,01,01,02,04. You should hear a ring chime. Then play these tracks: 03,03,03,0B,10,10,10,04. Again you should hear a ring chime. Then, simply arrow up to the Hidden Palace Zone option in the menu and press play.

The prototype Hidden Palace Zone is appropriately named Proto Palace Zone, and Sonic Retro forum member You Are Pwned originally discovered its existence by using a special developer menu on PC. A subsequent post on Sonic Retro from Christian “The Taxman" Whitehead, creator of the remastered ports of Sonic, confirmed that the prototype level could be accessed much more easily via the sound test code above. Here is a video from You Are Pwned showing off Proto Palace Zone.

As you can see, since the level is unfinished there’s a large gem plugging up a pipe where the level ends which will transport you back to the level select screen so you don’t get stuck. In addition, there’s a few spots where you can fall into death pits in Proto Palace Zone and should that happen you’ll simply die and restart in the regular Taxman version of Hidden Palace Zone. Playing the prototype version after that requires quitting out to the level select menu and inputting the code again. All in all, a really cool easter egg for Sonic The Hedgehog 2, especially if you’re aware of the lore behind Hidden Palace Zone but never had the chance to play it in any form before.

In a related bit of “Lost Sonic Levels" news, sonicblur over at Sonic Retro discovered the existence of two more lost levels, this time from Sonic CD, that similarly never saw the light of day. In this case, the two levels, Desert Dazzle and Final Fever, were original creations by Christian Whitehead which were planned for the 2011 remastering of Sonic CD (Free), but were scrapped. Interestingly, these levels were not in versions of Sonic CD prior to its most recent February update, leading some to speculate that Taxman is finally finishing off these levels for inclusion in the game sometime down the line. That seems a bit farfetched to me, but at the same time the way Sega allowed for Hidden Palace Zone to be resurrected tells me that just about anything is possible. You Are Pwned loaded the Desert Dazzle files into a Palmtree Panic level in the PC version of Sonic CD just to get a rough idea of what it might be like, and you can check out his video of that below if you’re curious.

We’ll keep an eye out for any news involving additional secrets, new levels, easter eggs or any other bits of cool stuff in the world of the remastered Sonic games. My fingers are firmly crossed that The Taxman is going full bore on a remastered version of Sonic 3 & Knuckles. Also, special thanks to TouchArcade and Sonic Retro community member cobbyco for emailing a heads up about this latest easter egg, and be sure to check out his thread in our forums which encompasses all the major secrets involving the remastered Sonic The Hedgehog games.