Once in a blue moon, an inconspicuous game will come around and turn an entire genre or platform on its head. Sometimes You Die ($1.99) is one of those games. On the surface, Sometimes You Die is a very standard, but sleek platformer that asks you to get a cube through a series of hard-hitting arenas, with razor sharp spikes and enemies that usually employ the same said sharp tactics. You’ll be able to traverse these areas by way of moving left, right, and jumping — that’s all you’ll really need.

But there’s a pretty big catch — every time you die, you spawn a new cube where the last one fell. This is the key ingredient to a lot of puzzle solutions, which will have you create mounds of dead bodies to climb over, or pierce yourself on certain portions of the wall to create a makeshift ladder. It’s very simple yet effective, and if you’re ever frustrated or stuck, just hit the “restart" button to reset the entire board. 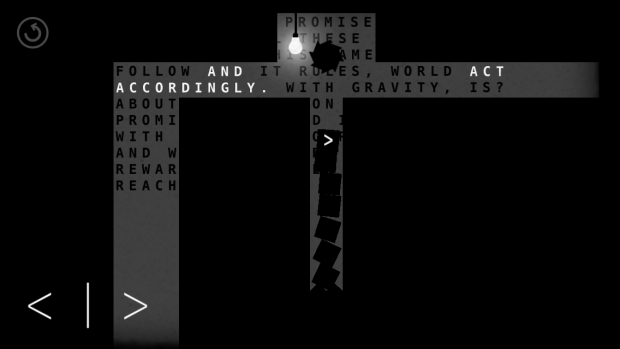 It’s a mechanic that’s hardly frustrating, and will make you approach basic puzzles in a completely new way. It helps that many puzzles can be cleared in multiple ways, which really opens up your brain. Sometimes You Die also has a major underlying theme in that it’s part art game, scrawling different bits of haunting and helping dialog on the wall behind you — with the lights illuminating the important parts. It’s not uncommon to want to stop and read the messages, and the way they are presented is incredibly unique.

While it looks like a normal platformer by way of a static screenshot, Sometimes is actually a bit more fluid in motion. Lights will swing, physics come into play, and everything just feels generally alive. The same goes for the soundtrack, which suits the mood of the game perfectly.

I don’t want to spoil anything, but the game ends up mocking IAP, the state of the market, and the platforming genre in general by the time it’s done. It also has a few mind-bending twists that really set it apart from the rest. It’ll take roughly 30 minutes to get to that point, but the journey is worth every bit of the squeeze. Okay, so it’s not really a spoiler, but Sometimes completely lacks any form of IAP — what you buy is what you get.

It’s hard to really talk at length about Sometimes You Die without giving it away entirely, but it’s not only worth playing, it’s worth finishing. With a core mechanic as simple as climbing over the fallen bodies of your past incarnations, Sometimes is fun, unique, and memorable.