The iOS platform is one of the best platforms for shoot-em-ups of all time. Yes, I’m going there. In previous reviews of shoot-em-ups I’ve written here, I may have come off a bit harsh, but that’s the reason for it. This is a platform where we have excellent versions of classic shooters like Raiden Legacy ($4.99), Blazing Star ($0.99), the R-Type ($1.99) games, and Cave’s finest arcade games. We have ports of modern games like Sine Mora ($4.99) and Dariusburst ($8.99), and even a good selection of original titles like Space Invaders Infinity Gene ($4.99), Phoenix HD (Free), Danmaku Unlimited 2 ($4.99), and Dodonpachi Maximum ($3.99). That’s the cream of the crop, but there are plenty of other excellent shooters available for your mobile device. All of these are available for some of the lowest prices we’ve ever enjoyed shoot-em-ups at. Simply put, this is a buyer’s market of epic proportions, and when you can plunk down a few bucks to get R-Type 2 ($1.99) or drop a ten-spot and change to get a Cave shooter, it becomes a lot harder to justify spending time or money on the mediocre. 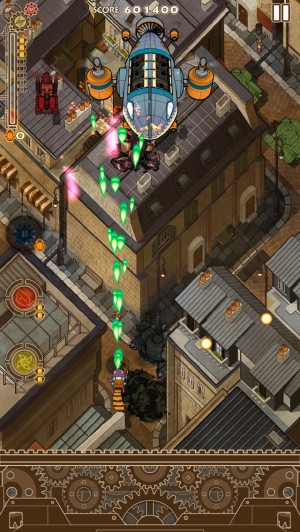 That said, I think we’ve got another game to add to the list of the good guys. Angerforce – Strikers ($3.99) might initially give off some funky vibes due to the garbled description in the App Store, and I certainly wouldn’t blame anyone for being hesitant upon seeing that the game has a consumable currency used for continues and power-ups. These things scream cheap, quick cash-in, something adventurous fans of the genre have likely stumbled on quite frequently in their iOS experiences. Imagine my shock to find that Angerforce is one of the better original shooters to come along in a while. Go on, imagine it. Wait, you really think I’d make that face? Well, okay.

There have been plenty of attempts to emulate the bullet hell style that Cave has essentially turned into its calling card. While there have been a few successes, such as the aforementioned Danmaku Unlimited, the path is littered with the broken shells of failed efforts. It’s not just about throwing out a ton of bullets. There are a lot of little details that make Cave shooters what they are, including the impact of shots, enemy patterns and combinations, deadly bosses, interesting weapons, great scoring systems, and unique settings and characters. Angerforce doesn’t do all of those things quite as well as Cave’s games, but it makes a stronger all-around effort than most.

You can choose from four different characters, each with their own special abilities and attacks. Initially, only one of these was unlocked, with the others being IAP, but the game was updated so that all of the characters are open right from the get-go. Each character has different stats, as well as two unique special moves and a unique bomb attack. For example, Asimo, the robot, is quite big and slow, but he collects energy more quickly than other characters, enabling him to fire off his special attacks more frequently, while Echo, the game’s female character, has heavy-hitting special attacks while being very weak defensively. After selecting a character, you are treated to a nice pencil-sketched cut-scene that gives you a bit of context, and you’re off. 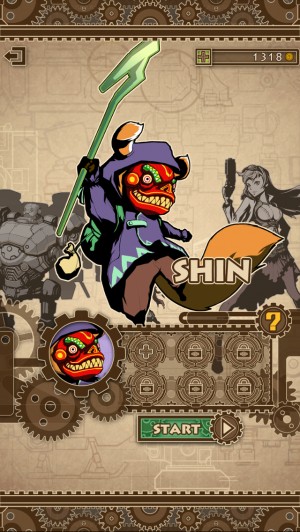 There are three modes of play. Arcade mode sends you on a journey through the game’s six stages. You can use power-ups and continues in this mode if you like, and enemies will drop coins that can be used for both. Continues get more expensive each time, so unless you feel like grinding out coins or buying some IAP, you’ll have to learn to play well if you want to see the whole game. If you do manage to clear all the stages, you’ll find a Cave-style second lap waiting for you where the difficulty is cranked up to insane levels. Expert mode sends you through the same stages, with one key difference: no coins, no continues, no power-ups. Finally, Mission mode allows you to choose the stage you’d like to play from the ones you’ve beaten in other modes. You can use power-ups here, but the enemies don’t drop coins and there are no continues.

The power-ups are just single-use boosts for each play. I find the game is generous enough with coins that if you don’t go hog-wild on boosts or continue too many times, you’ll probably break even. If you bring the coin magnet power-up, you’ll probably turn a profit. I think the game would probably be better off giving you a continue or two for free each game, but at the same time, I appreciate that you can’t just continue your way through the whole game without consequences. You really do have to learn it, which is where most of the fun of these games comes in.

The gameplay itself is solid. Your hitbox is suitably small, which is good because Angerforce isn’t shy with the bullets. Your weapons are quite effective, and your special abilities are powerful. Beating enemies builds up energy that refills your special attack meter, so you get to use your abilities fairly frequently. As in Cave’s games, you can activate your bombs at your leisure, or you can leave them untouched to act as life-savers when you take an otherwise fatal hit. The stages aren’t overly long, but they’re satisfying enough, with fun enemy patterns and robust, challenging bosses. The scoring system uses a fairly straightforward combo approach, requiring you to constantly take out enemies in rapid succession to build up a high score.

It’s clear the developers have done their homework with the controls. Movement uses relative touch, with a small portion of the screen sectioned off so that you don’t have to block the play area if you don’t want to. Your ship auto-fires its main weapon, and you can access your special attacks and bombs via buttons on the side of the screen. You can even choose which side you’d like the buttons on in the options, so it’s lefty-friendly. Better still, since it can be awkward to hit buttons in the middle of a tense firefight, you can also access your special attacks by using a two-finger touch or a double-tap, depending on which one you’d like to use. It’s very intuitive, except for the fact that you still have to tap a button if you want to let loose a bomb.

In terms of presentation, Angerforce is a winner. I’ve seen plenty of games do a great job of emulating the sci-fi elements of Cave’s games, but not many do a good job of capturing the more fantasy anime aspects. They end up looking cheap or visually inconsistent, or they have awkward animation. This game looks excellent. It moves smoothly, explosions look nice, and everything just looks like it fits together. The stages are beautiful backdrops that manage to look interesting without being distracting. As you work your way through a level, you actually feel like you’re going somewhere rather than just endlessly covering the same stretch of ground, Hanna-Barbera style. Enemy designs are cool and well-animated, and, importantly, their bullets stand out well against the backgrounds. The cut-scenes look great, even as rough as they are. 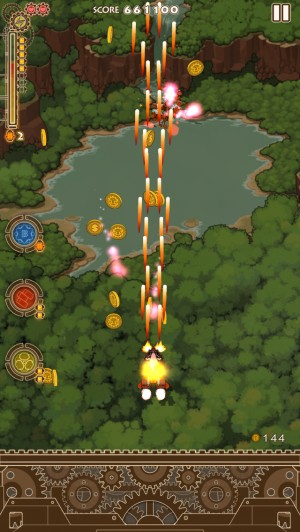 There’s a lot of music in the game, though it’s a bit of a mixed bag. I really enjoyed some of the tunes while others were easily forgettable. The sound effects follow this pattern, with explosions having a nice weight to them while the actual firing of your weapons is strangely muted. It’s a decent enough job, and again, better than many that try this sort of thing, but if there’s one area where this game needs a little extra love, it’s in the sound effects. It might seem like a superficial element, but shoot-em-ups derive most of their entertainment from the player feeling like an awesome destructive force, and sound goes a long way towards delivering that. Apart from that, my only other criticisms of the presentation is that the translation is quite rough and there are no achievements. Pleasantly, the game does have support for a variety of Game Center leaderboards, so you can compete for scores with other players.

Angerforce – Strikers isn’t quite as high-quality as the Cave games it clearly homages, but it does get awfully close, and taking the price into account, that’s a pretty good deal. It doesn’t have the bells and whistles that some of Cave’s ports have, and the scoring system lacks creativity, but the core game itself is a great bit of fun. It’s especially impressive since this seems to be the developer’s first stab at a shoot-em-up. If this is their starting point, I’m genuinely excited to see how far they can go in the future. It’s not a problem-free experience, and the continue system is going to make the game largely inaccessible for the average player, but for shoot-em-up fans who are feeling the recent sparsity of quality efforts in this particular style, Angerforce is definitely a game worth checking out.