In my younger years, I would often look through the ads in the back of games magazines, goggle-eyed at all the niche import games and weird pieces of hardware that, living in a very small town, I would never, ever have a chance to find in a local store. Ads were a liittle different back then, which was likely a result of the primitive nature of game graphics, and they had a tendency to, shall we say, oversell the concept in slightly misleading ways. If you had an active imagination, it was all too easy to read one of these ads and conjure up something in your mind that was far more entertaining than the reality. I’m sure we can all rifle off a variety of examples, but for me, one of the worst was the Barcode Battler.

This was a little handheld device that seemed to promise limitless entertainment. The idea was that you could scan in any barcode, and it would create a hero, weapon, or item. After scanning in a few codes, you could then set these warriors against each other in battle to see who would come out on top. Collect barcodes! Create your own heroes! It even came with some cards with pictures of various characters on them. 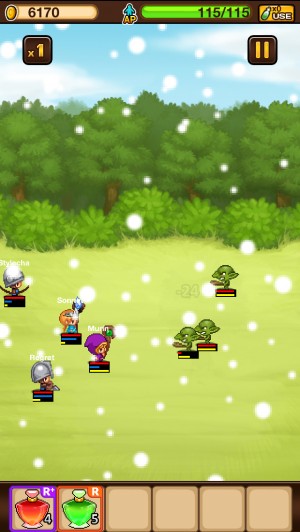 Suddenly, a trip to the grocery store with mom would become an exciting adventure to find the ultimate fighter. What kind of hero would come from a box of Corn Pops? Would my action figures make for powerful virtual battlers? The visions I had in my head from this concept were quite lofty. I was so enamored with the notion that I paid little heed to the fact that the screen of the device in the ad only showed numbers. After all, I was well-versed in RPGs by then, so I assumed that was just one type of display, a stats screen, perhaps.

Well, as far as I know, my parents made a solid go of trying to find one of these things, but it just never happened, and in hindsight, that was for the best. It turns out the Barcode Battler was a pretty big deal in Japan at one time, so I’ve had the chance, as an adult, to finally lay hands on that dream handheld. If I had received this as a coveted Christmas present back in the day, I probably would have been crushed. It really is just numbers versus numbers, and you have very little input on the battles themselves. I still, to this day, think the concept is a good one, though. Anyone who got into Monster Rancher on the PlayStation knows what I’m talking about. There’s just something cool about the idea that a super-powerful, rare unit can be found just laying around your home for you, and only you, to find and utilize. It just needs to be fleshed out a lot more than it was on that simple device.

It’s in those footsteps that Barcode Kingdom ($0.99) follows. The basic premise is the same: scan in barcodes to create warriors, weapons, and items that you can use in RPG-style battles. Naturally, since we’re not playing on a cheap device from 1992 anymore, we get a graphical representation of everything. On top of that obvious advance, you aren’t limited to single one-on-one battles, either. Instead, you make a party of warriors and march out on various missions, most of which involve fighting a group of monsters. You also have a castle that you must defend and level up to open up new areas. As you clear missions, you’ll unlock new missions and earn experience points and gold, which can be used to level up your characters, gear, and characters. The game even has a multiplayer mode that allows you to attack another player’s castle to try to steal away some gold, though they can also do the same to you. 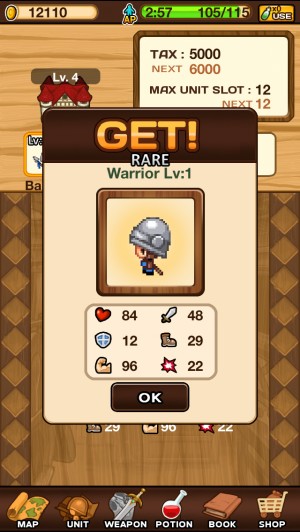 There’s no proper story to speak of, as near as I can tell. Missions have different names but still shake out to the same thing, more or less. You’re going somewhere, killing some monsters, getting the spoils, and upgrading your stuff. The more you play, the more expensive those upgrades get, and you’ll surely hit a point where your characters will have enough experience to level up, but you won’t have the gold to do so. Resources get very tight very quickly, making the game feel like a real squeeze in the long run. Initially, things are cheap enough and rewards are plentiful enough that you’ll really only feel the chafing from game’s stamina system, referred to here as AP.

AP is required to do many things, most notably to scan barcodes. The other main way to use AP is to kill the travel timers for your questing parties. When you send a party out, depending on how far from the castle their destination is, a real-time timer will be set to account for travel time. Even nearby places take a couple of minutes, with farther places taking a lot longer. If you actually want to play, you’ll probably have the urge to jog those timers along using your AP, which is great until it runs out. At that point, you have to wait for it to recharge if you need it again. It recovers at kind of an agonizingly slow rate, so if you do manage to extinguish your supply, you’re better off just closing the game and coming back a while later.

Of course, if you really want to keep playing, you can just refill your AP using one of the game’s three handy currencies. Yes, this game has three currencies, and for all intents and purposes, two of them are premium. Gold is earned pretty regularly through normal play, though as I mentioned earlier, after you get a ways into the game, the amount you earn is far out of proportion to your needs. You can also buy it with real money in the shop. Stone is used for upgrading weapons, and is extremely hard to come by through normal means. The easiest way to get ahold of it is to use the game’s shop to trade AP potions for it, which are the third currency. AP potions can be used to refill your AP meter or traded for stone. You can buy AP potions in the game’s shop for real money. 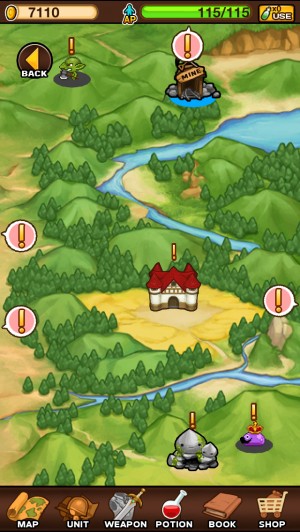 So, yes, this game is pretty much packed to the gills with all the worst kinds of monetization. It makes a great first impression because, let’s face it, scanning up every barcode in the immediate vicinity to see the results is a pretty fun thing to do. Your guys are more than strong enough to get by in the early going, and you’ll have enough gold to furnish your needs for a while. The stamina meter is annoying but after your initial rush of scanning things, it actually goes a fairly long way. The more you play, though, the more the game starts to squeeze, until you’re left with something that’s only marginally less annoying and pointless than Final Fantasy: All The Bravest (Free).

Playing deeper into the game also makes its limitations far more apparent. There are only a few types of units, a few types of monsters, and a few types of weapons and items. Sure, the stats vary depending on what you’ve scanned, but you’ll quickly run out of new visual stimuli. What’s here is nice enough, though nothing spectacular by any means. There are cute little characters carrying out animations and making exclamations through tiny word bubbles as they explode their enemies, colorful backgrounds, and even some half-hearted attempts at throwing in weather effects. The music is nice, if a little repetitive, which isn’t a big problem since you won’t ever be playing for very long at a time.

Chalk this one up as a great gimmick with decent execution where the fun ends up almost totally spoiled due to monetizing virtually every aspect of the game. You might get some enjoyment out of Barcode Kingdom if you treat it as something you take out and play for a few minutes when you’re on coffee break, but even then, you’re going to hit a point where progress gets so slow that it’s no longer satisfying. Once the initial buzz of scouring your pantry for super rares wears off, there’s not much left to Barcode Kingdom, and it does a great job in the long run of squashing even that. I’ll grant that it’s cheaper and more satisfying than a Barcode Battler and the novelty alone might be worth a buck, but there are countless free apps that will let you enjoy that same thrill and probably give you the same amount of enjoyment in the long run.