Captain America is one of those Avengers that used to have a support role, but lately he has become a headliner thanks to his original movie getting a recently released sequel. That might not be a perfect spot for this rather stiff character that has to rely on his personal history to become interesting, and relevant. Compared to the Hulk, or Wolverine who are characters with an ongoing internal struggle.

Ol’ Captain America needs other characters to bounce dry remarks with, and at times he feels lonely without another hero by his side. His powers are also a bit too straightforward to build upon. In Captain America: The Winter Soldier – The Official Game (Free) this is remedied by giving him two optional agents. These are upgradeable support soldiers who have special abilities such as blowing up barrels or lowering enemy defense. Most of the time they act on their own using ranged weapons to help Cap clear out enemies. 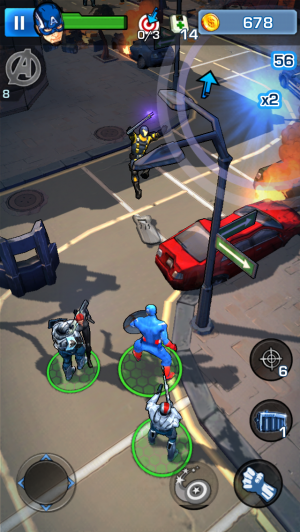 Cap can throw his shield at enemies according to how you draw a path for it. This is actually the thing I found the most rewarding in the entire game. First throwing the shield at some enemies to draw their attention, and then activate a trap when they come near. Fisticuffs, and kicks are used when enemies are close enough. With only one attack button this is all about button mashing though, as Cap randomize his attacks on his own.

The controls can be set to either use a virtual stick for movement, or tap on location to go there. There is a third option that combine these, but I found it to be pretty bad. Too often I tapped the attack button, but got movement instead. Personally I preferred the virtual stick, as it makes the game feel more like an action brawler in the vein of Double Dragon.

All levels have three challenges that you complete to earn stars, and you can always replay earlier levels to ace them. To complete a level you have to rescue civilians, kill all enemies or destroy certain objects. Generally gameplay is about moving your trio between groups of enemies attacking you. It is all highly linear, and it is a shame as this could have been made into a random dungeon crawler experience instead or something else that feels less same-y.

Gameloft has created quite a few movie tie-ins, and if you have played one you know what to expect. Stellar production values, and as much use of the IP as possible. What sets this game apart from the others are the excellent cel-shaded graphics, and retro use of visual cues for sound effects. It suits the old-school character Captain America perfectly. And another thing that makes this game quite unique is the orientation it is played in: portrait. To some this might feel awkward, and you can´t play the game effectively with one hand. To me it is a breath of fresh air, and enhances the imagined size of the levels.

One thing that bothers me is the heavy-handed use of IAP, and numerous currencies used. Everything about the menus could be taken straight from a freemium game. Timed challenges, bonus wheels to spin and upgrades using both gold and other currencies. If you fail a level you get the option to revive agents, and the Cap at a cost. If you don’t the upgrades to your agents are lost. Additionally, it requires a constant internet connection to play.

Captain America: The Winter Soldier is a product that gives you a quite shallow city brawler game where more focus has gone into presentation, and freemium mechanics than providing a great time for the player. Sure you can play for as much as you want without timers, or lack of in-game energy, but after a while you will feel that you are just moving closer to the point where the game will demand more money from you to stand a fair chance. Where someone like Tony Stark wouldn’t mind, the Captain would. Oh yes he would.