One of my fondest memories back in elementary school was learning all about Greek mythology and greek gods. I also am a bit of a Percy Jackson fan, but that probably makes me more of a dork than anything else. When I first noticed Mount Olympus ($1.99) I couldn’t resist downloading it and seeing what this intriguing point and click adventure had to offer.

As a hero sent on a quest to Mount Olympus, you’re tasked with solving the mystery of the missing Gods. Your job is to search through the abandoned ancient city looking for clues that might solve this unexplained enigma, and solving a series of puzzles along the way in order to progress. Perhaps there’s more going on here than meets the eye? With every puzzle you solve, and each gate you pass through, you’ll be one step closer to unravelling the mystery that lays before you.

The creators of Tesla’s Electric Mist ($1.99) took into account all the elements that fans felt were missing from the previous game, and after a period of time back at the drawing board, they’ve certainly managed to deliver on all accounts. A longer gaming experience than Tesla’s Electric Mist, and ten times the amount of puzzles, Mount Olympus is certainly a step-up in favor of honoring their fans requests. 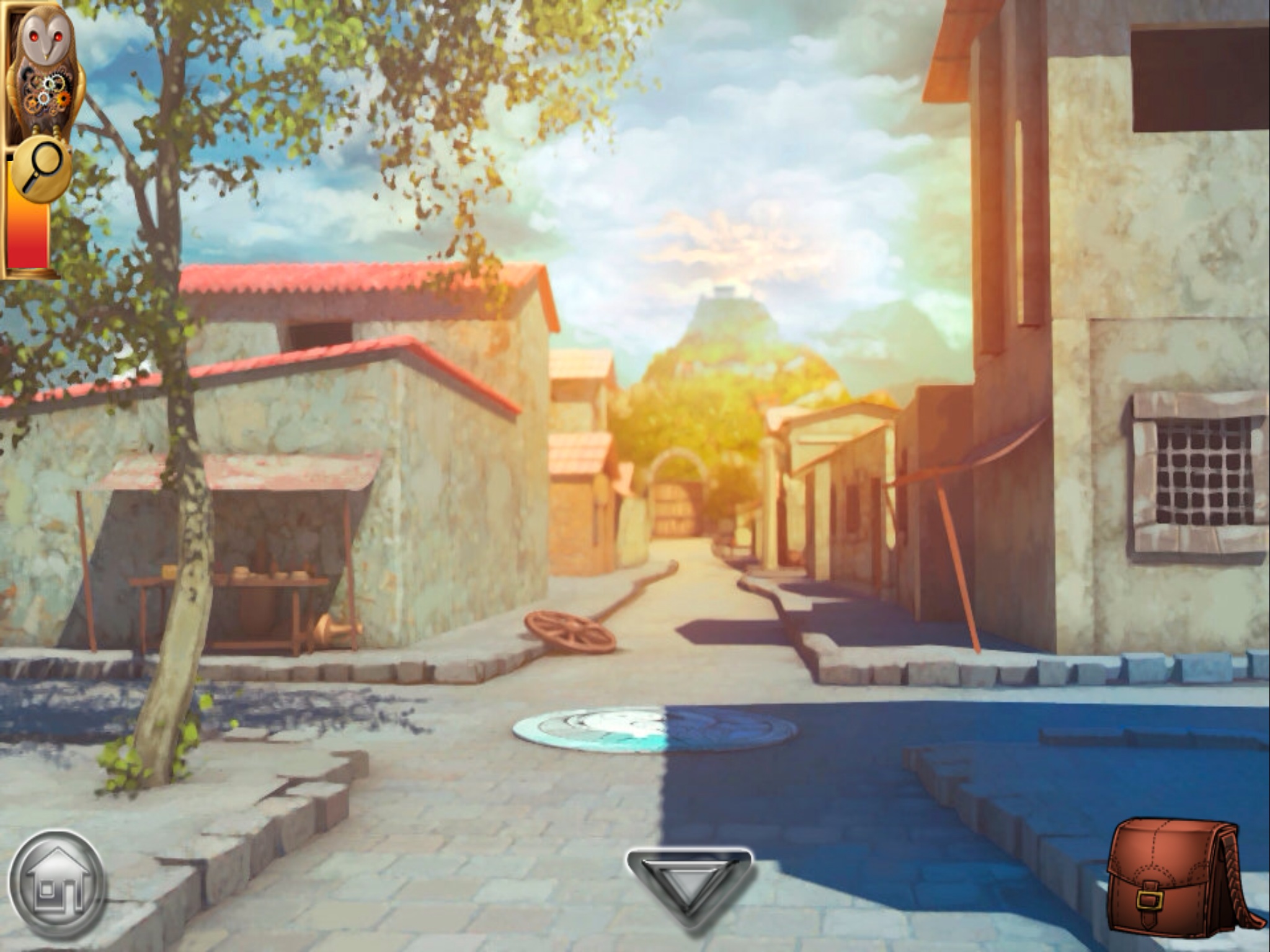 Whether you’re someone who ploughs through puzzles effortlessly or enjoys a bit of a challenge, there’s something here for everyone. If you find all the to-ing and fro-ing to search for various items a nuisance, you’ll be relieved to know that the area you’re working with isn’t so large that it’ll send you on a wild goose chase; at the same time being just the right size to keep you busy. Most of the puzzle designs are in fact fairly easy to work through, and the advantage of the integrated in-game hint feature is a nice comfort to fall back on should you so desire.

Though the game is indeed a fairly lengthy experience, the variety of puzzles and high level of exploration in each segment of the story keeps things fresh, and I found myself lost playing for hours at a time due to my determination to solve further puzzles and unlock the mystery.

The manner in which you clear each level may follow similar mechanics, but all throughout the game, no two puzzles are alike. Similarly, the locations you’ll visit will always have a handful of interesting areas to explore, the setting of the game held together well by its fascinating surroundings and each scene brimming with a handful of exotic looking curios. Usually along the lines of collecting various objects in order to use them in future scenarios, there are also a handful of other original challenges that involve tile swapping, deciphering the greek alphabet, mixing concoctions, and symbol matching, among others. There’s no end to the high level of thought and creativity that have gone into making each puzzle interesting and dynamic. If you get stuck, it’s easy to just wave the magic wand and use the wise old owl to solve the puzzle for you, but knowing that the option was there made me in particular further determined to crack them all without the additional help.

Accompanied by some beautifully elegant hand drawn artwork in every scene, (and there are almost 300 of them here, so you can imagine the degree of work that’s gone into perfecting each one), and a fantastically powerful soundtrack that emphasizes the experience greatly, Mount Olympus is unquestionably a glorious representation of greek mythology done well.

The map system is a little strange, and I’ll admit I never really used it because getting lost was rarely an occurrence, but it’s a feature some might be grateful for if the occasion arises.

With hundreds of fantastic puzzles, some classically tasteful visuals and a fantastic soundtrack to boot, you can’t go wrong with iCOOLgeeks’ Mount Olympus. If ever there was a time to learn about the mythology surrounding the ancient Greek gods, that time is now.