I have reviewed almost a thousand games for iOS since I got into mobile gaming, and there is one thing I truly hate: slow tutorial levels. Most of us understand how a game works, and just need a splash screen or two showing the controls. When Lost Light started with what seemed like an endless stream of slow tutorial levels I almost lost my cool. I get it you darn cute squirrel! I make numbered areas with my finger by connecting blocks, it is not that hard. But still the cute animals keep pestering me with match this, and match that.

And once I am past the tutorial levels the game throws twenty or so levels that can be beat blindfolded, and my frustration turns to boredom. Sure I make some mistakes, as the controls aren’t perfect on a tiny screen, but still the game fails to make me care. A couple of more levels, and I am just about done getting ready to delete the game from my memory completely. That is when it happens: wham shablam. I fail the level due to not actually getting the matches done in time. I put it off as a fluke, or sign that my fingers have gone numb from not being challenged. I hit retry, and get the same result with a game over screen in my face. With a bit more focus I squeeze by that level just to find that the next is just as challenging. 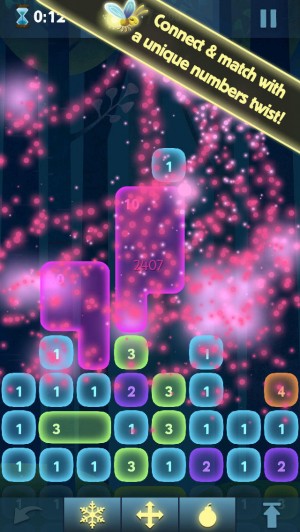 No matter if the game wants me to match a number of threes, survive for a set time or reach a set score I can’t breeze by any more. The game opens up into a quite challenging puzzler, and my fun levels go up immediately. And since it isn’t a freemium game I know I am supposed to be able to complete the levels without resorting to calling my Facebook friends for help, or my wallet for that matter.

Perhaps I should mention the gameplay, as this is a game review after all. Numbered blocks fill the lower half of the screen, and slowly slide upwards. If they reach the top the game is over. To remove blocks you create matches of two, or above. The number on the block determines the number of blocks required to create a match. If you have a four you have to create three more fours to remove them. Level objectives may vary, but the game play is always the same. In some cases you have to reach a set score within the time limit. It is really easy to get greedy, and start trying to create matches of six or above. This is a quite hard route to take, but if you succeed the risk is paying off big-time. It is generally much easier to create a long string of threes instead.

The controls aren’t perfect, as it is extremely easy to make too big blocks. This is due to the direct controls used where your finger covers up the screen you need to see. Thankfully an undo button can remedy some of this, but it doesn’t give you back the time spent making mistakes. On times survival levels I have had a tendency to yell at the game for this reason. To me that is a testament of a game being quite good though, as I care about the outcome of my actions.

Lost Light might look cute, and come with a truly tranquil soundtrack, but don’t let it fool you. Beyond the slow tutorial there is a really captivating action puzzler that almost rivals Tetris in the number of expletives coming from me when I make mistakes.