It’s new iOS game release time, and get your iTunes login pressin’ finger ready because there’s quite a lot of new games tonight, as well as a few that came out earlier in the week and this past weekend. You have classic PC game Little Big Adventure, Supercell’s latest Boom Beach, the quirky barcode scanning game Barcode Kingdom, the all-in-one digital puzzle solution Ravensburger Puzzle, and a lot more. Basically, a little something for everyone. Eli streamed many of these on our Twitch channel earlier today, and those clips have been embedded below for your viewing pleasure.

Are you the best worst student driver? Can you earn your license?

Drive your car as far as you can down the road, avoiding the traffic cones and the curb as you veer to the right, then to the left, and back again. Does your car badly need a front-end alignment, or are you just that bad of a driver? We’re not sure, but the results are hilarious!

Scan barcodes, Get unique units and items! Build your own kingdom.

Storm the beach and win the day! Boom Beach is a combat strategy game where you fight an epic war against the evil Blackguard. Take your expeditionary force to beautiful paradise islands invaded by the enemy. Fight for every beachhead, free enslaved islanders and explore the uncharted archipelago. The fight becomes a race to harness the ancient powers hidden on the islands. Are you ready for the BOOM?

Choose from hundreds of unique fighters to battle your way to greatness in Chaos Fighters. Deep customization mechanics allow for endless combinations of fighters, skills, equipment, and pets.

CLARC combines complex spatial puzzles with arcade style action elements.
As the story unfolds, the nerdy janitor robot Clarc will encounter partying robots, attractive nuclear missiles and intoxicated supercomputers. He sets out to repair his production facility on Mars and fights to rescue his friends from the intruding spaceship M.O.T.H.E.R. who threatens to disarm the factory.

CLARC’s grid-based gameplay, challenging puzzles and tight controls will give you the retro feel of your first console. 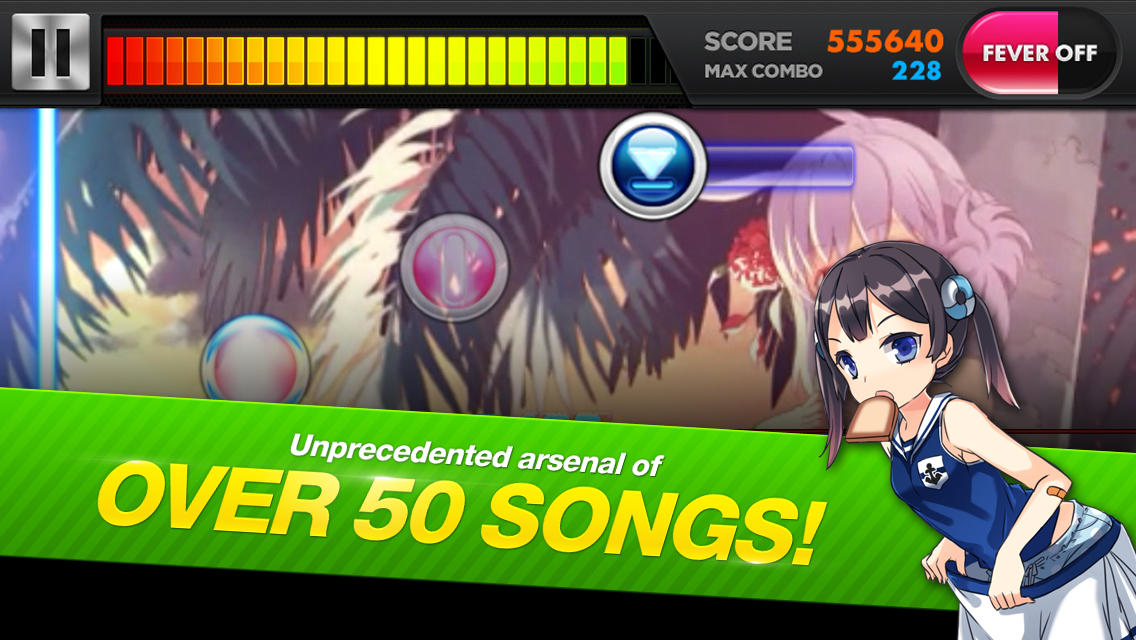 Get your groove on in the latest addition to the DJMAX series. The HIT arcade and console rhythm action game, TECHNIKA, has now arrived on mobile devices! In this edition, you can enjoy not only the songs from the DJMAX series but also play exclusive songs featured only in TECHNIKA!

Dungeon Marauders is a Dungeon Delving Digital Card Game that allows you to build your dungeon from the ground up and delve into the worlds created by other users. Capture Monsters in The Wilds to customize your creation, then build your deck by earning gear and experience to shore up your hero’s arsenal and skill set.

Dive into the fantastic world of floating islands and help young Firework Apprentice get to the Emperor’s Palace for the annual firework contest. Solve puzzles, help encountered characters, run for your life, collect Moon Powder, interact with environment, upgrade you fireworks and many more! And all this with the fireworks!

Firework Apprentice is a 3D adventure puzzle game set in fantastic world of floating islands with destructible environment. Each island has new, unique challenge for Apprentice, that can be accomplished using his fireworks (there are no repetitive stages). But in order to build his rockets, Apprentice must collect “Moon Powder" – a secret ingredient of all his fireworks!

Flap your way to the hole with this unique spin on our famous golf game! Using the now famous “flap" mechanic you must get to the hole in the fewest flaps as possible.

Featuring the courses from Super Stickman Golf 2®, Flappy Golf is a fun little project we put together for the Flappy Jam game jam. Can you get gold stars on all the holes?

FLASHOUT 2, the sequel to the highly-acclaimed anti-gravity racer FLASHOUT 3D is finally here! Get into one of many ultra-fast ships and use your arsenal of rockets, guns, bonuses and upgrades to fight your way to victory!

FLASHOUT 2 offers a fresh and addicting racing experience featuring a redesigned and enhanced Career Mode with story elements, massive improvements in matter of steering, physics, opponent’s AI, and other gameplay elements, an Online Multiplayer Mode and introduces completely new and exciting game modes, such as Destruction, Elimination and Versus!

FLASHOUT 2 also features high-end console-quality graphics, some of the best and most accessible controls to allow you to focus on pure action, amazing licensed electronic music and game controllers support! Additionally the game offers a unique interactive equalizer, that analyzes in-game music and accordingly determines, in real-time, what the visual effects look like!

Flip tiles and match colors to move your way through more than 125 challenging levels in this beautiful, minimalist puzzle game. 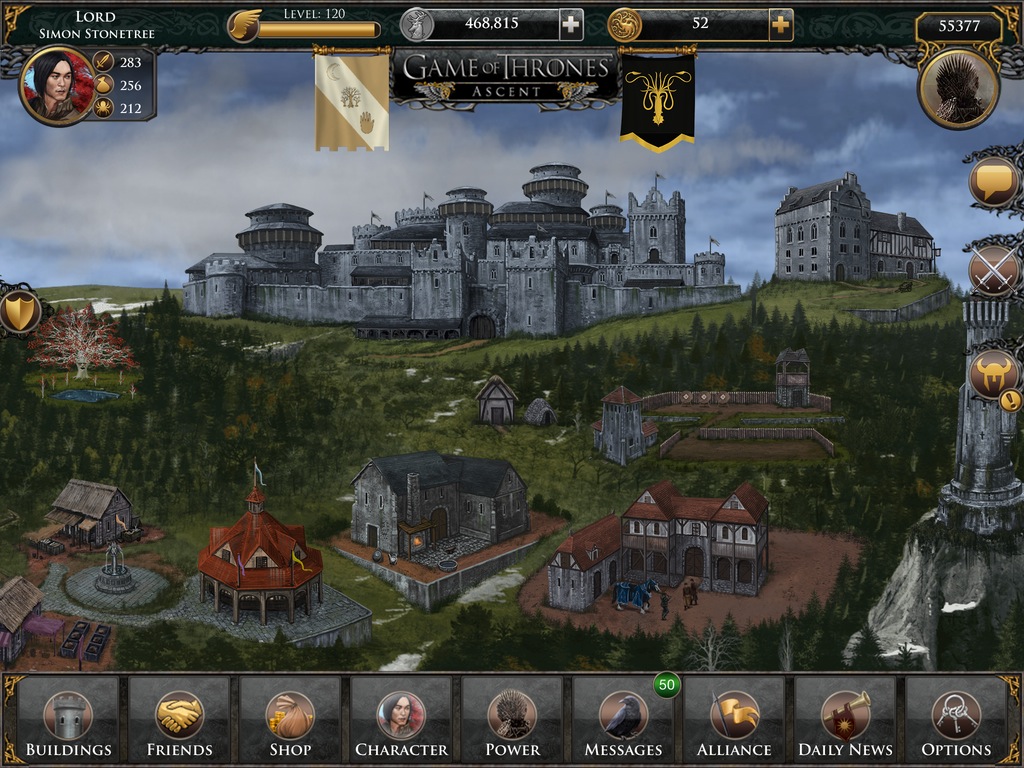 The award-winning game based on HBO’s Game of Thrones has come to the iPad! See what 2,500,000 players are already raving about!

Build your noble house, embark on quests and rise in power in the Strategy RPG based on the hit HBO series Game of Thrones and George R.R. Martin’s novels A Song of Ice and Fire!

Robots have taken over the planet! GooHoo, a tiny super-weapon is humanity’s only hope in the war against the giant killer robots.

Play Goohoo and travel across the city climbing inside the giant robots. Once inside, Goohoo’s world is all machines, cogs and clockwork. You can change the way the inner cogs move, reflect lasers with mirrors, shut down systems, drain the bots’ vital fluids and then find the detonators to blow them up, but remember to get out before you get hit by the blast!

You must descend and maneuver your bike at full speed trying to avoid obstacles using the device’s gyroscope to achieve the best time you can.

Kickball Champion of the World 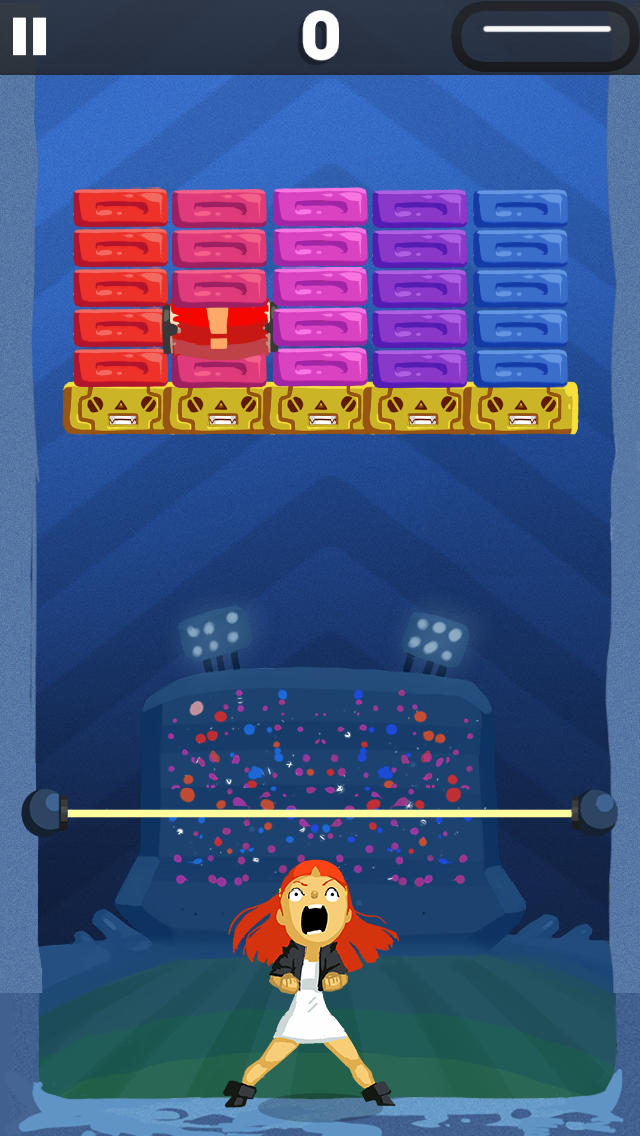 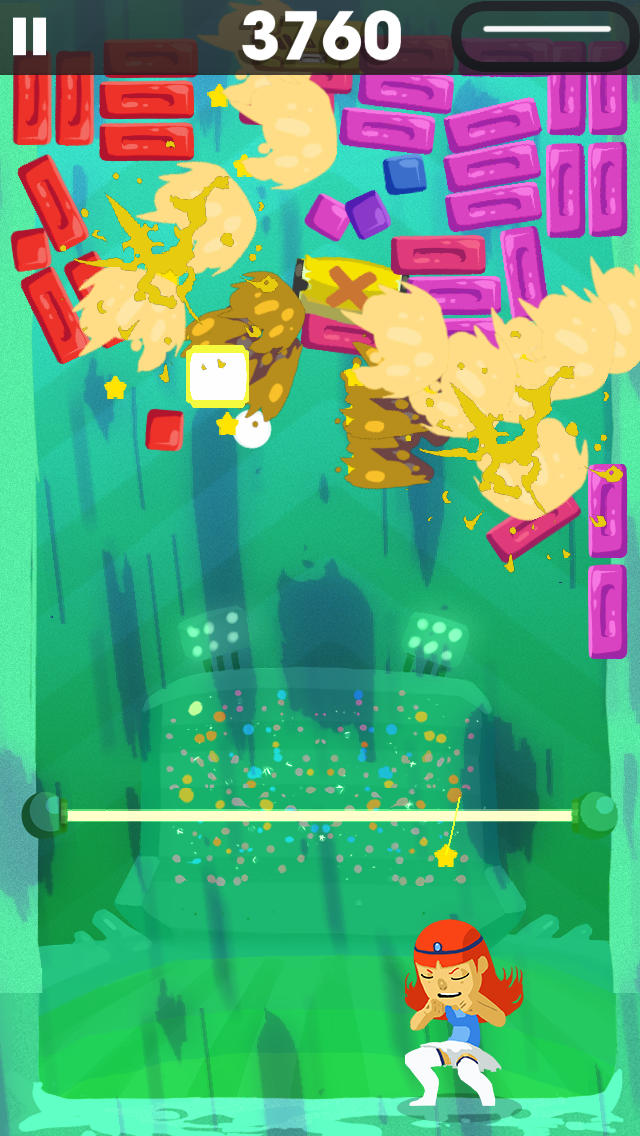 Kickball Champion of the World is the newest thing in addictive arcade gameplay!

You should buy it off me.

“King of Shmups" is an arcade top down space shoot’em up. Kill incoming enemies before the time runs out and multiply scores with combo & chains gained from each successful kills.

Goofy and endearing, Land Phil is frantic downhill dash that combines endless and racing mechanics to create a unique experience that offers fast and furious gameplay. Keep Phil upright by braking and landing instead of speeding up and jumping! Collecting prize after prize while staying ahead of the onslaught of impending boulders makes for a very challenging and highly addictive game with plenty of replay value.

You play as Twinsen, a young hero living on Citadel Island on a world under the heel of the dictator Dr. FunFrock. You’ve been having strange dreams in which your planet is about to be destroyed. These dreams don’t make Dr. FunFrock particularly happy, and he locks you away in an insane asylum. As Twinsen, you’ll need to escape from your cell and discover your incredible destiny as a descendant of a long line of magicians in charge of protecting your planet’s secret! 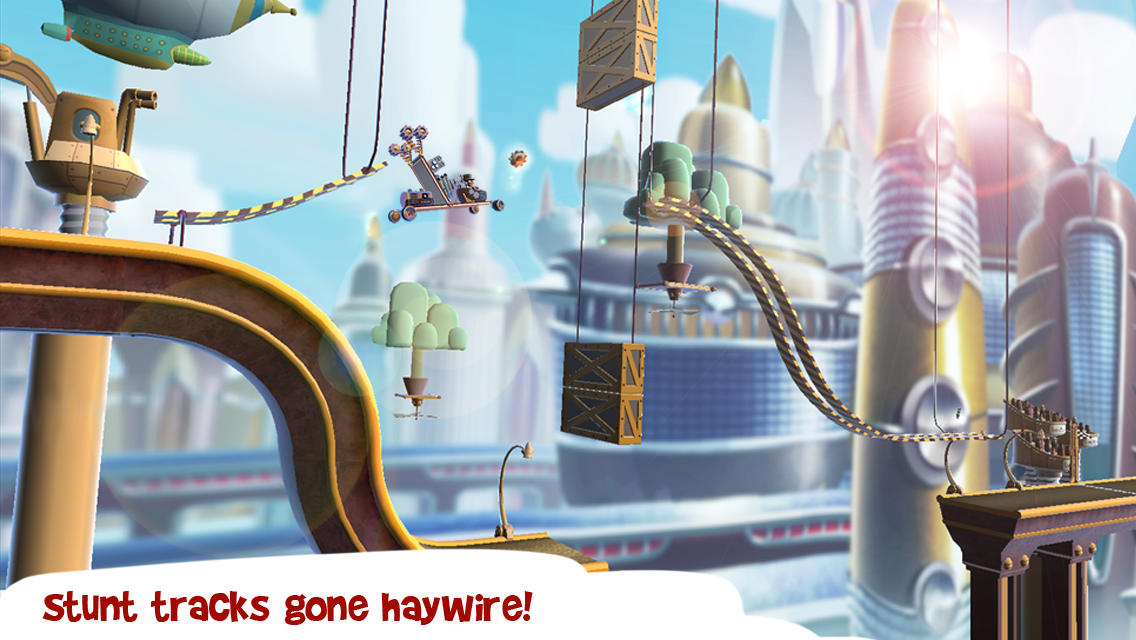 Think outside the box and create hundreds of wacky vehicles to take on Loco Motors’ unique stunt challenges. Dash through the most physics-defying tracks you’ve ever seen and share your achievements with your friends online!

So, go ahead! Unleash your creative genius and show off your crazy stunts and vehicle designs! Play Loco Motors now and have a blast defying physics… on wheels!

Maya The Bee: The Ant’s Quest

The ant queen has been infected by a strange virus. Time is running out, we have to act as quickly as possible or the anthill will languish. The queen needs your services: bring back all the necessary fruits to prepare her healing potion.

In Maya The Bee: Ants Quest you control different kinds of ants: the soldiers, the workers and the conveyors, each one of them having their own functions. Recruit new ants, beware the wasps and solve the many challenges standing in your way.

Forum Thread: Maya The Bee: The Ant’s Quest – (by Bulkypix)

Earn as many reps as you can before your arms get eaten by monsters.

FEATURES:
– Challenging gameplay gradually ratchets up the difficulty
– Over 30 ranks from “limp noodle” to “beefy” & beyond
– Earn trophies to commemorate your longest run
– Share your high scores worldwide on the Game Center Leaderboard
– No limit to the number of reps you can earn (or is there?)

It all started with the classic story about the three little piggies, but things get messed up when the third house gets blown away…

Use a variety of action packed finger-twisting gestures to HIT, PUNCH and THROW the big bad Wolf’s evil helpers out of the way and help piggies escape. 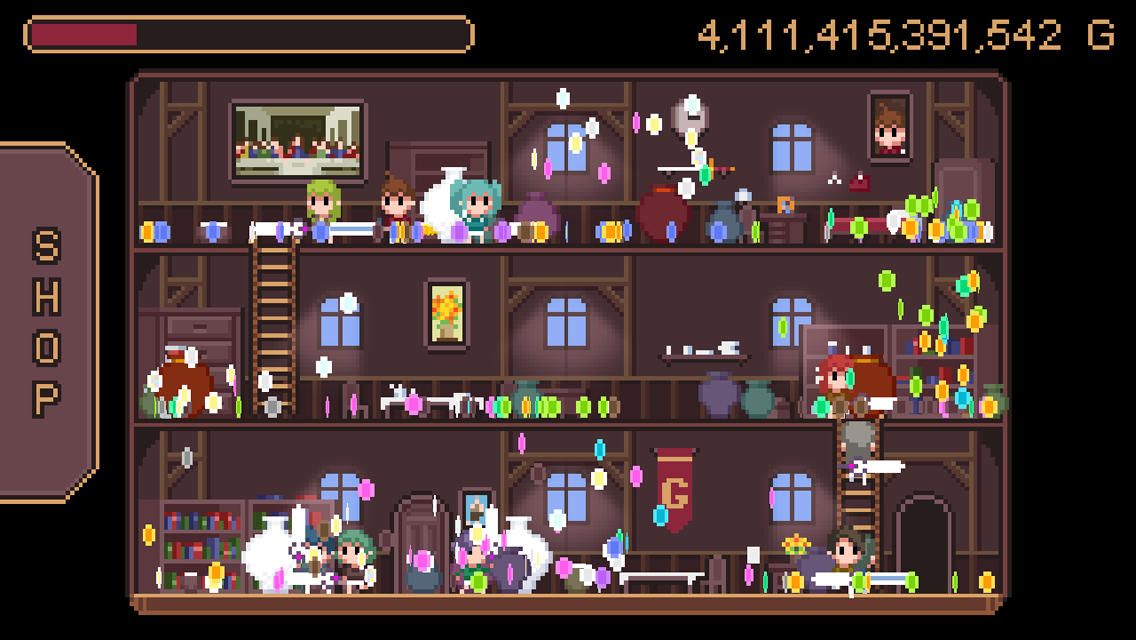 Earn money by breaking the pot as an RPG game.

Play as a fearless firefighter, making your way up a burning building. With the help of a firetruck armed with a ladder-firing cannon (obviously), you need to avoid flaming obstacles, jump from building ledge to ledge, and save a few personal items (and elephants) along the way.

Timing is everything with simple one-touch controls to fire the cannon and advance up the building.

Complete missions to earn rewards to help you along the way. Upgrade your firefighter to get to higher levels. Compete with friends on the Game Center leaderboards!

Quest of Dungeons is a turn based dungeon crawler game.

An evil Dark Lord has stolen all the light, so your mission is to enter his lair and defeat him.
By playing as either a Warrior, a Wizard, a Assassin or a Shaman you have to traverse dungeons, defeat enemies and loot everything you can in order to survive.

The entire game is procedural so you won’t find items/enemies in the same place each time you play. 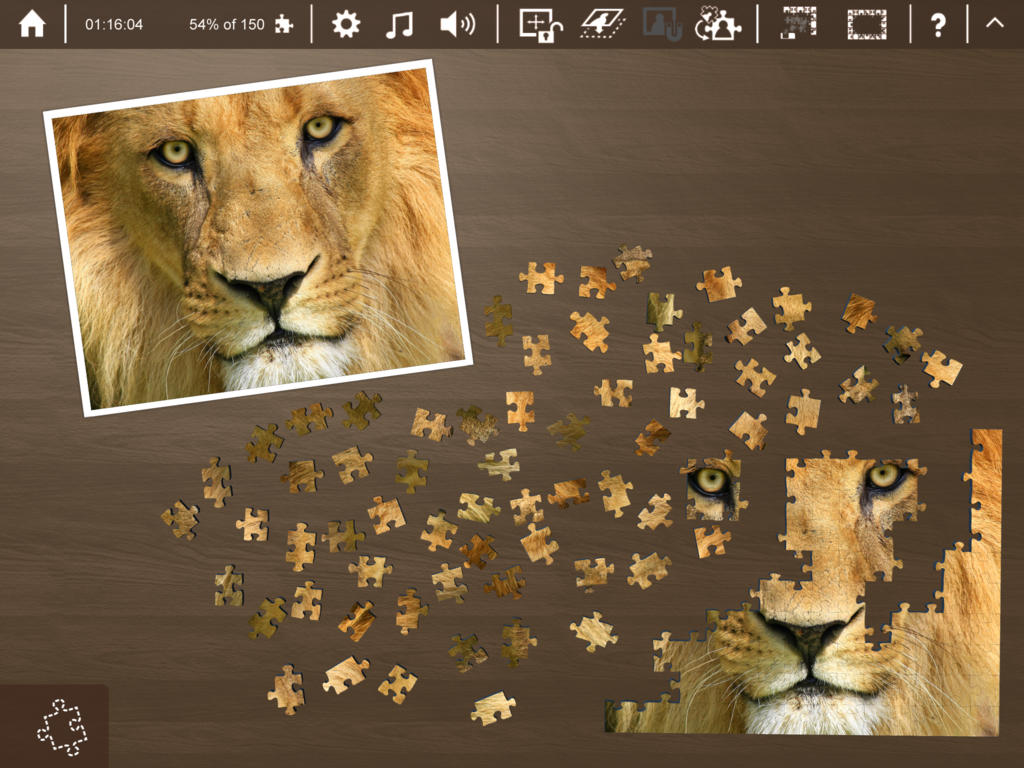 The best puzzle app for the iPad – of course from Ravensburger. A huge selection of motifs, intuitive controls, original Ravensburger quality, beginner-friendly tutorials.

For over 100 years, Ravensburger has been known as the European market leader for its high-quality puzzles. Starting immediately, we are uniting the traditions and experiences from the classical world of puzzles with the advantages and opportunities of the digital world on the iPad (iPad 2 and up).

Never before has it been so easy to follow your passion for puzzles. Whether at home or while traveling, the mobility of the tablet allows you to always have your personal puzzle collection on hand anywhere, anytime.

Get ready for wild races, reckless overtakings and tons of action in the next generation of Slot Racing!

In a game, you die.
And imply that it has no effect on you.
You feel invincible in the realm behind the screen.

This one is different.
In this game, you have to die.

Live a great adventure with this point-and-click game that combines simplicity and logic …
Can you manage to pass each level without being trapped? Try and you’ll know 🙂

You’ll face puzzles of increasing difficulty, but also many surprises in each level … it’s up to you to discover them…

Pick up speed and health boosts along the way and go faster than your friends!

Ultimate arcade challenge with innovative controls and minimalist design – that’s what 0-SNAKE is about.

Most important rule: one touch is enough for 0-SNAKE.

Improve yourself and beat the world record.