Supercell’s Boom Beach (Free) was just released worldwide today, and to say the tutorial leaves you hanging is putting it lightly. Kanye can’t even drop the mic as hard as Supercell does when it comes to explaining to players how to play the game. Maybe it’s because they assume people playing Boom Beach are intimately familiar with Clash of Clans (Free), but Supercell really doesn’t leave you any bread crumbs for what to do next after the first few minutes of gameplay.

It makes sense, as I can see tons of crossover between Clash of Clans players and new Boom Beach players, but I figured I’d write up a quick guide for the other people out there like me who never really had Clash of Clans click for them but are interested in giving Boom Beach a try. So, like Clash of Clans, at its most basic level the gameplay loop of Boom Beach involves building a base to defend your resources while attacking enemy bases, both players and NPCs, to capture resources. 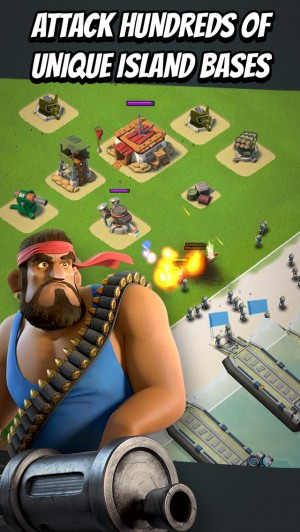 As a beginner, the only two resources you’ll have access to are gold and wood, and each has a distinctly different function. I feel like in the early game wood is your “main" resource, as it is used for buildings and building upgrades. It feels a little weird to be building military-themed weaponry with wood planks, but, whatever. Gold in early levels is primarily used to recruit troops for fighting, and revealing more of the ocean map to find more islands to conquer. The premium currency is diamonds, which, like most free to play games, are used to speed up timers and fill in any holes with the other currencies you might be missing.

To understand how to properly defend your base, it seems easiest to explain how to successfully siege a base and you can apply the reverse logic to your own island. Assuming you’ve got your radar built and some of the map revealed, you’ll want to be looking for the lowest level NPC island you can find. It seems like picking off low level enemies first is the way to go because there’s no penalty for spending tons of time going through effortless opponents. Boom Beach doesn’t have an energy mechanic, so even though the rewards might be low(er), slow and steady wins the race.

As explained in the tutorial, you launch your troops on the enemy beach by tapping wherever you want them to go. Initially, all you have access to is the ability to dispatch troops and the artillery shots from your gunboat. Early battles can be a little frustrating because you don’t have any control of your units once they leave the boat, as they’ll just aggro on whatever they come across first and mindlessly get picked off by sniper towers while they fire away at barrels or some other non-threatening structure. Stick with it, as the tutorial doesn’t even give you any hints that flares are coming for your gunboat, which allow you to mark terrain for your soldiers to walk to or buildings for them to attack. Flares are available once you upgrade your base to level 3. Once you get past that initial frustration, things get a lot better.

As you’re attacking islands, your priority goal should be keeping as many of your high value units alive as possible. As soon as you get your first heavy gunner you’ll realize how much longer they take to replace and how much gold you effectively lose when one of them dies. Comparatively, your riflemen make great cannon fodder as they’re both quick and cheap to replace. But, because your heavies are effectively your tank-like soldiers, you’ll want to send them in first. The best thing I’ve found to do is let heavies sponge damage, then shoot a flare if you’ve bitten off more than you can chew to enemy defenses switch targets to riflemen, then shoot another flare to re-engage. 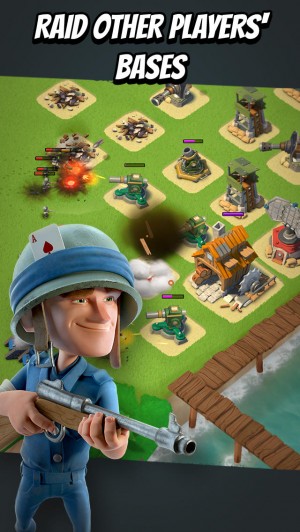 After either a few hours of hammering away at low-level NPC islands or dropping some money on IAP to power-level yourself up, you’ll come across some low level human opponents as you continue to reveal areas of the ocean. Scouting, or looking at other islands, is totally free, so what you want to be looking for are players who have, for lack of a better way to put it, built their base stupidly.

Look at islands and imagine the path your soldiers can take. In my experience, low-level players really like spreading all of their defenses out instead of focusing them around their headquarters. It has, for instance, been exceedingly common to come across players who have all of their towers spread out along the front line of the beach. This might seem like a good idea at first, as you obviously want to shoot down soldiers storming your beach, but consider as soon as soon as those defenses are breached you’re home free.

In a situation like this, you can basically just target your troops and artillery on the defenses that would be in your way to attacking their headquarters. It’s easy pickings, and seems to happen all the time. When attacking player islands, it’s a good idea to focus your artillery fire on whatever the most threatening defense in the enemy base would be. At low levels, mortars are particularly deadly, as you don’t often have enough energy or enough flares to go around to avoid the massive splash damage that can take out entire groups of guys.

After conquering a few player islands, it should be exceedingly obvious what sorts of layouts are very easy to defeat and what crushes your offenses. At low levels, the best place to put your headquarters on the severe eastern side of your island, as deep in to the north eastern tree line and docks as you can. From there, arrange your defenses in a way that maximizes the amount of tower overlap you have. Instead of lining up your towers, think of them as rings of protection around your headquarters, and be sure to leave space between each of them so you don’t afford your opponents the ability to target two of your towers at once with one artillery shot.

Check out my current setup, which has worked very well so far: 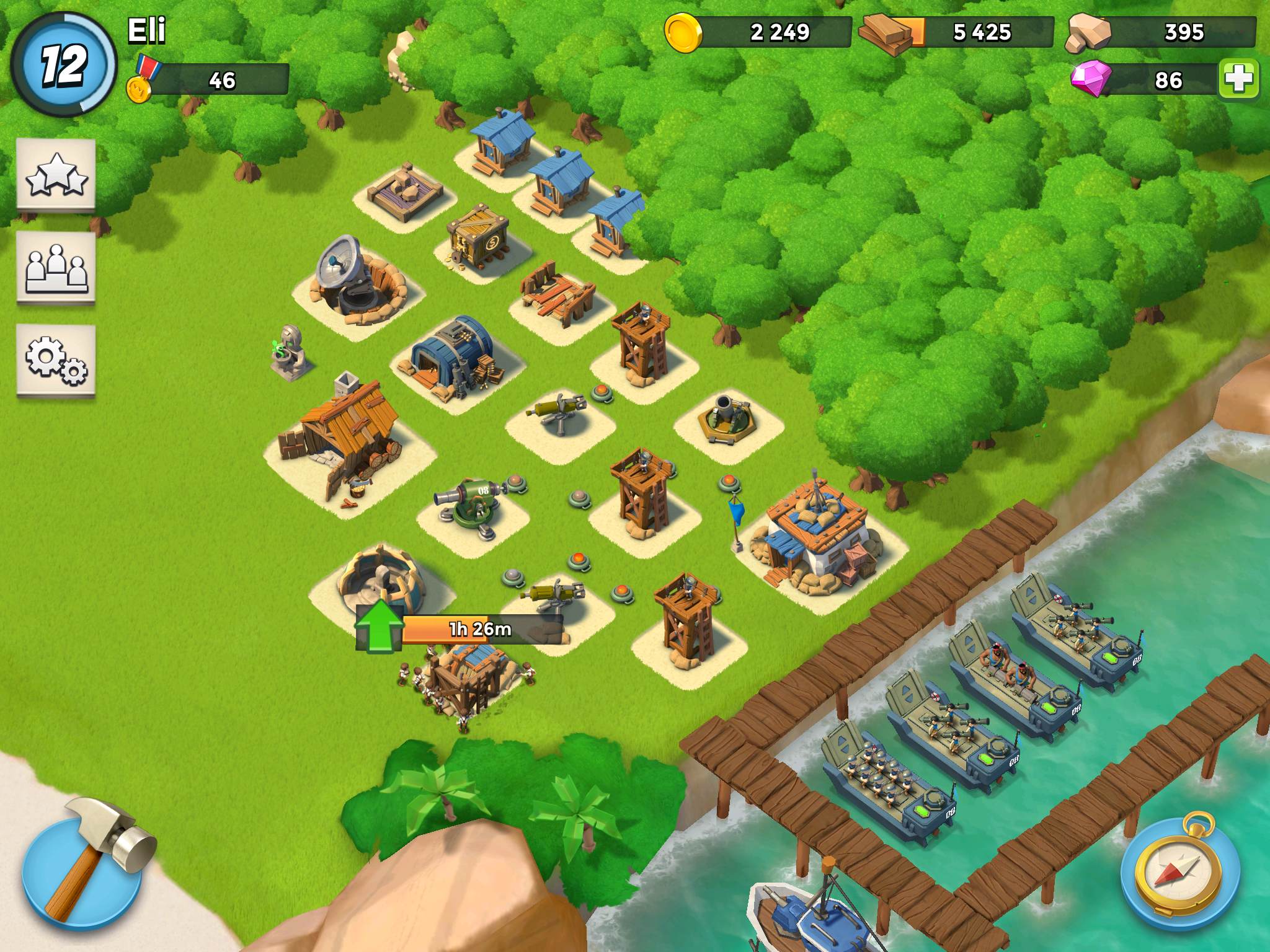 I’ve got my sniper towers in a way that two of them will be firing on troops at once, and my bigger guns spaced apart enough that enemies won’t have any advantage by specifically focusing one tower. You also don’t want to try to use your non-defensive buildings to form any kind of wall. Making your support and economy buildings easy to kill just feeds the enemy energy which feeds the artillery cannon of their gunship.

It’s also a good idea to prioritize upgrades on your vault, as especially while you’re leveling up and gaining access to more varied defenses, you’re inevitably going to get beaten once in a while. A high level vault is vital in keeping as many of your resources as possible safe. You don’t want to be put off your next big upgrade because some punk sieged your island.

Overall, you really want to approach everything you do in the game as a potential learning experience. When you come across a clever island, see how their defenses worked and what techniques you can incorporate in to your own island. Additionally, after every attack on your island, be sure to view the replay by going to the ocean map and hitting the menu button on the top right, and tweaking whatever seemed easy for the enemy player to get through or deal with.

Boom Beach seems to be a game of iterative refinement. You’re not going to win every battle, and you’re not going to fend off every attack. If you learn something neat that you can apply in the future, it’ worth losing a few resources.

Anyway, Boom Beach is a surprisingly deep free to play game that could have guide content written about it for ages. This is merely a very high level overview covering some of the things that confused me that weren’t covered in the tutorial. I didn’t even touch on what you do with stone, unit upgrades, or anything else. We’ll save that for another guide.