If you’re looking for some slapstick arcade shooter shenanigans, then Pixeljam’s Glorkian Warrior: Trials of Glork (Free) will most likely be your new favorite game. The goofy mashup is a collaboration between Eisner Award winning cartoonist James Kochalka and indie game studio Pixeljam themselves, the very same developers of the prehistorically entertaining Dino Run!

Don’t be fooled, this is no space invaders. Taking on the role of a Glorkian Warrior, you and your trusty Super Backpack sidekick must battle an endless onslaught of alien creatures as they hypnotically dance their way across the screen – (if you’ve played Galaga, this may come as familiar to you). As you run and jump back and forth, obliterated enemies will drop energy crackers, which you can pick up to create some bullet hell warfare with an impressive combination of double lasers, twisty lasers, triple lasers and fireballs, to name but a few. 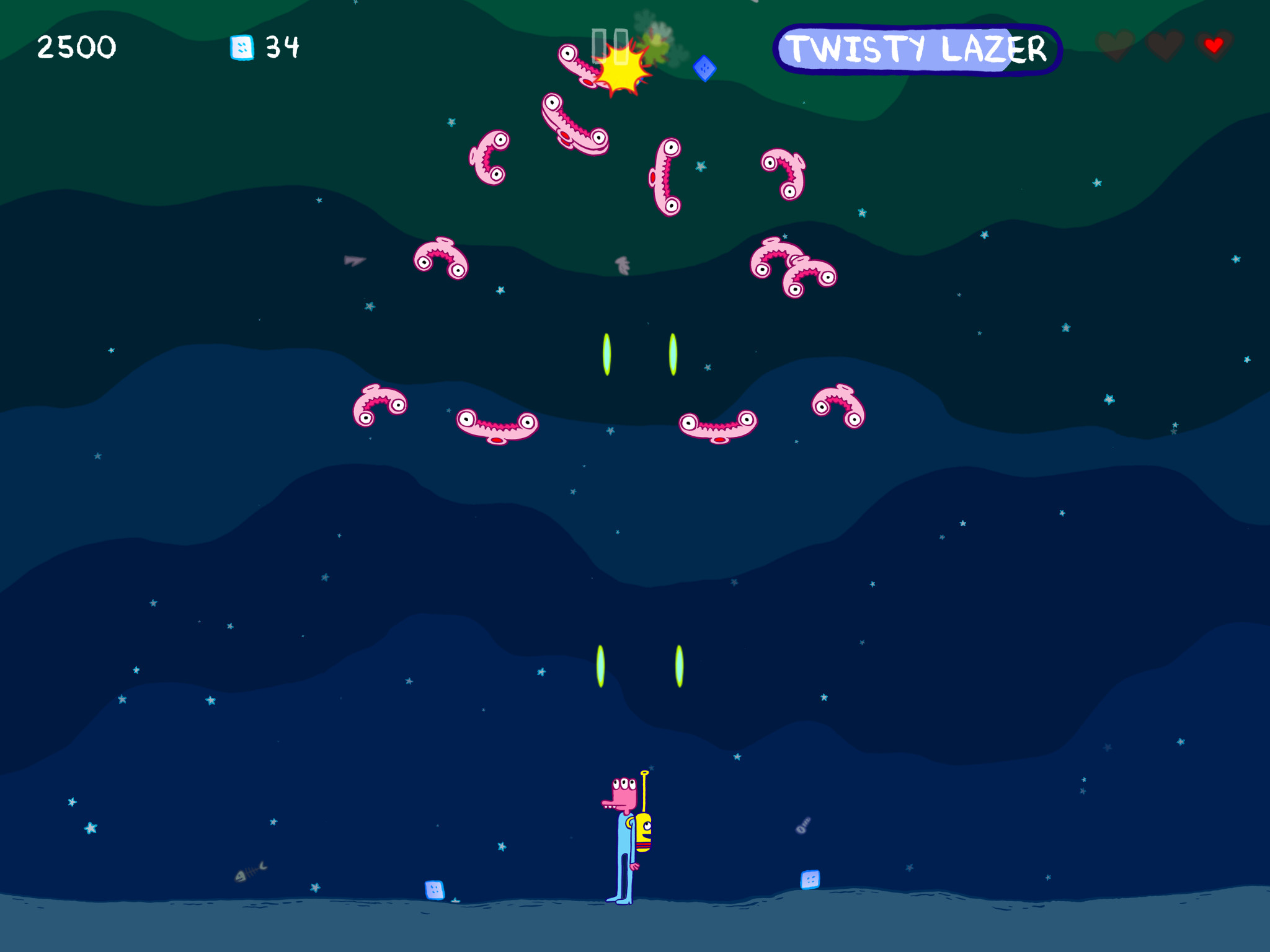 So what can you expect? For one, failure is inevitable. Whichever mode of difficulty you may be playing it on, you can still expect to be annihilated several times over. Before you start throwing your iPhone or iPad in frustration though, keep in mind that each separate playthrough adds up to your overall progress. It’ll never get boring, and it’ll never get old. Not to mention, the amusing skits before and after each session of play are worth every moment of defeat.

As eye-catching and awesome as Glorkian Warrior is, there are some slight gripes that sometimes get in the way of the enjoyment factor. Though there are three different control systems, the “default” controls, which are recommended in-game, are the ones I found to be the most problematic. In this mode, you tap either side of the screen to move right or left, and swipe up to jump. 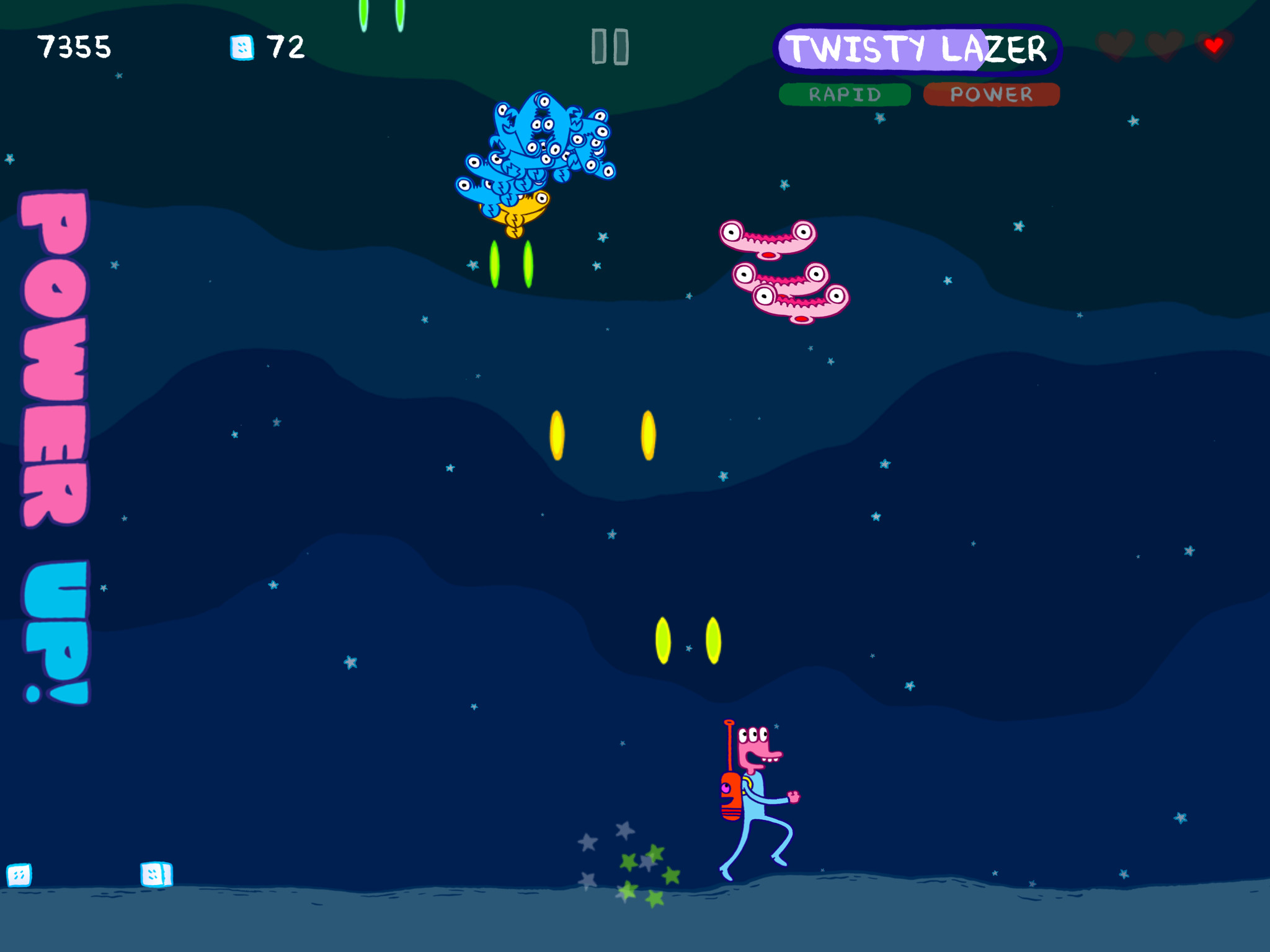 Sometimes they managed to flow well, other times I’d find they were touch-and-go especially when the difficulty ramps up and precise jumping becomes key, so if you’re as easily frustrated by dodgy controls like I am, you’d be better off switching to a more preferable choice like the virtual D-Pad. Luckily, the alternatives are pretty solid, so it’s not so much a disappointment as just a mild grievance that can be just as easily avoided.

Another frustrating factor is exhausting all your powers when you’re in the midst of a boss fight, which means combat can get pretty tiring at times when you’re left to kick huge alien butt with the default blaster. You fire automatically, so it’s not like you can be strategic with when you use your powers, which makes these sort of situations feel a little too luck based that powerups drop at the right times. 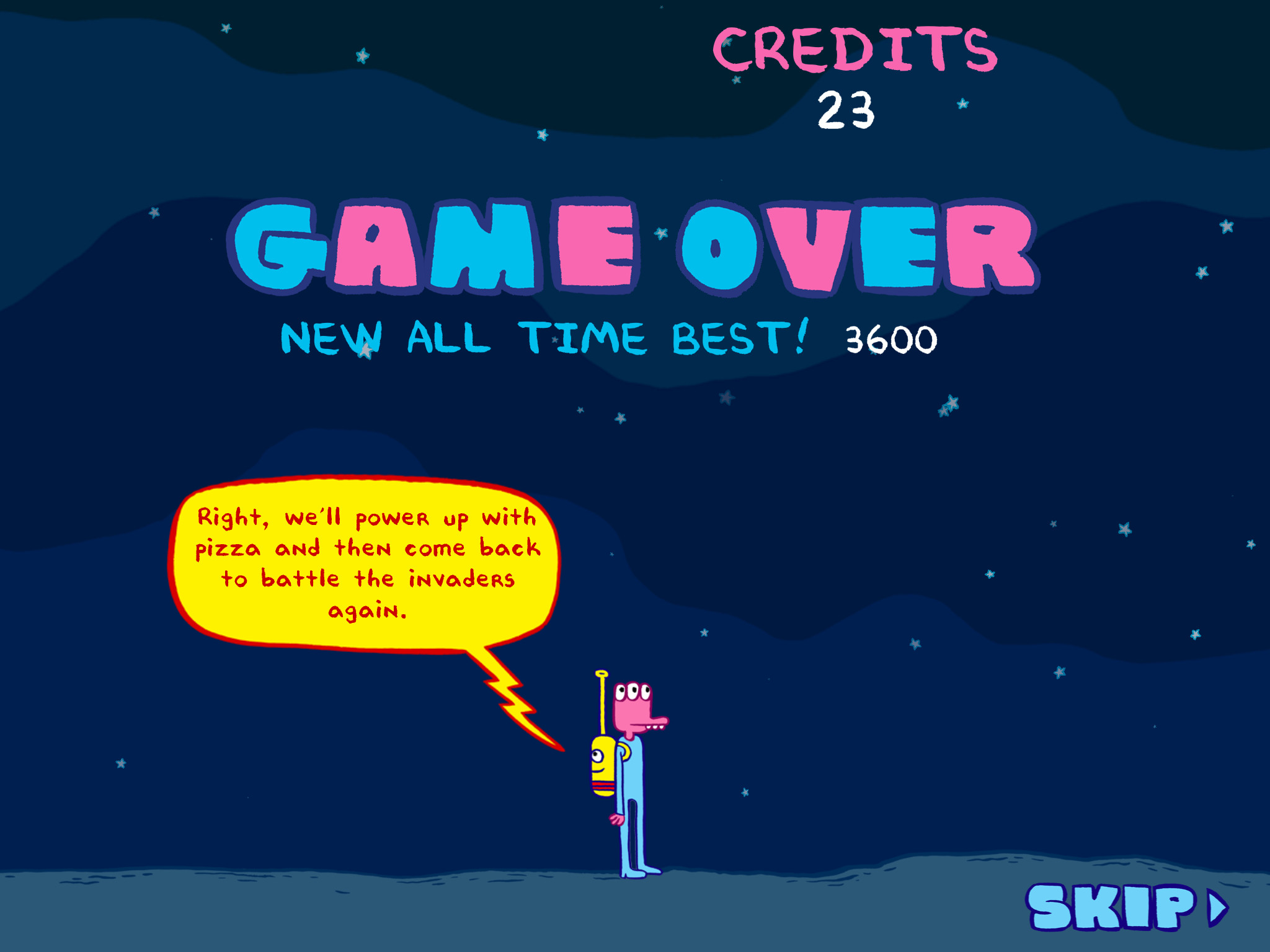 That said, it’s not all bad, as accumulating crackers unlocks new items and worlds which keep gameplay fresh and exciting. The ongoing determination to best your friends scores also adds huge replay value, and you’ll want to keep coming back if just for the competition of it all.

The vibrant cartoony visuals are beautifully conspicuous and the fantastic soundtrack compliments the game to a T. If you’re also wondering why it looks and sounds so oddly familiar, James Kochalka is indeed the mastermind behind the brightly colored, beautifully designed graphic novel “The Glorkian Warrior Delivers A Pizza,” which you should also pick up if you’re a fan of reading, outer-space adventures and pizza.

You won’t want to miss out on Glorkian Warrior: Trials of Glork, especially if you’re a huge fan of arcade shooters with hilariously great jokes and some marvellous comic visuals. It’s got a few flaws, but the good vastly outweighs the bad.