It’s that time of the month again, where Kemco releases another RPG from their stable of developers using the same old engines and… Sweet Merciful Odin’s Beard, it’s 3D! Only partially, but still! Okay, I’m being a little flippant here. Most of Kemco’s developers have each brought out a new engine in the last couple of years, but Alphadia Genesis ($9.99), from Across Age 2 ($3.99) developers EXE Create, is the first one to use polygonal graphics. It’s a superficial advancement, to be sure, but a welcome one from a publisher whose games are generally pretty hard to tell apart for the layperson. It’s something of a half step, since only the battles are rendered in polygons while everything outside of them uses the same old 2D sprite engine, but that’s to be expected considering the giant jump in scope and budget going full 3D would entail. So, less Final Fantasy 7 and more Wild Arms, but it’s still kind of cool to see a polygonal JRPG on iOS from someone other than Square Enix.

Still, beauty is only skin-deep, so let’s take a look at what’s behind the curtain. Last time in the world of Alphadia, it was hundreds of years in the future, so I guess it actually doesn’t matter. This time, we’re following the misadventures of young orphaned (of course!) guildsman Fray, who is appointed by the king of Archleign to head up an investigation into a murder in a nearby town. The results of his investigation will have major implications on society, and there’s naturally more going on than initially meets the eye. Joining him is a varied cast of characters, including his genius little sister Aurra, the powerful magic user Corone, her protective colleague Walter, a roguish fellow named Grande, and the mysterious clone Enah. Fray’s the optimistic type of hero, a little oblivious and a bit too trusting. He’s not as interesting as some of EXE Create’s other protagonists, but the other characters make up for his somewhat shallow nature. 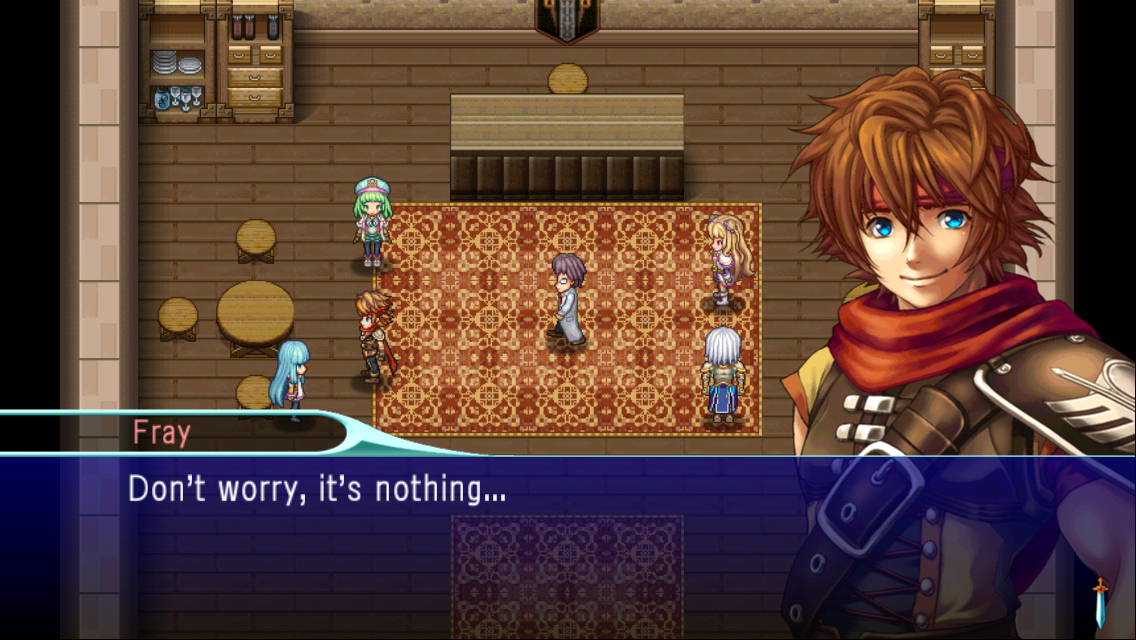 For the most part, you’ll do the same sorts of things you usually do in these types of games. You’ll travel the world one town at a time, solve big problems and help out people with smaller ones, make your way through dungeons, caves, and forests, and lay waste to all manner of local flora and fauna. All told, the game clocks in at a fairly lengthy 15 hours or so for the main quest, with some post-game content and a different ending for the ambitious player. The story has a few twists but you’ll probably see most of them coming. Luckily, the character work is strong enough that you’ll probably have a good time seeing it through anyway. Enah is a particular cast stand-out, pulling off the mysterious girl shtick a bit better than the norm. As usual for EXE Create, the translation is extremely inconsistent, with some passages coming out surprisingly sharp while others come out very awkwardly phrased. Fray has the same odd style of speaking that EXE Create’s other main characters have, but it fits him poorly, since unlike their usual heroes, he’s not meant to be socially awkward.

In terms of gameplay systems, Alphadia Genesis doesn’t venture far from the beaten path. Battles are turn-based and feature the typical options of attacking or using more powerful skills at the cost of EP. You can have four members in your active combat party at one time, so once your party is full, you’ll have to have two characters on the bench. As you battle, a meter will fill, and once it’s full, your benched characters can jump in for a special support combo move at no cost. They’ll gain experience points while sitting out, so nobody gets left behind, at least. Character building options are fairly limited. You can equip rings of various elements to your characters that will also gain experience points in battle, unlocking new magic that you can use as long as you keep the ring equipped. Apart from this aspect, your characters will more or less turn out as they’re meant to, with particular patterns of stat growth and skills they will learn regardless of anything you do. The only way you can really push your stats around is by equipping accessories which, as this developer likes to do, will give boosts to some stats while penalizing others. 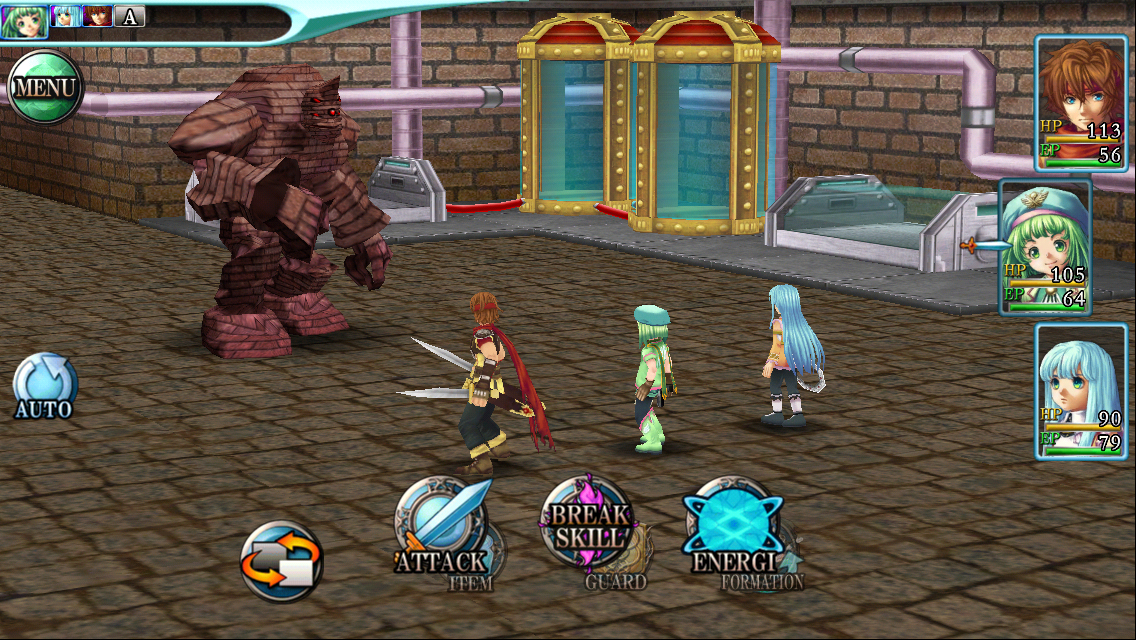 The dungeon designs are pretty good, with lots of hidden passages to uncover, leading to useful treasure if you keep your eyes peeled for cracked walls. Backtracking is rare, and there aren’t very many useless dead ends, so it’s actually quite fun to play through the dungeons in this game as compared to something like, say, Covenant of Solitude. Random battles pop up pretty frequently, but the game actually warns you when one is coming via a colored border around the screen, so you’re never caught unprepared. Along with the usual habit of warning you when a boss fight is coming and topping off your HP and EP when you level up, this goes a long way towards keeping the game feeling fair and enjoyable to play.

That’s not to say that the game has no teeth, because it certainly does in places. You can adjust the difficulty setting, and while the default difficulty is only tricky in parts, the hard difficulty consistently demands a good bit of strategy and resource management on the part of the player. I’m glad they’re including these difficulty settings now, since Kemco’s clearly been pushing the default difficulty setting down in the games they publish for a while now. Speaking of the publisher’s influence, Alphadia Genesis, like most of Kemco’s recent games, offers IAP in the form of special points you can buy and exchange for cheat items. Many of the items are available in-game anyway, and none of them are things like keys to special dungeons or the like, so you can experience the game fully without buying anything extra.

Different from usual, you cannot earn these points by fighting enemies. Rather, you can find them in-game by observing your surroundings carefully. If you see a suspicious place, you can pinch to zoom in and take a closer look. If there’s a sparkle, congratulations, you’ve found some points. It’s an interesting change. It rewards you for exploring, but at the same time, there’s a finite amount of points you can get without paying now, as opposed to before when you could just grind them out forever. I don’t mind in this game, since nothing is really integral to the story, but I don’t quite trust this system with Kemco’s other developers, so I hope it’s a one-time thing.

I’m of two minds about the new 3D graphics. The modeling is alright, but the animation on the monsters is awful and the variety has taken a serious hit compared to EXE Create’s 2D games. You’ll fight so many odd-colored and/or sized-up versions of the same small group of enemies that by the time you reach the end of the game, you won’t want to fight a bulbous chicken-thing ever again. The main characters look good, and they have a few little animations each to give them a touch of personality, but they’re definitely less animated than their 2D counterparts in prior games from this developer. Still, it’s cool that they’re taking a step forward, and I imagine each subsequent game will be slightly improved thanks to having an established base to work from. 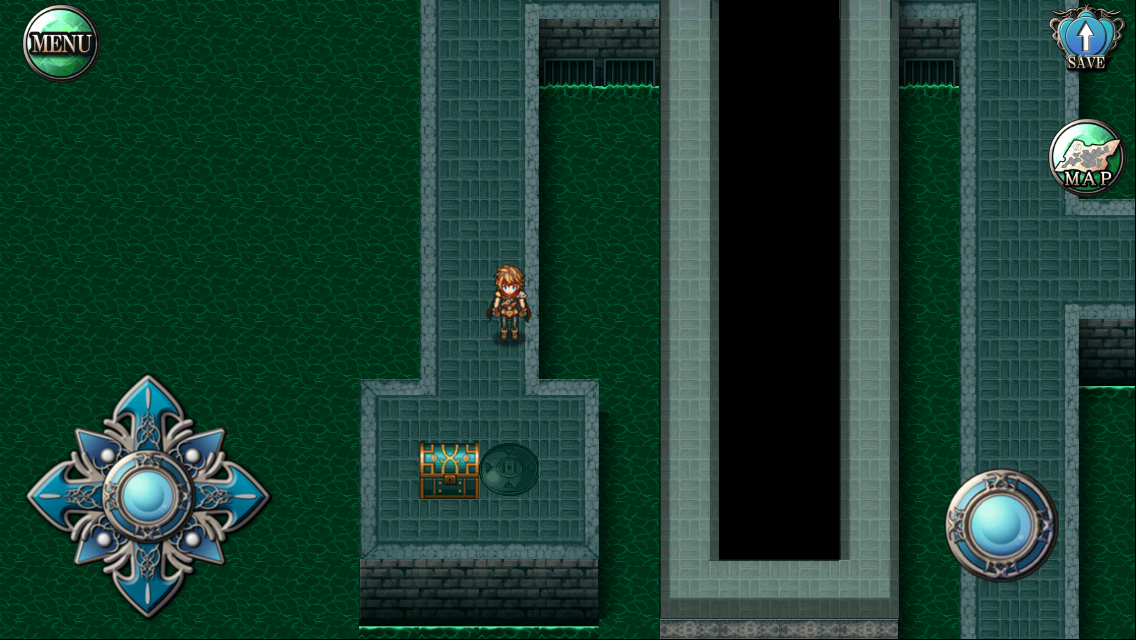 I’m less enthused about the continued presence of choppy scrolling outside of battles. My expectations are realistic so I know going full 3D isn’t going to happen anytime soon, but I’d at least like to see them fix this nagging relic from their feature phone days. Apart from the scrolling, everything looks great. Lots of variety in towns and dungeons, and everything is very crisp. The characters could probably do with a few more animations for expressing themselves, but there’s a certain charm to the rough pantomime involved in the way scenes play out, so it’s generally not that bad. There’s a fair amount of voice acting in the game, but it’s all in Japanese, and to be frank, it’s horrible. The music is decent, with a few more songs than Kemco games typically have, but to be honest, nothing in the soundtrack stands out all that much. This is one area where I really would like to see some improvement. So many of my memories of great JRPGs are fully tied to wonderful pieces of music, and I think it’s the biggest piece of the presentation puzzle missing from Kemco’s mobile fare.

All things considered, I think this is probably the best EXE Create RPG that Kemco has published. I still think Unlucky Hero (Free) is the better game of the two, simply because it doesn’t play things quite as safely as Alphadia Genesis does, but this is a slight step above Journey to Kreisia ($7.99), Infinite Dunamis ($3.99), and the other Alphadia titles. In terms of gameplay and overall story, it’s still just another generic quest, but the mostly strong character work combined with the novelty of the 3D battles help keep it from feeling too stale. It’s not going to do much for those who are weary of the genre, but fans should be fairly pleased with this outing.