Weird hair, strange mumblings and an unhealthy sleep pattern walking around alone in spooky houses. Could it be Mikael Myers or Norman Bates? No it is the Lodger.

Knock-Knock Game ($0.99) is a strange experience in many ways. At times it feels unfinished, as if it hasn’t really left the brainstorming session where it was spawned. Just the first screen that greets you when starting the game stating that it might be more of an interactive meditation than an actual game. At the same time the word Game is used in the title. It does however have enough elements of gaming to be called a game: progression of difficulty, and the chance to improve your performance.

The star of the show is the Lodger: a wonderfully weird man that almost find his strange journey to be a slight nuisance whereas normal people would stay hidden under the bed until daylight. Surviving the night, and getting out of the house when dawn breaks is the main concern for the Lodger. Why he is in this situation with a house crumbling, and cracks where the outside peer in we only get told in random mutterings. 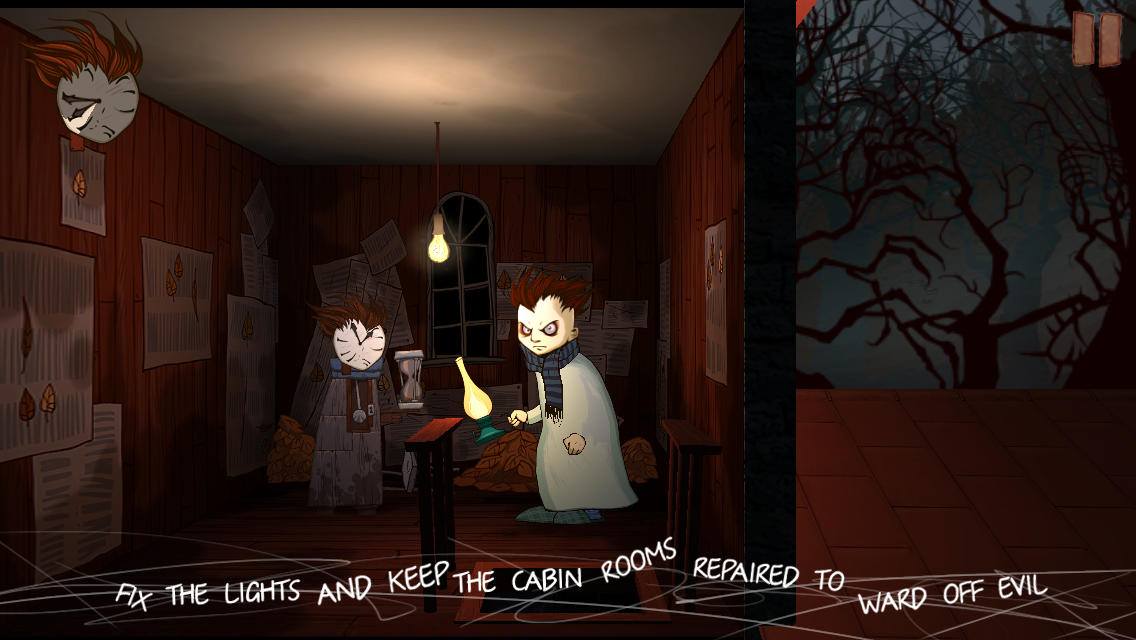 To move the Lodger you tap, and hold one side of the screen. Lamps can be mended, turned on and off by swiping up or down. Stairs are climbed by swiping up, or down with a more determined finger. At times I found these gestures to be mixed up, and I kept playing with the lights instead of climbing a ladder. For the most part the controls hold up well, but at those occasions when a monster is hunting you they are a bit slow to respond. There is support for an external controller as well, but I haven’t had the chance to try it out.

There have been quite a few artsy adventures, or horror games lately that are sparse on information on why, and how you should play. Year Walk is perhaps the best example of when this minimal approach works well. In Knock-Knock Game there is a whole lot of information, as the Lodger is quite a talker. Most information is about the situation, and how he feels about for example clutter. There isn’t much told about why, or how he should get out of his predicament.

Another aspect where Knock-Knock Game misses the mark is the lack of juxtaposition between normal and weird. Most successful horror games manage to insert weird in an almost normal context. For example Silent Hill that can change the scenery from normal to hell by just opening a door to the ladies room. Or any movie about the zombie apocalypse where the unsuspecting heroes enter a shop just to find it invaded with rotting undead. In Knock-Knock Game it is all weird, and after playing for ten minutes it becomes routine to see horrendous eyes peering at you, or babies crying in the background. I would have liked to have levels where the Lodger is happy walking about in a light world to make the darkness so much darker.

The Lodger is an interesting character thrown into a game that tries too hard to be strange. After finishing the game within the three hour mark there is little to no reason to go back, and the game didn’t leave me with a lasting impression due to having perhaps too many wacky visions thrown at me. A bit like watching a Monty Python marathon where you remember the fish slapping, but not all the weird animations.