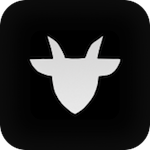 I was in a panic. An actual panic.

The forest around me was changing, and I couldn’t find my way back to my cottage: I was hoping to methodically explore the map, hoping to impose logic onto a shifting, supernatural landscape. It was dark, I was lost, and the Swedish snow was falling interminably — my heart beat a little faster, I was sweating despite being in bed under a blanket, and I became upset enough to close Year Walk [$3.99] and browse Twitter for a while. It got in my head.

Granted, I was playing Simogo’s latest horror-puzzle-exploration game in ideal conditions. It was dark, it was raining, I had was wearing headphones. But, Year Walk has an undeniable sense of place. It’s a gripping, somber, atmospheric, and elegantly-designed game, and everyone should play it. 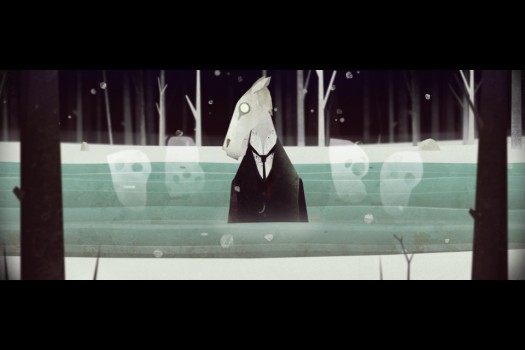 Here are the basics: Year Walk is a first-person puzzle game based on the Swedish myth of the same name. People who wish to year walk isolate themselves and refuse to eat or drink for a full day before striking off toward the local church at the stroke of midnight. If a year walker makes it to the church, he or she will see into the future, but the price paid for such a luxury is almost always high. There are monsters out in the snow you don’t want to meet.

In practice, the game functions like any number of adventure games: the playable space is cordoned into discrete screens with transition points scattered throughout. Two-dimensional objects sit on a large three-dimensional plain, and each new screen comes into view like a pop-up storybook or a theater prop, coupling with the stark black and white art to create a dreamlike environment. 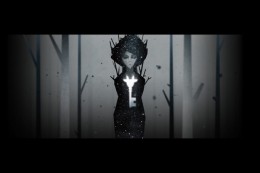 It helps that the woods around the church feel geographically impossible: even after playing the game twice, the relative location of each major area is unclear to me. As more creatures are encountered and and puzzles are solved, once-familiar areas will start to change: bloody footsteps appear out of thin air, or a nearby windmill might start and stop without warning. Simply moving through the world of Year Walk evokes the supernatural folklore that drives the story, reminds you that creatures like the Huldra don’t follow the rules of space and time.

Simogo have also released a companion app to Year Walk [Free], a slick encyclopedia of the concepts, creatures, and lore the game introduces. The companion will also explain, for example, the relationship between a Myling and the Brook Horse, or how to figure out if a Night Raven has infected an egg. The companion app does all of the heavy lifting for the game’s lore, keeping Year Walk itself from being overly expository, and it includes little details that might help you work through some of the game’s puzzles.

The companion’s most important contribution, though, is that it adds another layer of fear onto the game. Knowing which creatures exist and what they’re capable of — but not knowing where they are or when they will strike — makes every screen transition, every peek inside an abandoned shack fraught with apprehension. 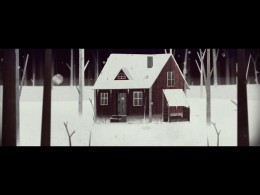 Year Walk is a sparse, stripped down game, and every element feels designed specifically to reinforce the game’s narrative mood. The soundtrack is a haunting mix of light folk music and discordant chamber music, complimented by crunching snow, creaking floorboards, snapping twigs, and the bloody gurgles of creatures going bump in the night.

There is a fine line between utility and elegance, though, and the lack of text or direction can sometimes hamper players’ progress, which can break the game’s atmospheric tension. Your mileage may vary, but there is one early puzzle that I’m confident I’d have never solved without outside help. Still, the majority of Year Walk is intuitive and easy to grasp. The thrill of solving each puzzle is in catching a glimpse of the world’s gruesome logic rather than prevailing in some battle of wits. The puzzles only exist to serve a lore that requires a grueling psychological test before the year walker is allowed to proceed: they are interactive world-building elements of a world that never ceases to be engaging and terrifying.

The setting and premise of Year Walk are its strongest features and its guiding principles. It’s a delicately and precisely-paced game that pulls all of its design elements toward one goal: the over-arching dread of dealing with dark and dangerous things, the fear of pushing too far into the supernatural. Eventually, the story breaks free of the confines of Year Walk itself — to say more about the endgame would be to spoil a series of meta-events that gave me goosebumps.

If you’re willing to buy into Year Walk, to explore it’s shifting landscape and learn its lessons, you’ll find a tremendous game. I’ve never played anything quite like it.