The subject of monetization on mobile is a tricky one. Obviously, starting in the early days of the App Store, a “race to the bottom" mentality developed and created a world where if something cost more than a dollar then it was a hard sell for iOS consumers. Frequent price drops and the potential to spend money on total garbage has trained iOS gamers to wait before plunking down cash for something. It’s a big reason why free to play has taken off the way it has. Here, it’s free to begin with so there’s nothing to lose in just downloading a game, but now we have to be wary of how the monetization scheme is handled. It was much simpler when you could just buy a game, whether it was bad or good, and just get the whole enchilada up front for the initial cost, but those instances are few and far between nowadays. Like it or not, we live in a world dominated by free to play.

This can lead to some unfortunate circumstances, though. For instance, a previously paid game switching over to a free to play model. It makes original purchasers of the game feel “burned" that they paid for something that is now free, and now must deal with freemium shenanigans that they never bargained for in the first place. A recent example of this is the game Dead Effect (Free), developed by inDev Brain and published by Bulkypix, which this week went permanently free alongside its newest content update. As you can imagine, they’ve been receiving a pretty mixed response from people in our forums. Some are livid, and have immediately deleted the game in protest and have sworn off ever supporting either the developer or publisher again. Others are more moderate towards the switch, understanding that the world of mobile games is a tough business and sometimes you gotta do what you gotta do.

Today, both Bulkypix and inDev Brain have chimed in on the discussion taking place in Dead Effect’s forum thread. Basically, the paid version of the game has not done well, and the options were to try and go the free to play route or drop the project on iOS entirely. They have also tried to do right to their original paying customers by giving owners of the game who download the update a hefty slice of premium in-game currency, about $20 USD worth according to inDev Brain. Whether or not you feel this is sufficient compensation or if you agree with switching the pay model isn’t really what I’m here to talk about. Rather, I’m more interested in a tidbit of information inDev Brain revealed as part of their explanation for the switch.

While this may not be the case for every game and every developer’s situation, it makes the choice of going paid or going free to play when launching a game seem like not a choice at all. You are putting yourself at a disadvantage by going paid, unless you’re in a situation where you can sustain yourself off of not very many downloads. In the case of something like Dead Effect, which has a moderately-sized development team, a publisher, and a fairly hefty amount of content and production values, the few thousand downloads they’ve attained on iOS in the last six months just wasn’t going to cut it. 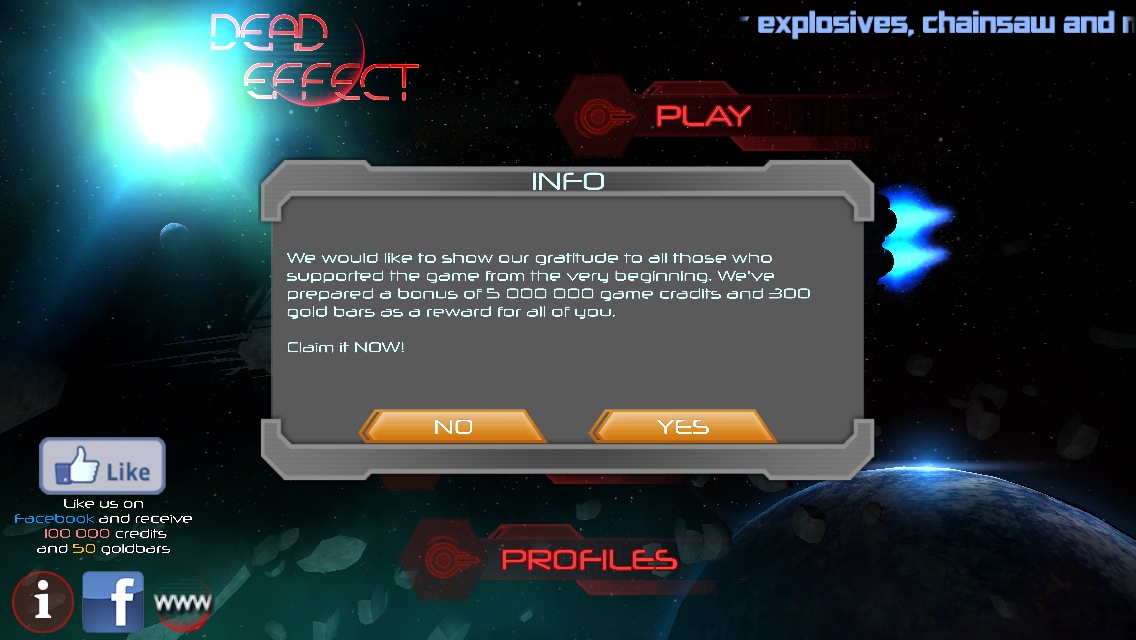 I’m not a fan of having a game changed into something I wasn’t expecting after I’ve bought, played and enjoyed it, but I’m also not a fan of developers going out of business or dropping an awesome project altogether because it’s not making sustainable income. In the case of Dead Effect, the change isn’t really a bad one, unless you absolutely hate anything that’s free to play on principal alone. As I mentioned, previous owners have been given a nice gift of in-game currency, and the freemium model itself is pretty unobtrusive and typical of other free to play games where everything can be earned just by playing. There is a very occasional ad pop-up that I’m not too fond of, and I’d even pay again to be able to disable it, but it’s not that big of a deal. And, the actual update that accompanied this free to play switch has all sorts of great new content in it.

Dead Effect was and still is an excellent mobile first-person shooter. If you have never checked it out before, well, obviously now there’s nothing stopping you as it’s free to download. Hopefully the switch to free will bring its numbers more in line with the Android version so they can continue supporting it.