Our forums have been the place to be for iOS gamers and developers since Arn posted the first thread all the way back on May 20th, 2008. If you’ve never checked them out, you really should. Closely following along with forum discussion is the absolute best way to keep your finger on the pulse of iOS gaming. Want proof? Here’s the Flappy Bird thread, posted well before anyone else really even cared about the game.

Anyway, today we made the most significant change to the TouchArcade Forums since their inception. The iPad games forums are no longer, and instead, everything has been merged into one giant iPhone and iPad Games Forum and a similarly huge Upcoming iPhone and iPad Games Forum. The the iPad forums were originally created along side the announcement of the iPad and iPhone sides of the App Store were two distinctly different markets. With most games and apps being released as universal binaries now, there really isn’t a whole lot of sense in keeping the discussion separate.

To retain some distinction between things that are iPad or iPhone only, we’re using VBulletin’s thread prefix functionality. If games are universal, they’ll have the “Universal:" prefix, and so on. Additionally, if you want to prune out only iPad games, you just need to scroll down to the “Display Options" portion of the forum display, and select whatever thread prefix you want, then hit “Show Threads": 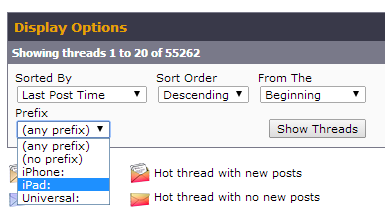 If you notice any weirdness, please feel free to report threads to moderators. The only two issues we’re facing is potential duplicate game threads from games that were posted in both the iPhone and iPad forums as well as a now superfluous “Universal" notation in the thread title. Both things will eventually work themselves out inside of a couple weeks of new threads being posted.

Thanks to all of our forum members and developers who have made the TouchArcade forums such an awesome place!