While searching for an app that would play some sweet 80s ballads for me to slow dance with my best girl to, I happened to stumble on this little gem. Okay, that’s a lie. Air Supply – Infinite ($0.99), which has nothing to do with the Australian soft rock band, came to my attention by way of the awesome members at the TouchArcade forums. It’s getting a lot of love there, and not for nothing. While the game looks quite plain at first glance, it’s a fairly unique spin on the runner genre, and an excellent addition to the discerning portrait mode gamer’s collection.

You play as Spaceman Sam, who encounters a future version of himself while traveling through space one day. Future Sam uges Present Sam to collect eight Infinity Cups to prevent a horrible disaster. Sam’s ship is then shot down, and he lands on a little planetoid, which is where our game starts. While the game is essentially an endless runner, the first unique aspect of it is immediately obvious. The planetoid is quite small, you see, and Sam runs arounds it continuously. Apart from automatically running, Sam can jump and use a screen-clearing bomb, vital tools to survive the horrifying opposition he faces: an alien running around the planetoid in the opposite direction.

Admittedly, this is actually the second runner game I’ve seen using the idea of running endlessly around a circle, so it’s not one-of-a-kind in that respect. Catch-22 ($0.99) also featured this element. There are a lot of things separating the two games, though. If you touch the alien in Air Supply, you won’t get an instant game over, and that’s because the alien isn’t really your nemesis. Rather, it’s your limited supply of air that will be your end if you’re not careful. Sam has a gauge to keep track of his air supply, and it’s constantly going down as you play. Touching the alien will cause you to lose a point of air, and if you run out, you’re done.

Luckily, you can restore your supply in two ways. First, and most frequently, you can grab the falling oxygen bubbles that come from the top of the screen. They fall regularly from different points, but it is possible to miss them, so you have to keep your eye on them. Second, you can fire off a bomb, which, in addition to clearing the screen, will restore your gauge to four points of air. If you have more than four points, it won’t give you anything, though, so you should try to save your bombs until you’re low on air. 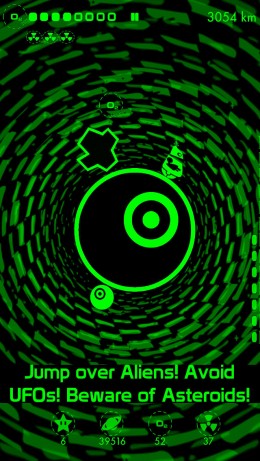 While the game is an endless runner, it does actually have endings. Basically, there are multiple planetoids in the game, which you unlock either by running a set distance or recovering an Infinity Cup. You receive a Cup by running around the planetoid long enough to move through various speed dimensions. If you hit the alien, you’ll be sent back to the previous speed, which is worse than losing a point of air. Anyway, if you make it through all of the speeds, an Infinity Cup will fall from the sky, and you can claim it to move on to the next planetoid and continue your run. Once you recover a Cup from each of the eight planetoids, you’ll be treated to an ending scene. It’s a nice goal to give some purpose to the running.

Dodging the alien isn’t too hard, especially since while he does speed up, if you take him out using a bomb, the next alien will be back to a slower pace. So naturally, there are a few other things going on to complicate matters. Sometimes a UFO will appear above the planet and activate a tractor beam-looking thing that will stop you in place. You can still jump, of course, but the alien will keep moving, so you have to adjust your timing. You also need to watch out for asteroids, which won’t directly harm you, but will reverse the direction of both you and the alien for five seconds. Sometimes both of these will hit at the same time, complicating both avoiding the alien and picking up necessary air and other goodies. 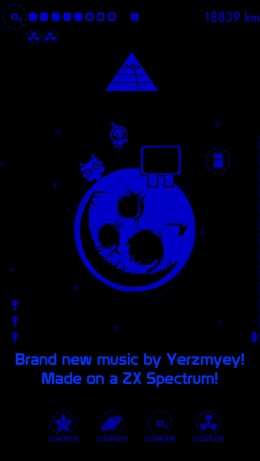 In addition to the oxygen bubbles dropping from the top of the screen, there are a few other things to be collected. Additional bombs will sometimes drop, and I don’t need to explain why those are useful. A shield provides temporary invincibility and is the only way to destroy aliens without using a bomb. You’ll also find a couple of power-ups that interfere with the alien’s movement. The freezer will stop him in place for a short time, while S diamonds will slow him down to his starting speed. Sometimes these power-ups can hinder you if you’re in the zone, but they’re generally pretty useful. Finally, you can also collect stars, which serve the sole purpose of unlocking new characters.

Air Supply – Infinite has a bunch of unlockables. At the bottom of the play area, you’ll see counters for stars, distance, air, and enemies destroyed. When any of the four count down to zero, you’ll unlock a new goodie. Stars unlock characters, distance unlocks new planetoids, air unlocks new music, and destroying enemies unlocks new colors. The unlockables are staggered well enough that you’re always on the verge of unlocking something new. It’s a nice change from the usual bread crumb trail of collecting currency in runners. As the game is completely IAP-free, you’re just going to have to keep playing if you want to unlock it all. Fortunately, you’ll want to keep playing, anyway. 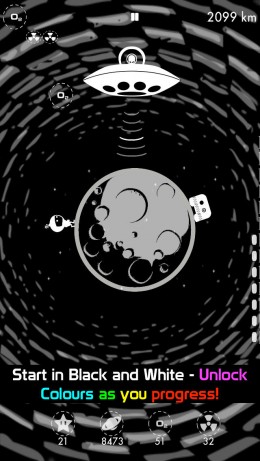 The developer of this game, Quantum Sheep, hails from the UK, and like many UK-developed games with a retro feel, Air Supply has a Sinclair Spectrum feel to its visuals and audio. When I say you can unlock colors, that’s just what you’ll be unlocking: a color choice for your monochrome visuals. You’ll unlock all the best classic colors, but you’ll be starting off in black and white. The graphics may not be fancy, but the game has a good, clean look to it, and everything is easy to make out at a moment’s notice. The animated backgrounds as you progress through the different speeds are dazzling. As for the music, it’s a treat. You’ll unlock a lot of different tunes, and while you probably won’t like all of them, the variety is great enough that you’ll be sure to find a few to love.

There are a variety of achievements and a couple of leaderboards supported via Game Center, which just adds another layer of things to shoot for on top of the unlockables and multiple endings. For what seems on the surface to be such a simple game, there’s a lot to do in Air Supply – Infinite. I love how it’s very forgiving to play thanks to allowing the player to take multiple hits, but very demanding if you want to earn the endings. At the same time, you don’t need to be a skilled player to access all of the content, because it will all eventually unlock through normal play. It hits a really nice sweet spot in terms of challenge such that I think most people can get a lot out of it.

If you’re put off completely by retro themes or runners by now, I wouldn’t blame you, and you might not get as much out of the game as I did. I think this is a pretty solid recommendation for most anyone else, though. If you pick it up, make sure you drop in on the thread in our forum. The developer is incredibly active in there and seems like a real nice fellow. Air Supply – Infinite won’t help you put together your radical 80s jam mixtape, but it’s something of a radical 80s jam all on its own.