Small scaled action RPGs are perfect for the mobile platform. It’s so easy to pick up and go, grab a level here and there, and come back for more. That’s what makes games like Slayin‘ so great, and why the similarly structured LvLn ($0.99) is so addictive.

To be blunt, LvLn is heavily inspired by the smash hit Slayin’ (which in turn was a take on Tiny ARPG), which happens to be one of my favorite mobile games of 2013. The good news is although it uses the same basic concepts, it has its own sense of style and a few unique things to offer. First off, you have complete control over your movement in LvLn, rather than the constant “left or right" speed in Slayin‘. You’ll start off as the plain old Knight, who can run to either side of the screen with his sword out, automatically attacking everything in sight. It’s a lot slower than its prior counterpart for sure, as movement is more deliberate and less arcade-like in nature. 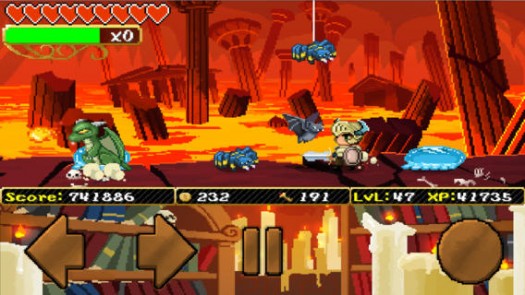 The same control scheme is employed by LvLn, including the giant arrows and one attack button at the bottom of the device. It’s far bigger than it needs to be and blocks a lot of the action on smaller devices, but it’s easy to get used to. Still, full iOS 7 controller support with an option to kick the faux-controller to the curb would be ideal. Visually LvLn uses an endearing art style, and a pretty rockin’ chiptunes soundtrack complete with retro sound effects.

At first, I was kinda underwhelmed by LvLn‘s sluggish pace, but once I started fighting stronger enemies with newer tactics, I came around — especially when you start unlocking the game’s extra characters. As you unlock superior pieces of equipment, more tactics unlock for you in turn, adding a ton of variety to how you approach each foe. It’s not a simple case of upgrading just for the sake of it — you can actually feel the (forgive me) “levelin’."

The main reason I started to really dig it over time is the fact that you get to keep everything after a level — even if you fail. So rather than feel like I’m restarting the same experience every since time, I actually felt like I was constantly getting somewhere. Upon leveling up you’ll have the ability to buy upgrades with gold, including statistical buffs, healing potions, and extra hearts. Thankfully, LvLn isn’t skewed towards slow unlocks for the sake of IAPs. In that sense, it gets better the more you play it. 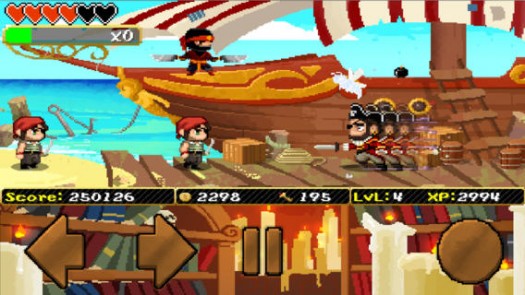 Rather than adopt the style of playing the same set of levels over and over, LvLn offers a narrative progression, including new locales and eight distinct maps to visit. After the completion of each stage you’ll be able to move to the next theme (such as a forest, graveyard, or shore). Like the leveling and character buildup system, it gets better with each new location.

The game does have IAPs in the form of keys that allow early access to content, but they’re not needed to unlock the vast majority of the game. In fact, they’re all strictly “early unlock" options, as normal progression will naturally bring you through every stage. To really run this point home, after roughly over and hour’s worth of play time, I was able to afford nearly anything I wanted to purchase — even the LvLns “top" character. After death you can also revive with the game’s multiple forms of currency (including regular old in-game gold), but it doesn’t feel like it’s more difficult on purpose just to screw you. 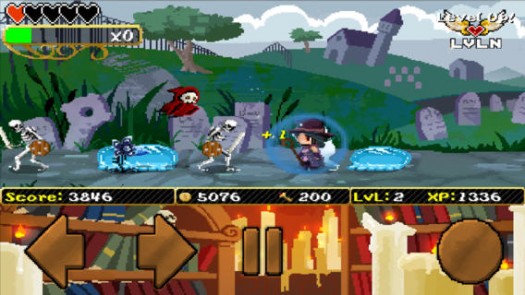 All in all there’s a ton of content to work through, including multiple characters that feel completely different from one another. My personal favorite is the Ninja, who can throw projectiles while in the air, giving him a new vertical dynamic juxtaposed to the horizontal knight. The caster is also equally as fun, as is the final fourth character — hopefully more content is on the way, as the game is ripe for more classes to build (which, by the way, all have their own progression trees).

I wouldn’t call LvLn a clone of Slayin’, because it’s so much more than that. “Inspired" is a far better term, and it’s definitely worth digging deep into the RPG elements to find out why.