There are so many ‘endless’ games constantly being released that it really takes a lot simply to get noticed in the crowded genre. Crescent Moon Games’ Space Chicks (Free), which combines fast-paced platforming with endless elements, has just enough pizazz to accomplish that feat. It also helps that Space Chicks is a blast to play, infusing some life in the tired genre with great visuals and engaging mechanics.

As we mentioned in our preview, Space Chicks is an endless platformer starring a space-age ladies man that traverses across planetoids in search of damsels to rescue. Once a ‘space chick’ is located, you must guide her back to her space ship, where she takes off to safety. Of course, it’s never that simple as a variety of enemies look to end your rescuing ways. Get hit and your rescue gets thrown back onto a planet, typically forcing you to backtrack to save her again. Rescue all the chicks and you move on to the next level (each of which gets progressively harder). Get hit enough times and the game is over and the run ends. Overall, it’s a solid gameplay foundation that doesn’t offer any radical changes. 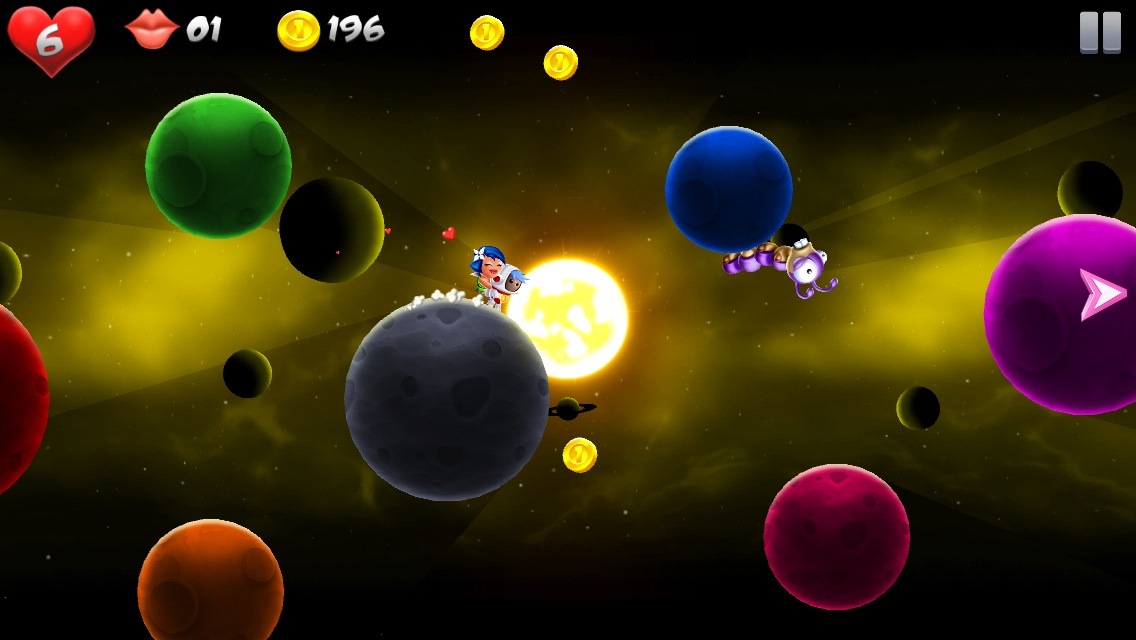 Where Space Chicks does differentiate itself is in its implementation of gameplay elements on top of that foundation. The planetoids are a great alternative to simply running in a straight line which provides added depth in terms of timing and strategy. A gravity system reminiscent of Angry Birds Space ensures that jumping from rock to rock isn’t quite as simple as you’d expect. It also makes for some interesting ways to take out enemies, as you can land on rocks that are easily moved when you jump off them, effectively making them projectiles. I’m also a fan of the game’s later enemies, which include weapon-wielding baddies that are actively aiming for you which add some intense pressure while you’re simultaneously trying to wade through the static obstacles.

Space Chicks is one of those rare examples where every small component of the game comes together to make an experience greater than its parts. Runs have that perfect difficulty progression and offer ample opportunity to collect coins. The in-game store features a combination of skins along with abilities and power-ups that offer different ways to play without being game breaking (there’s also only one currency, meaning everything is accessible with enough playtime). Meanwhile, the overall speed of the game is spot on, offering a fast-paced experience that requires reflexes while not feeling like advancement is based on sheer chance. I’d also be remiss if I didn’t mention the beautiful visuals and infectious music which add a lot to the overall presentation.

However, the multiplayer is what really sets Space Chicks apart from the rest of the pack. Two heroes tackle each level in co-op fashion, collecting coins and saving chicks. While there is inevitably some competition regarding who can collect the most coins and save the most folks, the game ends when one player runs out of lives, making the whole affair co-op in nature. Since the game’s controls exclusively center around one-tap jumping, the game divides the screen into half with each player using their respective side to tap and jump.

Playing on the same device combined with highly accessible controls and fast paced action really leads to a highly entertaining multiplayer experience in Space Chicks. There aren’t a lot of games that can really nail same-screen multiplayer, but I’m pretty impressed with what Space Chicks does. It’s certainly unique, which would make it worth checking out on its own, but it doesn’t hurt that it actually works incredibly well and is a joy to play.

There really isn’t a lot to complain about with Space Chicks. Sure, it would have been nice to have more unlockables, and some added variety in terms of environments and enemies would have been nice, but those are superficial complaints that can be made about most games. The simple fact is Space Chicks is an awesome endless runner with great presentation, highly approachable controls and just enough platforming elements and difficulty to keep players coming back for more. I highly recommend you give it a try.