Maze Crusade (Free) from developer My Evil Twin is something special: A fun and challenging take on the ubiquitous match-3 genre that spurs players on with the same intensity as a game like Knightmare Tower. You play as a knight who navigates a deadly maze full of bloodthirsty foes, dead ends, and a row of moving spikes that destroys everything on the bottom of the screen.

That looming threat pushes you ever upward, so half of winning is just surviving. Swiping up, down, left, and right is all that’s necessary to traverse the maze. Similar to endless runners, Maze Crusade rewards you for simple mileage across its nine themed hedge mazes, which take a while to reach. The rest comes down to strategy: deciding which path to take, how best to manage enemies like gnomes and wolves (their hits slow you down for a few seconds), and what matches to make in the few seconds you have to move or die. 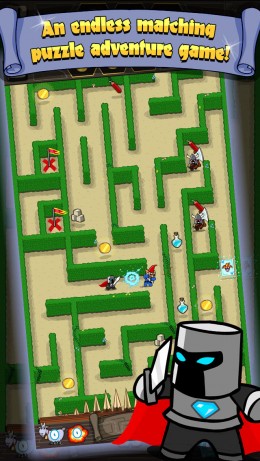 Matching three like items nets a single power-up, with another following for every subsequent match of that kind. So for example, three potion bottles make an invisibility spell, and then every consecutive potion bottle you obtain after that gets you another of that spell.

New power-ups unlock with each increase in level (earned by completing a round of three achievements) and help you overcome the challenges of the maze. Invisibility lets you sneak-attack and bypass enemies, which is invaluable when many of them are afoot at once. Dynamite produces bombs, which enable you to blow through walls and saves you from the punishment of dead ends. And magic dice yield anything from holy grails, which offer a chance to continue upon death, to horses, which temporarily speed you through the level.

These and other unlockables, such as towers — arrow turrets you can place that shoot down enemies — are such brilliant additions that it’s clear a lot of thought went into the overall design.

It can be tough to collect three of the same item in a row, but you’ll need to if you hope to last long enough to find a wooden door hidden in the maze and escape to the next world. What’s nice is that whenever you pick up an item, all others of its type glow so you can more easily find them. And there are shortcuts to using the power-ups: Double-tapping the knight uses an invisibility spell, tapping a wall bombs it, and so on. The pause button is conveniently positioned for easy reach of your thumb, and tapping anywhere stops the knight in his tracks.

However, the swipe controls need some fine-tuning. They’re not always fast enough to follow your split-second directions, and in a match-3 game like this one, where so much of your success depends on nabbing the right item, that’s a huge problem.

But there’s a bigger issue here, underneath everything you will like. Collecting coins earns you currency in the form of goats, which are redeemable for upgrades (longer invisibility, better magic armor) and bonuses at the beginning of each run-through so you’re better prepared. But axe-men, wizards, and ghosts are only a few of the traps waiting in Maze Crusade — the in-app purchases are equally as dangerous.

A Goat Doubler costs $2.99 and does just what you think it would: doubles the number of goats you earn in the maze. There are packs of goats you can buy (herds, bands, and even battalions for as much as $29.99), along with grails and a Squire’s Pack that contains a lot more. Normally I would have no problem ignoring this kind of IAP (and a lot other games have costly upgrades like these), but it takes a lot of goats to get where you’re going. It’s tempting to start spending to make up for the few goats you’re likely to gain in the frenzy of play, when you’re more concerned with stocking up on immediately useful power-ups than lining your pockets.

Especially when those bonuses I mentioned flash at the top of the screen, as if hoping to trick you into a quick tap that wastes those precious goats when you don’t mean to. I can’t imagine a more useless single-use item than the magic horse ride. Who cares how well you do at the start? It’s the performance that follows that matters.

Still, I guess these are minor gripes — Maze Crusade is well worth playing, and it’s plenty unique — but I would have been happier if the developers asked for a single, honest price upfront instead of indulging in its medieval scheme.