I was pretty excited to hear about a new game coming from Eccentricity, the developers of Dive For Treasures ($1.99). In spite of a pretty plain name, the game itself was a unique, relaxing experience. Well, there’s not a lot unique about their new title, Tower Dwellers ($4.99), and I can’t say it’s all that relaxing, but depending on how well you liked Kingdom Rush (Free) and your personal definition of how close is too close, you should have a good time with this one while it lasts.

So yes, straight-up, this game is clearly inspired by Kingdom Rush. No sense beating around the bush there. To be sure, that game didn’t invent tower defense, but everything all the way down to the UI elements in Tower Dwellers feels very much the same as that game. That’s not to say this game doesn’t have a couple of twists to call its own, because it does, but if you didn’t like Kingdom Rush, you can just turn around right now and call it a day, because nothing this game is doing is going to change your mind. Unless, I suppose, your problem with Kingdom Rush was that it offered IAP or that it was too long. Those problems, Tower Dwellers has got your back on. 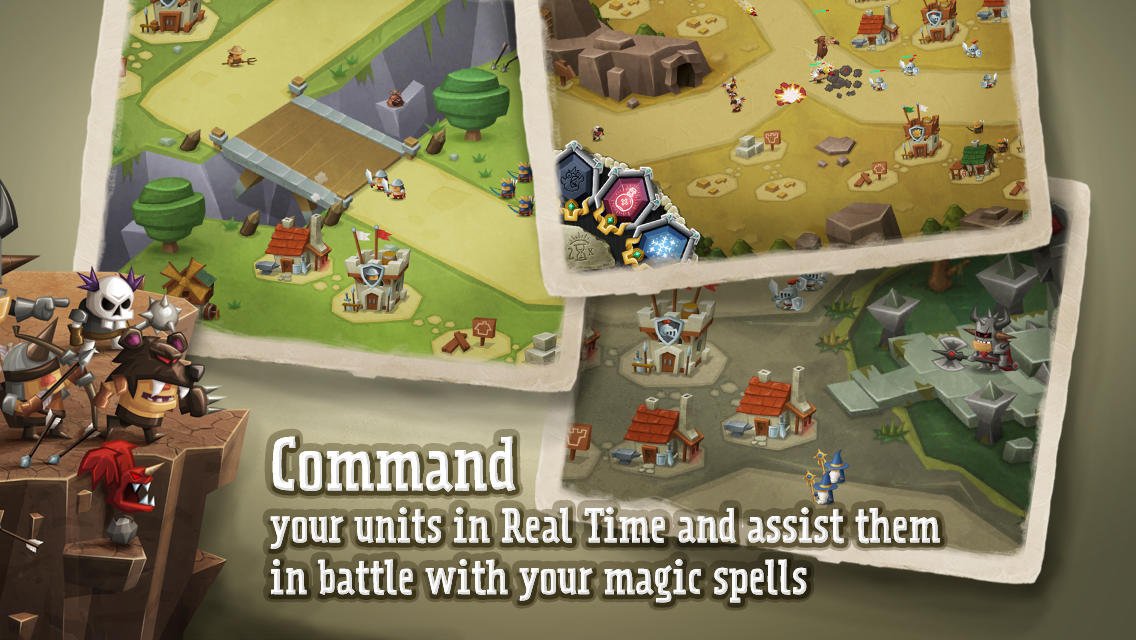 The first thing you’re bound to notice about this game once you’ve gotten past that resemblance is how nice the production values are. You get a nicely-voiced narrator who introduces the story and bridges certain chapters in a humorous style. The graphics are really nice, something you might not notice until you zoom in on the playfield. The character and monster designs look great, and the game has a nice vibrant look to it all around. I’m not terribly surprised by all of this, because Dive For Treasures was great in this regard as well, but it’s nice to see Eccentricity maintaining their standards.

Your quest to earn the freedom of your people will take you through 11 stages, which is perhaps one of the more disappointing aspects of the game. There are three different difficulty levels for each stage, and the highest difficulty lives up to its name and then some, but the length of the game doesn’t compare favorably to the competition. Clearing a stage unlocks new abilities you can power up, and you have some freedom as to the order you tackle them in. This gives you the ability to go and work on another stage to power-up a bit if you’re having trouble with a particular stage. The difficulty of the stages scales fairly well, with later sets of stages possessing more waves of enemies and more entry points for them to come through. Normal difficulty is a good challenge for most, but even playing on easy will allow you the chance to buy some power-ups if you want to gear up for a run on a harder level.

As is usual for this genre, the name of the game is keeping enemies from passing through a marked gate on the map. They’ll start from one end and march their way through, stopping to fight any resistance on the way. Along the roads are designated points where you can build both towers and support structures. The towers will provide one unit per level, up to a total of three. Aside from building units, you can also use one of three special attacks, each with a cool-down timer to prevent spamming to victory. You’ve got a powerful area attack, a healing spell, and a freezing spell that slows the enemy down. Where Tower Dwellers distinguishes itself is with the support structures. By default, towers will produce a weak little farmer, capable of delaying the enemy but easy overwhelmed. By building one of three types of support structures in the space adjacent to the tower, your units are transformed into warriors, wizards, archers, and, most interestingly, combinations of these types. 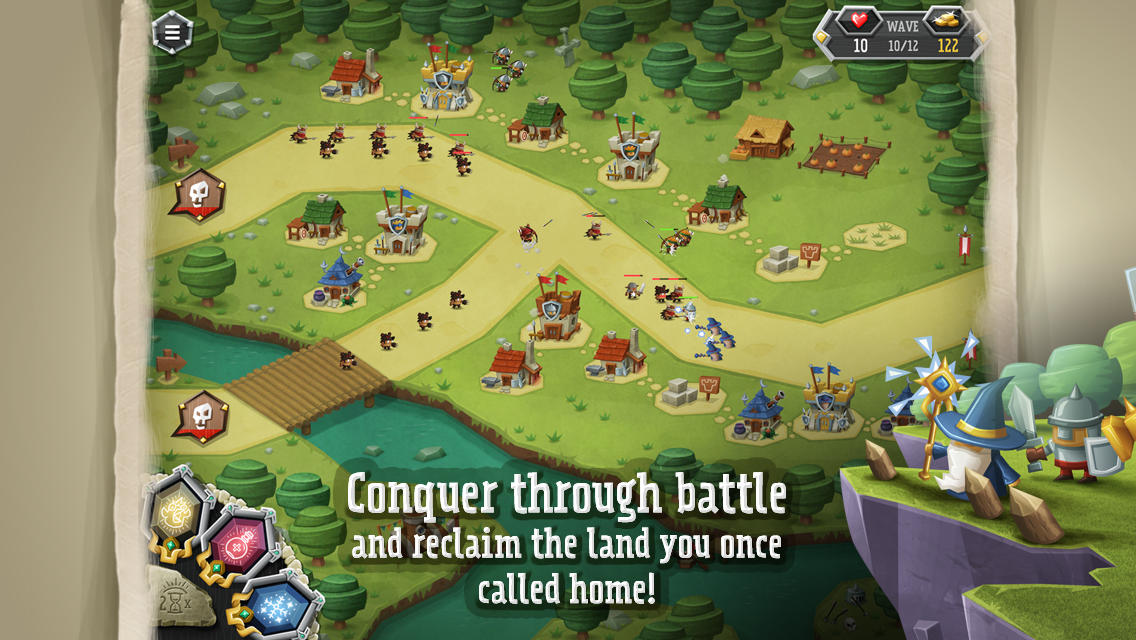 A combination happens when you have more than one support structure beside a tower. If you use all warrior type supports, you get super-strong warriors, but mix in a mage support, and you’ve got some genuine battlemages, and so on. A support structure will modify all adjacent towers, so you’ll want to think carefully about what you place where to make sure you’ve got the right mix of units to survive. Any enemies that slip past you will take down your life by one point, and if you reach zero, you’re done. Maps can get quite long thanks to the large number of enemy waves on some of them, so you’re going to want to avoid losses wherever possible, because starting from the beginning when you were right near the end is awful. When the last wave is cleared, you’ll earn a star ranking based on the difficulty you’re playing the stage on and how many enemies you let through. These stars are used to buy the power-ups, so there’s a nice clear incentive to challenge the higher difficulties.

Defeating enemies earns you gold, which is used to build and level up towers and place support structures. Gold does not carry over from map to map, so feel free to spend it as you get it. There are no IAPs, so if you can’t earn enough gold on your own to keep on top of the enemies, you need to adjust your strategy, not your credit balance. Generally, you’ll have more than enough cash to completely kit out the whole map by the time you’ve reached the later waves. Survival is far more of an issue than having enough cash. The game is billed as micro-management meets tower defense, and it’s truth in advertising. You can position your units anywhere within a certain radius of their tower, and even individually target enemy units. At the lower difficulty and stages, you won’t have to do much, but as you work your way through, you’re going to need to take advantage of these capabilities.

If you’re finding things overwhelming and want to practice against a certain wave of enemies, but don’t want to have to play through all the earlier waves just to get there, Tower Dwellers has you covered with its sandbox mode. You can set up a scenario as you like and have a go at it. It’s not really enough to extend the game once you’ve finished the main quest, but it’s very useful for practicing. The developer has mentioned an endless mode is on the way, something that I think will go a long way towards alleviating the brevity of the game.

In the end, Tower Dwellers never really escapes the shadow of its inspiration, which is a particular problem when said inspiration is cheaper and more lengthy. I’d be hard-pressed to recommend this over Kingdom Rush or its sequel, but if you’ve already picked those up, run through them, and are thirsty for more, this game is an excellent variant. The added layers of micro-management and building combinations aren’t revolutions, but they do help make Tower Dwellers a more hectic and challenging experience than you might be used to in this genre.