Just over a couple of months ago in late August, Pixbits released Junk Jack X ($4.99), their ambitious follow-up title to their 2011 hit 2D crafting adventure Junk Jack. Junk Jack X followed the formula of its predecessor very closely, but expanded on it in many different ways. New worlds to explore, new items to craft, a streamlined interface and a very enjoyable online multiplayer component. Junk Jack X was about as good as they come, and as fans of the first game are all too aware, Pixbits are no slouches when it comes to updating their games with new features. The first Junk Jack X update landed in mid-September and addressed issues of online griefing among numerous other fixes. The next update is already submitted to Apple for approval, and as you can see from the screen below, is a holiday-themed update featuring a bunch of stuff for Thanksgiving. 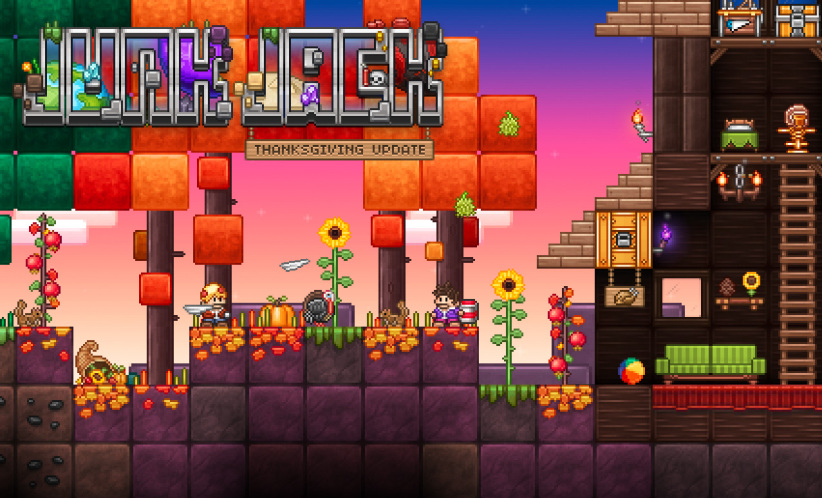 The actual update log on Pixbits website is long, and I mean finger-cramps-from-scrolling-too-much long, so if you’re interested in all the nitty gritty details about this forthcoming update it’s probably best to visit their site and check out the change log over there. However, some highlights of the update include: new rare Thanksgiving loot, a turkey and a squirrel for new mobs, the ability to throw spawner eggs in Creative mode if you feel like having mobs around in that normally peaceful mode, lots of new craftable items and weapons, a Hardcore difficulty setting that features permadeath of your character (yikes!), more than 100 new achievements and so, so, so much more. If you’ve been enjoying Junk Jack X since its release then get ready to enjoy it even more as this latest Thanksgiving update is in Apple’s hands and should hit at any time.