I admit, I was pretty surprised when I heard that the folks at Nimblebit were going to join forces with Disney Interactive to create a Star Wars game. Yet, after a few soft launches here we are with Star Wars: Tiny Death Star (Free), a title that combines the simplicity and adorable visuals of Tiny Tower, with the rich assets of Star Wars. The combination of both should be a match made in heaven, but a stingy premium currency economy may make some think twice about investing in this otherwise great fan service tribute.

If you’ve not had the pleasure of playing Tiny Tower (Free), I highly suggest you check out our 2011 review that discusses the game’s time management gameplay. Overall, Tiny Death Star doesn’t deviate too much from its predecessor’s gameplay. The crux of the game still revolves around building floors in a tower-like structure, stocking items that provide ‘Credits’, and ferrying Star Wars themed bitizens that award Credits and ‘Imperial Bux’ (the game’s premium currency). It all amounts to a game centered around timer management with additional, small rewards thrown in for interacting with the game via elevator trips and matching bitizens to their dream jobs. The gameplay was simple enough to be highly approachable and inviting in Tiny Tower, and Tiny Death Star continues that trend. 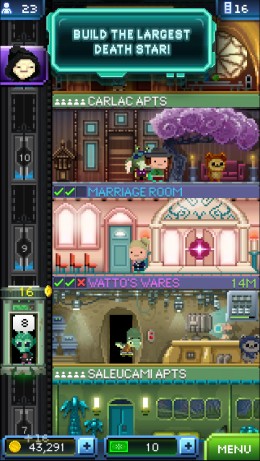 Despite the above, Tiny Death Star does implement a few new additions that add to the otherwise static gameplay. In addition to awarding credits for ferrying bitizens to their desired floor, each delivery knocks a minute off the floor’s restock (or building) timer. It’s a small, but appreciated change. In addition, the debut of ‘Imperial’ floors along with quests provide additional diversions to earn additional Credits while saving up money for adding floors and moving in bitizens. I also appreciated the larger variety of VIPs, which do everything from instantly filling out a residence to allowing you to move floors without the requisite bux charge.

Unfortunately not all the changes in Tiny Death Star are appreciated, or even welcome. The loss of a random bux award for ferrying citizens or fully stocking floors significantly reduces the ability to earn that premium currency. In addition, the game’s ‘Find Events’ (which are a throwback to Tiny Tower and reward bux for completing them) are also a far rarer occurrence. The same goes with the majority of VIP events, with the exception of the supply officer which works hand-in-hand with the new Imperial floors. Why is this important? Well, bux are still important for quick-filling residences when you have a lot of floors and are the only way to upgrade your elevator.  Long story short, earning bux in Tiny Death Star is a far more onerous experience and the fact that they cost much more to purchase via IAP than Tiny Tower also hurts.

Despite the above issues, I keep coming back to Tiny Death Star simply because of its excellent fan service.  The pixel art is masterfully done and does a great job recreating the Star Wars universe in the Nimblebit art style. Each floor has animated backdrops that really give the game far more life than Tiny Tower. In addition, Tiny Death Star offers loads of characters and heroes from the Star Wars universe and even provides small encyclopedic entries on each one with useful information. Even the game’s cutscenes, which occur randomly and offer no monetary rewards, are just yet another nice touch to the overall game. It’s obvious that when it comes to art and content, Tiny Death Star was made with great love for the Star Wars universe.

Still, the changes to the freemium experience are hard to ignore. In the case of Tiny Death Star, it simply becomes a question as to whether the immense amount of Star Wars fan service outweighs the somewhat harsher freemium experience. As a Star Wars fan it’s no question for me that Tiny Death Star is worth playing despite the added heartache. However, I fully understand that for others, it may be closer to a toss-up as to whether it’s worth the time investment.