Rayman Jungle Run ($2.99) turned a lot of heads when it hit the App Store, and it’s not hard to see why. The graphics were gorgeous, the music was infectious, the controls felt good, and the challenge offered something for players of all skill levels. It took console big brother Rayman Origins and distilled it down into its purest gaming form. So how do you follow that up? With a powerful extra helping of the same, it seems. Rayman Fiesta Run ($2.99) isn’t doing a whole lot different from its predecessor, but when it’s this good, it’s hard to complain.

The story seems to loosely mirror that of the console title Rayman Legends, because you’re rescuing Teensies this time instead of Lums, but it’s hard to tell because the game doesn’t really concern itself with a story. All you need to know is that you have to rescue Teensies to open up levels, and to rescue Teensies, you have to run through each stage, trying to collect all of the Lums. Every so often, you’ll unlock a new character or a new power, but the goal remains the same: collect Lums, free Teensies, unlock new stages, rinse and repeat. 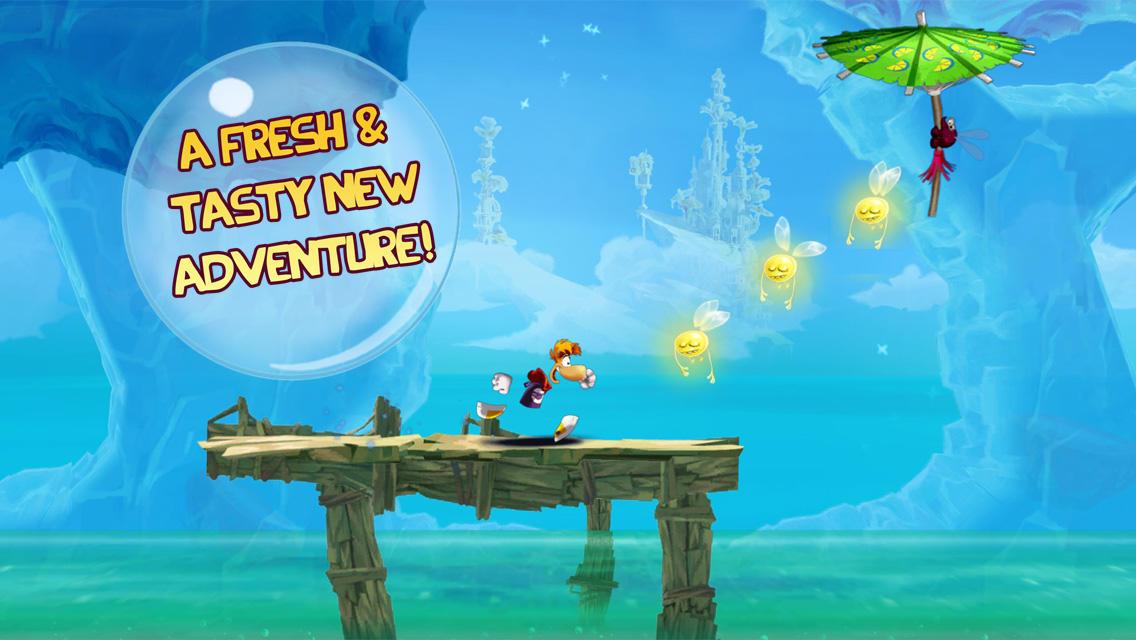 The most noticeable change is that this game is somehow even more beautiful. Jungle Run was no slouch in that department, with crisp, colorful, high resolution graphics, but Fiesta Run brings things to a whole new level. The environments have a lot more detail to them, with extensive use of transparencies, layers, and lighting effects. The theme of the visuals helps differentiate the game, as well. One cannot fault Jungle Run for having so many jungle levels, it is the title of the game, after all, but Fiesta Run goes right for the abstract and it’s more interesting for it.

The system of progression is a bit different, too. Instead of having to beat a level to unlock the following one, the levels here are laid out on a map with nodes. Each rescued Teensie unlocks one node, with new levels opening up every few spaces. I like this system because if it happens that you’re really stuck on a level, you can still progress by going back and mastering previous levels. It’s a bit more flexible for the player, which is always a good thing. Of course, if you want to unlock every level, you’re going to need to clear everything completely, so don’t think the game is going any easier on you. 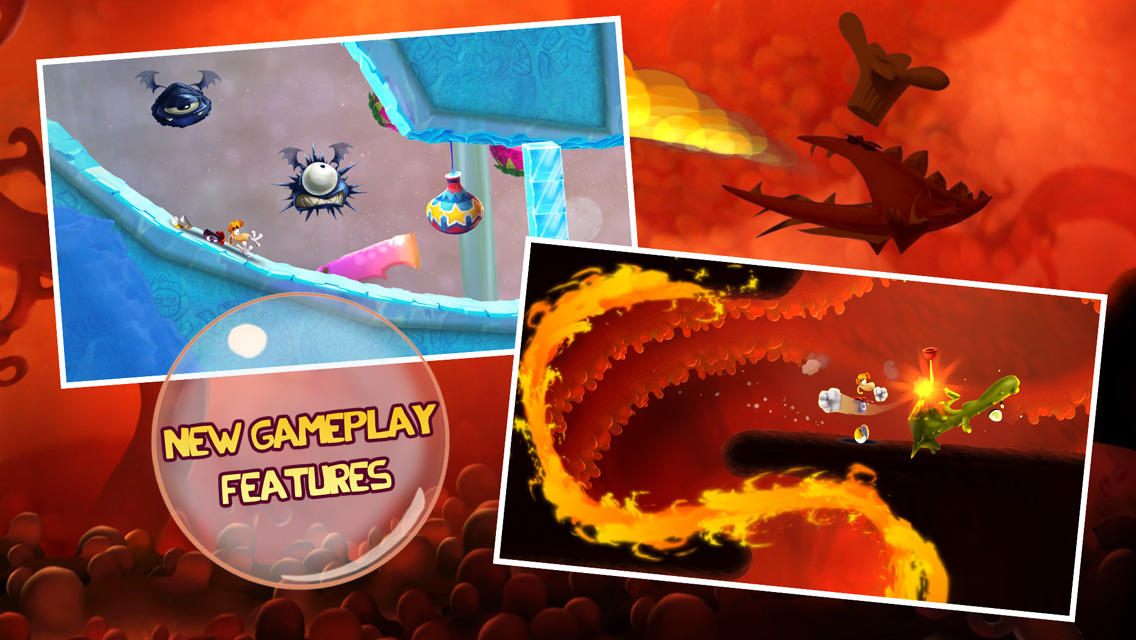 One of the major new additions for this sequel is optional power-ups. Unlike Jungle Run, there are no hearts to be found in the stages of this game, so you’re always going to be a one-hit wonder by default. However, at the start of each stage, you are presented with a selection of one-use power-ups that you can buy using your collected Lums. The selection varies from stage to stage, with some stages offering only the guide power-up that gives you a line to follow and cues for what action to take. The other power-ups include hearts that allow you to take one or two hits and a ranged attack that lets you take out enemies and smashable walls at a distance. I find the latter power-up is often more of a hindrance than a help, because the game usually gives you that power-up in stages where you need it, while in other stages it will often lead to accidentally breaking something too early or killing off an important stepping stone.

This again seems to be a change aimed at opening the game up for less hardcore players. What I don’t like is that the choice of power-ups popping up every time adds an extra layer to restart attempts. I know it’s only a half-second and it’s kind of a silly complaint, but with this type of game, I like my restarts like I hate my coffee: instant. Still, it’s a good thing for many players. Lums are plentiful and you can re-run stages to earn more, so you don’t have to feel guilty about making use of the power-ups if you need them. As far as I can tell, the game doesn’t mark whether or not you cleared a stage using power-ups, so go wild, if you like. 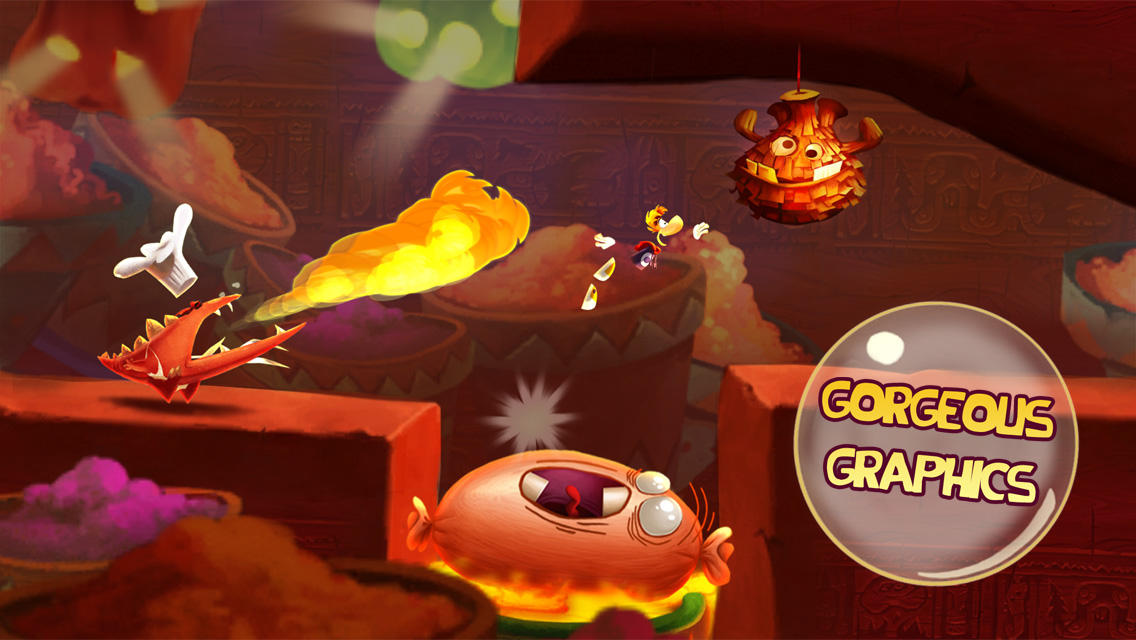 The presence of this new system to alleviate issues with getting stuck seems to have emboldened the level designers a bit, because the game is quite a bit more difficult than Jungle Run, particularly if you’re running without power-ups. Oh, the normal versions of each stage aren’t too bad, though getting all 100 Lums in some of them can be tricky, but once you’ve perfected the stage, a new version of the stage appears. Called “Invaded", these stages remix the level with new obstacles and enemies, with the layouts sometimes changed so extensively they might as well be new levels entirely. Perfecting these stages is a pretty tough challenge, but again, you’ll have to if you want to unlock the last few extra levels. I really had a great time with these levels. They’re frustrating in the right way, for the most part.

The inclusion of these remixed levels brings the count up to a very respectable 76 stages, which is more than the last game had even after having a number of stages added to it. At first, I thought the Invaded stages would be a cheat to inflate the level count, but they’re such different beasts from the regular stages, I think it’s pretty fair to count them as separate. With any luck, we’ll see more stages added from Ubisoft in the same manner as before, but even if this is it, you’ll assuredly get your money’s worth out of Fiesta Run. 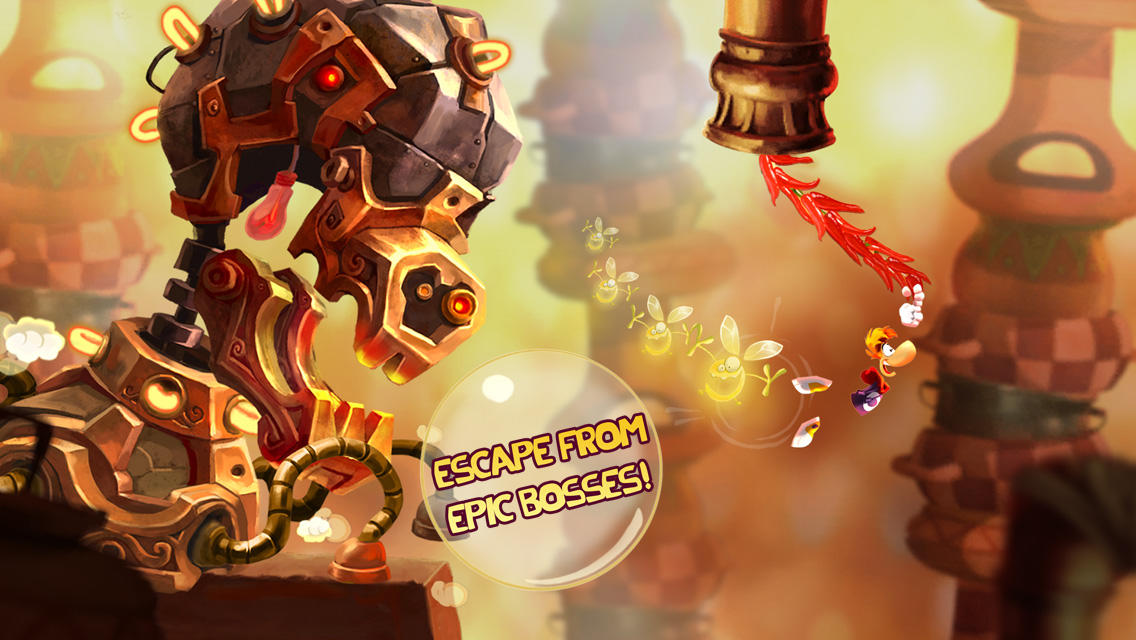 Speaking of getting your money’s worth, in the last game, Rayman’s buddy Globox was an IAP that came with a couple of alternate costumes for Rayman and cost a buck. He’s just a cosmetic change, in spite of his apparent size difference, so I have a feeling that came a bit steep for some players. Well, worry not, because not only can you unlock Globox and the same two Rayman alts in this game using your collected Lums, you can also unlock a couple of playable Teensies and a Globox alt. The price for them is quite reasonable, especially if you still have Jungle Run installed on your device and collect the bonus Lums for having played it. The only IAP in this game is the option to purchase more Lums, something I can’t imagine anyone would actually need to do.

In terms of gameplay, there’s not a lot new here. Rayman still has essentially the same set of moves, unlocked in the same order. He can punch, glide, and wall run in addition to his basic running and jumping abilities. The app description touts swimming, sliding, and shrinking as new actions, but swimming and sliding both function the same as running for the most part and the shrinking is just a level gimmick that has no actual effect on gameplay. Most of the new experiences in the game come from how the levels play out, with a lot more stage destruction and alteration forcing you to think on your feet. It would have been nice to see some new abilities, but I appreciate that nothing was shoehorned in simply to have something new for the sequel. I’ll give this one a pass on the “if it’s not broken, don’t fix it" principle, but I do hope if they go for a third installment that they come up with some new things to do.

The last thing I’ll touch on is something that has been a point of controversy in our forums, comments, and elsewhere. There are some ads that will pop up from time to time during the game for other Ubisoft apps. They’re the full-screen type that you need to close off manually and how often they appear seems to vary from region to region. I only encountered a single ad for Might & Magic: Clash of Heroes ($4.99) during my whole time with the game, but some people have been seeing them a lot more frequently than that. I don’t think there’s anything wrong with using inobstrusive ads for your other products, even in a paid app, but these are not what I would call inobstrusive. Again, I only ran into one of these ads once in several hours of play, but you should be aware that they are there.

Other than that little snag, Rayman Fiesta Run is just about everything you’d want from a sequel. It’s bigger, looks better, offers more value for your money all around, and turns up the challenge in a very thoughtful way. The original game was one of those great experiences where I finished it and was still very hungry for more, and here it is. Unless you despise auto-runners, occasional in-game ads, or fun, this fiesta is not to be missed.