Given the rather obvious angle of the art direction and marketing for this title, you’ll have to forgive me for having been skeptical of Spirit Stones (Free). With top-heavy, scantily-clad women all over the place, it almost appears to be trying to make up for something. What that something might be is still not apparent to me, because this game is a surprisingly good mash-up of Puzzle & Dragons (Free)-style puzzle-RPGing and mobile TCGs. The juvenile character art and evolve-to-strip stuff are not only unnecessary, they’re actually a negative point on a pretty good game.

Spirit Stones is a free-to-play game more than a little bit inspired by Puzzle & Dragons. You assemble a team from randomly-drawn character cards and tackle quests made up of mini-battles which are fought by playing a variation on a match-3 puzzle. Along the way, enemies will randomly drop treasure, and if you beat all the battles in a quest, you get to keep everything you’ve found. If you fail, you lose it all. You can use any extra cards you happen to pull to strengthen your main group or evolve them into new forms using coins earned from defeating foes. The nuts and bolts of the game are certainly nothing unusual. 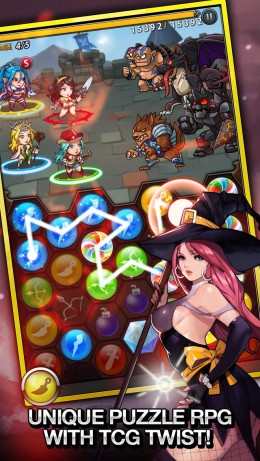 Most of your stock of characters is going to be made up of lovely ladies, though there are a few token gents and some beasts to mix things up a little bit. If you collect two of the same card, they can be fused to create a stronger form, with its own modified artwork. Typically, the animals change color, the men gain more armor, and the women lose more clothes. Cards can be obtained a number of ways. The most common way you’ll receive them is as drops during gameplay. The cards you receive this way seem to be fixed, with particular cards dropping on each stage, and always only once. You can also draw a random “silver" card each day for free, exchange hearts for one earned by adding friends or participating in large-scale battles, or buy one using coins. “Gold" cards, which contain the rarest characters, can only be obtained by exchanging a Random Box occasionally found on boss stages or by using gems, the premium currency of this game.

The meat of the game is in the single-player mode where you play through a very loose story by completing quests. Your party in this mode is limited to four members, and since there are four different groups of characters and four different colors of stones, you have to choose whether to double up on one type of attack at the risk of leaving out another. Like Puzzle & Dragons, if you don’t have a character with you that uses that element, making matches with the corresponding type of stone will do no damage. Some bosses take extra damage from particular types of attacks, so it’s worth considering a team tilted towards their weakness. More powerful characters can unleash special attacks after certain conditions are met, but generally, a character’s usefulness corresponds very closely to how high their attack and HP are. 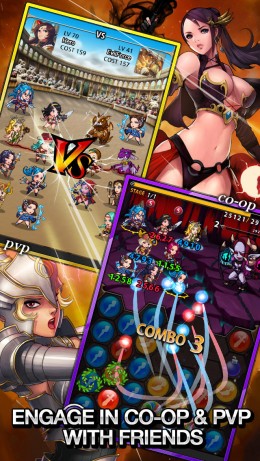 As mentioned, the actual puzzle gameplay is a variation on match-3. Four different colors of stones fill the field and you have to match three or more of the same color to make an attack with characters of that same color. Special bonus items will sometimes appear, dependent on which types of characters you have in your party. A bomb will detonate all the stones around it, a sword will make a diagonal cut across the field, a bow will launch arrows at random stones, and the potion will restore some health. You can use these items to create combos and even chain them together for some pretty huge attacks.

You can’t push stones around the way you can in Puzzle & Dragons, so you’re a little bit more at the mercy of luck, but part of the strategy comes with trying to make attacks in a way that sets you up for your next strike. You can choose which of the enemy to target first, and this is also pretty important if you want to survive. As you progress through the game, more special types of stones will appear, some helpful, others harmful, but the core mechanic remains engaging. It’s one of the things that makes Puzzle & Dragons as fun as it is while imitators like Pictlogica Final Fantasy (Free) falter, and Spirit Stones nails it.

Another thing it nails is in how generous it is. The difficulty slope is extremely fair, and I haven’t hit a point yet in several hours of play where my available characters couldn’t possibly win. You’re given tons of opportunities to get new cards, even occasionally getting an item to give you a pull at the best cards. The premium currency comes very, very slowly, but virtually everything the premium currency does can be done in other ways, and with a reasonable expenditure of time. Even super-rare cards can be bootstrapped up to using common cards and evolution. The only major thing you can’t buy without gems is the ability to continue, but I haven’t really had to at this point. While in Puzzle & Dragons drops are random to an extent and limitless, here the drops are easily obtained and quite limited, so it never felt like I was losing out on anything serious by not continuing.

There is, of course, a stamina gauge, and you expend some of it every time you enter a battle, but here again I found it pretty generous. A full stamina gauge is always good for about six or so quests, level ups restore it completely, and it replenishes at a pretty quick rate. You can also refill it using an item that is rewarded occasionally for killing bosses. You also have a separate stamina gauge for battles against other players or tackling the Hellgate, giving you a few other activities to engage in should you exhaust your main stamina. Battles against other players are kind of disappointing, as they just match your team against the other player’s, with the outcome determined by sheer numbers with no puzzle gameplay involved. The Hellgate contains extremely powerful monsters that you can work with other players to take down for various rewards.

Friends can be made in-game by entering a friend code or by randomly encountering people during the quests. You can, once per day, pull a friend’s party into a boss fight in place of one of your own team members, and by doing so, your friend will receive some hearts that can be exchanged for cards. Since party leaders are usually very powerful, this is a good way to quickly wreck a boss if you’re having trouble. Naturally, if your friends make use of your party leader, you’ll also receive hearts.

It’s just too bad about the presentation. There’s a really good game here, if you’re into stuff like Puzzle & Dragons, but I suspect the T&A might have turned off a bunch of people here at TA. I know sex sells, but it’s kind of an embarrassing thing to have running on your phone if anyone happens to look, and I imagine it’s at least a little bit off-putting for female gamers who might otherwise be interested in this game. The actual quality of the card art is great, I’d just prefer if I didn’t feel like I was playing Puzzle & Strippers. The battle graphics feature super-deformed versions of the characters, and it’s kind of amusing to see how the proportions work out.

If you can look past the art, or better yet, appreciate it, you’ll find a pretty fun game here. Yes, it’s free to play, it has stamina gauges, cards, and all other sorts of warning signals. I certainly came in with pretty low expectations. I was pleasantly surprised to find that this is actually one of the better Puzzle & Dragons-inspired games I’ve played. It does most of the same things right and adds a few interesting wrinkles of its own. Tit for tat, Spirit Stones isn’t quite the same level of quality, but it’s certainly good enough and different enough to merit trying out.