Have you ever played a game that had particularly boring levels, but kick ass boss fights? What if you could just have a game where you fought boss after boss, ignoring all the goons along the way?

That’s the driving concept behind Infinity Danger (Free). You get into a boss fight, get out, and move onto the next one without all the fluff in the middle. Surprisingly, it works.

Infinity Danger is an homage to an incredibly popular freeware shoot ’em up (shmup) called Warning Forever. Billed as a gauntlet of boss fights, you simply tackled foe after foe until you died, with increasingly stronger enemies as you went on. It also has a speedrunning element to it, in the sense that death takes precious seconds off the clock (whereas defeating an enemy adds time), so it’s in your best interest to play it as cautiously as possible. In the end, score attack junkies are going to have the most fun with it, attempting to best their previous run time and time again. 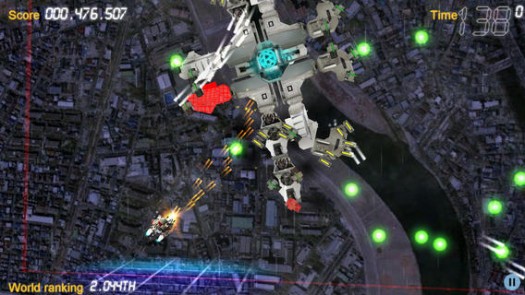 That’s the basic gist of Infinity — kill or be killed, one on one combat. At first, you might be confused as you boot up the game and get thrown straight into the thick of things — but it’s this original take that makes it unique. Instead of fighting through lengthy scrolling levels, you’re just going to duke it out arena style against giant flying fortresses, with randomized armor pieces, gun placements, and cores. Your job is to take down an enemy core (a giant blue pulsing cube) as fast as possible, while mitigating your own damage.

While you’re playing, enemy ships will start to increase in difficulty, and adapt to your style. It helps keep things interesting, as you’re constantly having to adapt and learn new tactics to beat a series of bosses in a crescendo style. It works basically by figuring out whether or not you’re playing it defensively or offensively, and changes its movement and aggressiveness accordingly. So if you’re turtling (being overly defensive) a lot and taking your time, it’ll try to get more offensive to force you to change.

Think of it as an RPG with a scaling difficulty level, but a bit more streamlined and stronger by design. In terms of the style of shoot ’em up I wouldn’t exactly say the game is “bullet hell" (where the screen completely fills with bullets), at least compared to some other games in the genre — but make no mistake, there are going to be tons of projectiles flying around that require your immediate attention. Having said that, that’s all you’re going to be doing, over and over — fighting bosses. Although the enemy models do change every time, eventually you’ll get a feeling of déjà vu, and feel like putting the game down for a while. 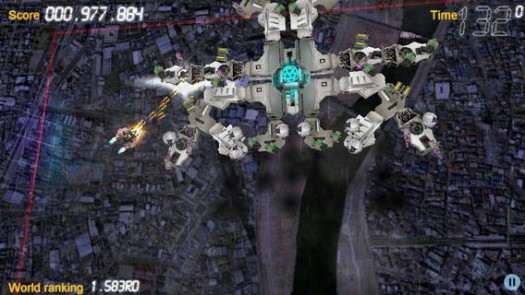 Control-wise I don’t have many complaints at all with Infinity, as you simply tap one side of the screen to fly and another side to change the direction of your cannons. It’s technically controlled by way of two virtual analog sticks, which may not be as ideal as tactile feedback, but I was able to get my ship where it needed to be on a regular basis. It does take a little while to get used to the seemingly sluggish handling, but it’s something that can easily be picked up and mastered.

Given the randomization element of enemy ships, you could theoretically play this forever, if you can stomach the same engine over and over. Truth be told the repetition could be alleviated a bit with new ship options, new modes, and new enemy themes, as the same “grey on white" designs can get stale after a while. There have been reports of crashes on devices that span the pre-iPhone 5 generation, but after a recent update the game has been completely stable for me.

If the concept of simply fighting enemies over and over without any interruption whatsoever, Infinity Danger may not be for you. But if you’re a shmup addict, there’s plenty here to test your mettle, and keep you interested for quite some time. Or at the very least, a perfect excuse to bust out your device and hone your skills.