When Anomaly Warzone Earth ($3.99) hit back in 2011, its ‘tower offense’ gameplay was pretty novel and made for a highly enjoyable experience. Fast forward to today, and games still haven’t quite  hit on what made Warzone (and it’s half sequel, Anomaly Korea ($3.99)) such a success. With Anomaly 2 ($4.99), 11 Bit Studios have raised the bar, with an impressive array of improvements and a new multiplayer mode I love.

From a gameplay perspective, Anomaly 2 plays very similarly to the other two Anomaly titles that have hit iOS. Each level still charges players with guiding a caravan of weapon wielding vehicles through maps filled to the brim with a variety of enemy towers. Power-ups, such as repair zones and decoys make a return as necessary items that must be employed strategically in order to survive the mission. The game’s currency and vehicle purchasing/upgrade system should also be familiar to series fans. 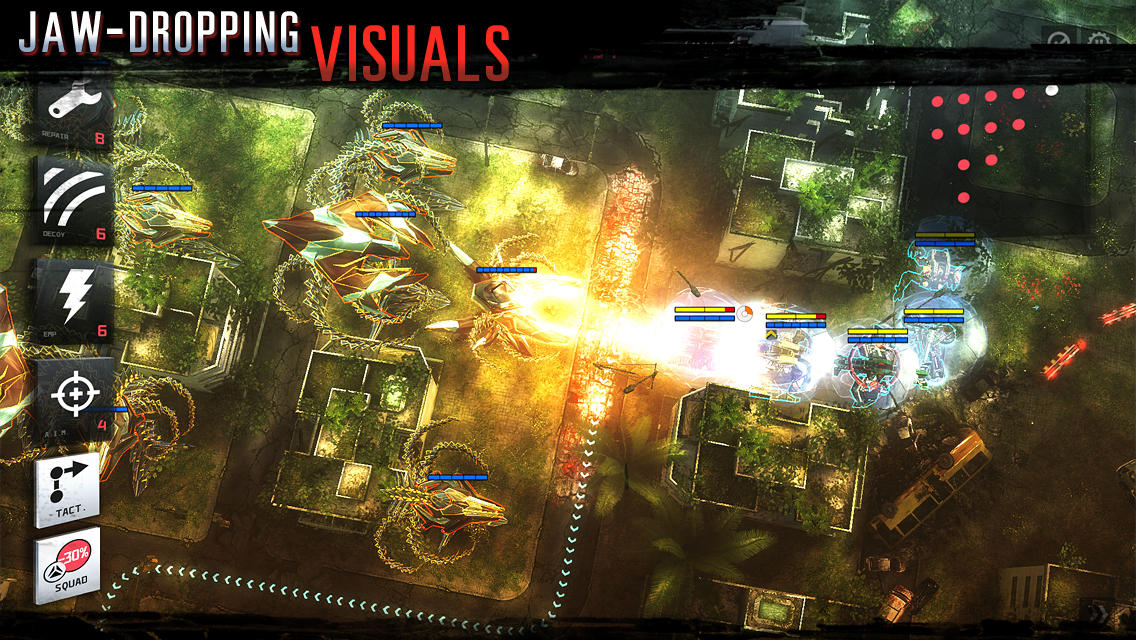 However, Anomaly 2 does mix it up a bit in terms of new vehicles, new power-ups and new gameplay options. The new gameplay facets center around the fact that each mobile unit can now ‘morph’ into a different unit. For example, the long-ranged Assault Hound can morph into the close-quartered Hell Hound, swapping long distance guns for more armor and short-ranged flamethrowers which can attack multiple enemies. Every unit has a secondary mode it can morph into, granting significantly different attributes that are useful for certain situations.

While Anomaly has always been about choosing the right vehicle for the right situation, the addition of morphing units in Anomaly 2 almost brings an element of reflex gameplay to the otherwise heavily strategic gameplay. With the addition of morphing units, each level throws a lot more variety in terms of enemy towers which forces players to not only scan ahead on their routes but to continually morph units to maximize the likelihood of combat success. Anomaly 2 also encourages players to do a lot more buying and selling of units mid-mission as well as unit placement within the convoy. None of these aspects really overhaul the core gameplay but it certainly refines it and provides more interaction. 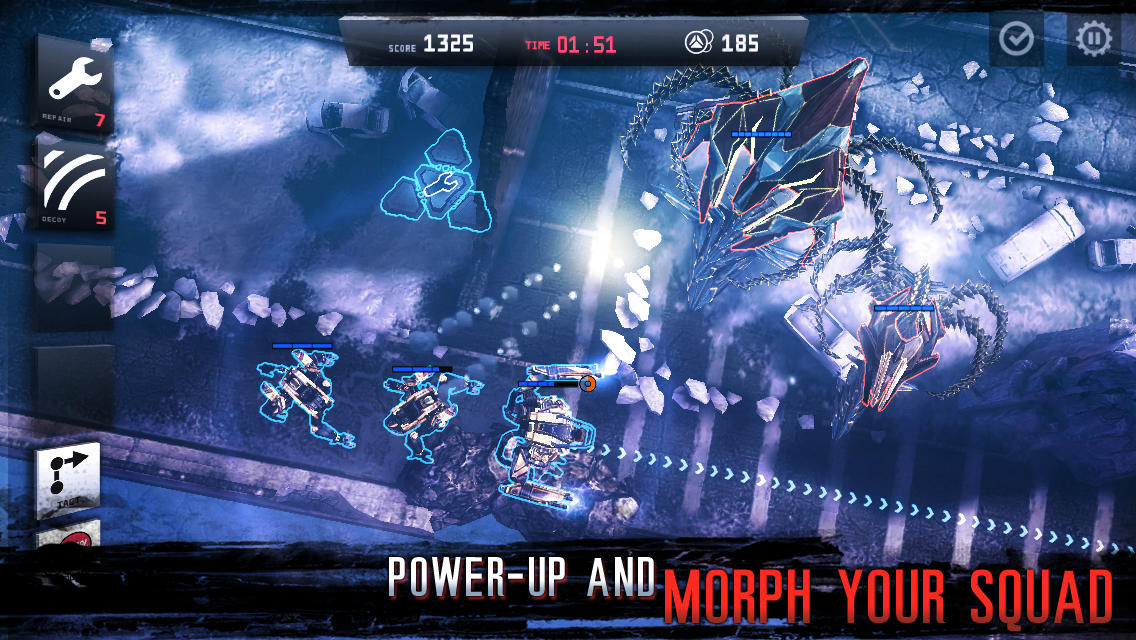 Hands-down, Anomaly 2 is one of the most gorgeous games that I’ve played so far on iOS. The visuals are incredibly detailed and the game runs incredibly smooth on current generation devices. There is an occasional tendency for ports hitting iOS to take a hit visually, but Anomaly 2 pulls no punches and provides a graphical experience that matches the original PC release. True, the game’s demands are a drain on battery life, and older devices have had experiences running the game well (or even running it at all), but I think the great strides made with current devices outweigh some of the pratfalls seen on older ones.

While new gameplay additions and an impressive visual overhaul would be more than enough to make a good sequel, Anomaly 2’s addition of competitive multiplayer really sets it apart. Players have the option of being either the machines (i.e. the towers) or the humans in a crazy battle of tower defense versus offense. Gameplay for players on offense is pretty similar to the single player campaign while taking the role of defense is a completely different experience. Multiplayer matches are engaging and deep enough that there are a variety of different strategies that can be employed. 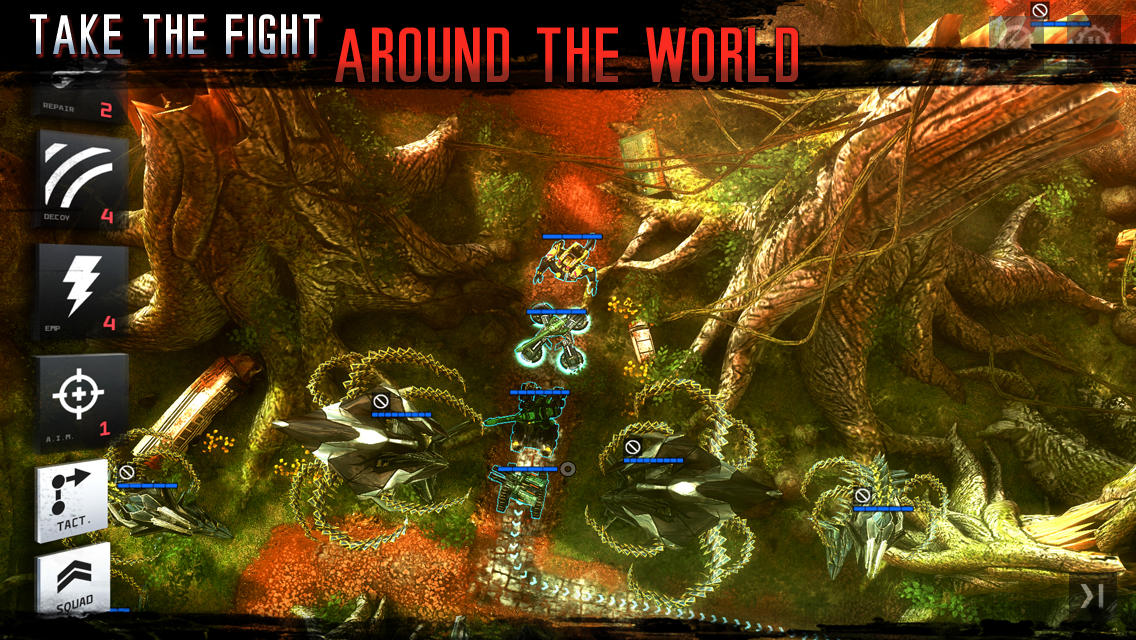 Additional facets such as the addition of abilities which can be bought to upgrade your units and a novel points system for determining the winner also add to an already great multiplayer experience. In fact I’d argue that, while the game’s campaign is quite enjoyable, the new multiplayer mode is truly the star of the title. Finally, a decent multiplayer tutorial does a good job explaining how to play both sides.

Simply put, Anomaly 2 is everything Anomaly fans could have ever wanted in a true sequel. The gameplay additions, impressive graphics and competitive multiplayer improve on nearly every facet of the original (and psuedo-sequel Korea, for that matter). Anomaly Warzone Earth was a game of the year candidate when it came out in 2011, and Anomaly 2 should be on that short list for this year as well.