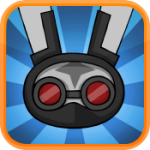 This little ninja was so stealthy, he almost slipped right past me unnoticed. When Ninjin (Free) first popped up on the App Store, I briefly looked at it, chuckled at the title, and dismissed it. Later, I noticed the game was getting some love in our forums, so I decided to give it a proper go, and boy, am I glad that I did. The core gameplay of Ninjin is fast-paced and fun, and it’s packed with a lot of content for its price.

I should let you guys know up front that what you get for free with Ninjin is not the full game. It’s more like a shareware version, with the rest of the game unlockable via IAP for $0.99. You can get an excellent feel for the game with what’s in the free version, and rest assured, you’ll get your money’s worth should you choose to buy the full game. There are no other IAPs besides that one, so if you are the type of player that dislikes bad IAP, don’t worry.

Anyway, on to the review proper. Ninjin tells the story of a clan of ninja rabbits whose carrots have been stolen by the evil Shogun Moe. Your mission is to retrieve the carrots at all costs and make Shogun Moe pay for messing with your clan. The story is told through wordless animated cutscenes that play out between levels. Not that much story is needed for this kind of game, but the cutscenes are pretty cute and it’s nice that effort was put into making them. To get your carrots back, you’ll be running through five stages, slaying enemies with your sword and your shuriken, with each stage culminating in a boss battle. To hear it described, it sounds like a runner, but in function it’s actually more like a belt-scrolling beat-em-up. 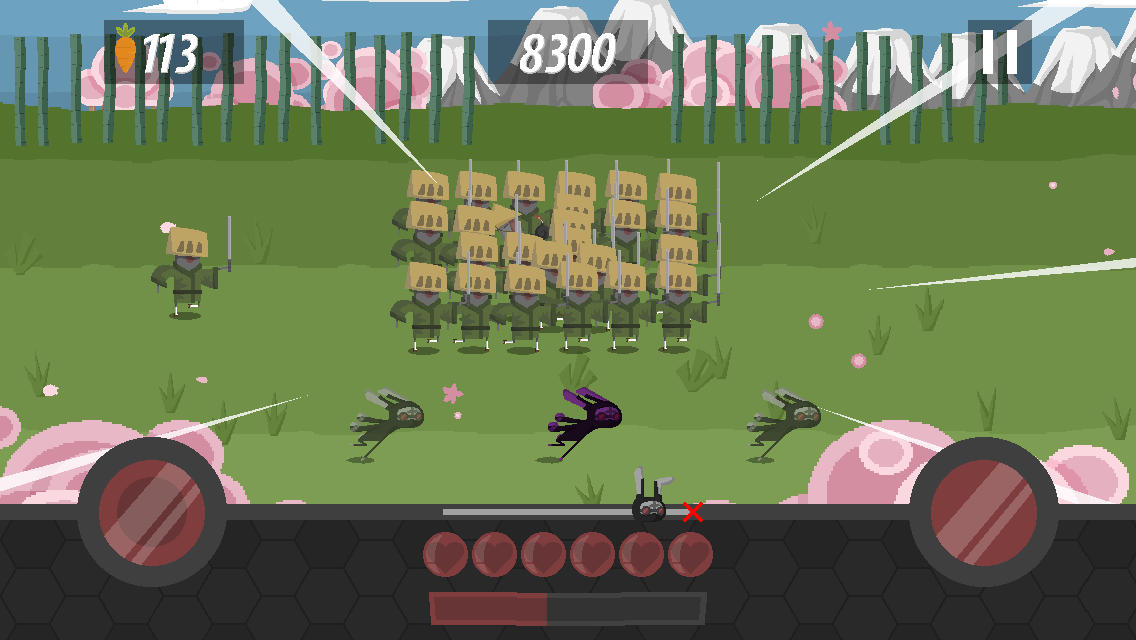 The controls are pretty simple. A virtual stick on the left side of the screen moves your ninja rabbit up, down, left, and right around the screen. A virtual button on the right side of the screen can be tapped for a sword attack, or swiped to throw a shuriken in any direction. Between the two buttons is your life gauge and a meter that fills up as you attack and decreases when you’re not. Top it out and you’ll automatically unleash your super move. By avoiding getting hit and attacking consistently, you can build up chains and combos with your attacks for more points, carrots, and meter energy. The rabbit is nimble but never feels out of control on the default setting, but you have the option to adjust the sensitivity of the control stick in the options if you like.

As I mentioned before, there are five stages, each taking place in a visually distinct environment. The stages are broken up into a series of waves of enemies, each of which must be cleared before moving on to the next. Some of the waves will have a predetermined assortment of enemies, but most of them are randomized to an extent, so each time you play, it’ll be a little bit different. After beating the last wave, you’ll face the boss of the stage. These guys are certainly tougher than the regular enemies, but they follow fairly clear patterns. The boss fights are pretty fun, encouraging you to conserve your life points as you work through the stage and adding a welcome extra bit of challenge. 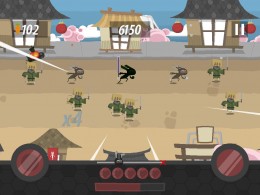 Speaking of challenge, Ninjin doesn’t disappoint in that department. It’s not a merciless game by any means, but until you learn the ropes, clearing even the first stage is going to be rough. Luckily, you can help your odds by purchasing equipment from the shop. Every enemy you kill drops some carrots, and that is the currency of choice in ninja rabbit town. There are massive amounts of swords and shuriken to buy, some clearly better than others, but many just offering a slightly different method of attacking that might suit your play style better.

For example, some swords have an added elemental effect that widens their attack range or causes extra damage, while another has a healing effect at the cost of attack power. The variety of shuriken is particularly impressive, with everything from auto-targeting shuriken to boomerangs to bomb shuriken. In addition to the weapon selection, you can also buy extra life points, new super moves, and some other improvements. The shop’s selection seems to depend on your level and what you’ve done in the game, but exactly how it works is still a bit mysterious to me. Since the game doesn’t sell carrots via IAP, the price of everything is actually nicely balanced, and chances are good you’ll be able to pick up something new every game or two.

This large selection of equipment is one of the cool things about Ninjin. The weapons you bring into battle with you will determine how you play to a very big extent. With the boomerang and standard sword equipped, I focused on throwing the rang into a crowd and then jumping in with my sword for a combo. With the lightning sword equipped, I became a melee beast thanks to its wide attack area, though certain enemies made this a dangerous way to play. With the healing shuriken, I found I was staying away from enemies more and trying to pick them off with the shuriken to earn more hearts. It’s up to you how you want to come at the game, with Ninjin offering equipment to support you however you like to play. 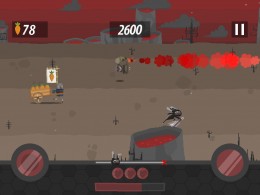 One of the things that can make or break a belt-scrolling beat-em-up is the enemy variety. I’ve played some games where there just weren’t enough enemy types to keep things fresh, and others that tip their full hand a bit too early on. Ninjin does not suffer from this problem. There are a lot of enemy types, all with very different behavior. Some of them can be extremely troublesome even on their own, like the explosive-tossing Dangans, but when they start coming out in combinations with other enemies, things really get wild. Each stage introduces two or three new types while retaining all of the previous ones, so things escalate nicely as you go along. The great thing about this is that it constantly forces you to reassess your strategy, adding value to the different play styles enabled by the equipment.

Further adding to the variety is the presence of a runner-style mission system, offering up three goals at a time to achieve. Completing these missions rewards you with carrots and experience points. As the shop’s selection seems to depend on your level, you’ll be wanting to clear these as often as you can. Goals run the gamut from simply completing a certain number of runs to killing a certain amount of enemies with a particular type of weapon. There are a ton of missions, and when you clear them, it just opens up another set of even harder missions to clear. It’s yet another way the game challenges you to change up your style of play and try out some of the different weapons.

Wait, though, there’s more. As you play, you’ll also unlock two extra modes: Endless and Boss Endurance. Both are exactly what they sound like, with Endless throwing never ending waves of enemies at you and the Boss Endurance forcing you to face the bosses one after another to see how quickly you can put them out of commission. Ninjin supports Game Center wholeheartedly, with score and time based leaderboards for every stage, and a list of achievements to earn. There’s also a gallery that lets you check out the music, cut-scenes, and a bestiary any time you want.

This review is already quite long, so I’m going to only briefly touch on the graphics and sound. The game has a nice, clean visual style. Stage backdrops look great without being distracting, and the characters and enemies are nicely animated and have their own unique look, which is useful for distinguishing between them quickly. The sound effects are a mixed bag, with some of them having a nice oomph to them while other kind of feel cheap and limp. The music fits the theme of the game well, and changes up a little bit with each stage, which helps it from getting old.

I like Ninjin a lot. It’s got a great old-school sensibility to it, a ton of content, and allows for a great variety of approaches to its challenges. There’s a cheeky sense of humor running through the whole thing that adds to the fun. If I had to pick on it, the only thing I could really say against it is that some might feel it’s a bit too narrow in its gameplay scope, and if you aren’t into challenging for scores or clear times, the game is a little on the short side. If you were really good and nailed every stage on the first try, you could finish the story mode in about a half hour. You’d have to simultaneously be some kind of savant at this genre and somehow not want to replay stages to do that, though.

It took me a few hours to get through the main stages, and I still have things to collect and missions to complete, to say nothing of the Endless and Boss Endurance modes. At any rate, it’s free to at least give it a shot, and if you like what you play and you’re still hesitant about handing over that buck for the full game unlock, let me assure you: Ninjin delivers, and then some.