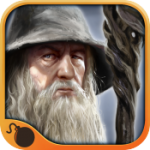 Ah, the Hobbit. A fantastic book about an unlikely hero going on a great journey filled with danger, adventure, and treasure. Also, a somewhat dull movie about the first third of that book, give or take. Naturally, when the time came to craft a game based on this, one of the best fantasy road trips, there was just one genre to go with: city building. Okay, so it’s kind of a poor fit for the spirit of the story, but you have to admit, Middle Earth is a pretty interesting setting for this kind of game. When it comes to fictional settings, few are as fleshed out as Tolkien’s made-up language sandbox.

The Hobbit: Kingdoms of Middle Earth (Free) doesn’t really take full advantage of that setting, but if you’re into social city builders, and you want something a bit more serious than the Simpsons: Tapped Out (Free), this might be a game for you. There’s a pretty robust tutorial included in the game, but for however much it teaches you, it leaves out a lot of useful things. I’ve come up with ten tips to help you fill in the gaps. Oh, and here’s a freebie: the difference between elves and dwarves is only cosmetic. Choose the one you like best. Dwarves, I hope, because seriously, John Rhys-Davies or Orlando Bloom? Make sure you’re on the right side of history.

Here are ten tips on how to get the most out of the game while spending zero dollars: 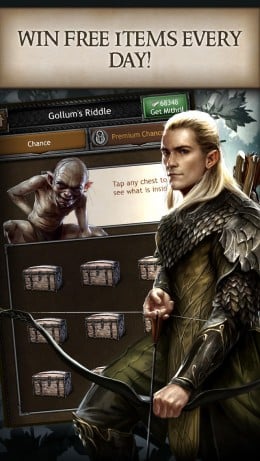 Might makes right. Your primary goal in this game is to build Might. What is Might? It’s a number representing how awesome you are, of course. More accurately, it represents the size and power of your army. Might determines who wins when two forces come head to head. Everything else you do in the game is in service to increasing this number.

Of all the resources, food will be the most important. All resources are important, of course, but the bigger your army gets, the more food they will consume. As your goal is to raise your Might, and growing your military is how you achieve that aim, you can see why it’s important to keep a lot of food on hand. With this in mind, you should make sure you build plenty of farms, level them up, and invest in research to increase your food production. Food should be a priority over all other resources.

Play each day to get your Gollum tokens. This one’s easy. Just start the app once a day and you’ll be rewarded with a free token from Gollum, which you can use to play his game of chance. The smartest thing to do is to save up six tokens so you can play the better game of chance. It’s worth the wait, because the prizes are awesome. You can even bag a deed to another city if you’re lucky enough.

Tap on the box showing today’s date to log in each day. The game never really tells you about this, or if it did, I missed it. On the right hand side of your screen, you’ll see today’s date in a little box. Make sure you tap that each day to log in. After enough consecutive days, you’ll be rewarded with some good loot for your trouble.

At any given time, you can be building something, training offensive troops, training defenses, and researching simultaneously. Like many games of this type, things are geared to make you wait a lot unless you pay up. You can mitigate this by making sure you’re making optimal use of your time. If you’re building something, research something, too. Once you’re ready to grow your army, make sure you’re doing all three things at once, as your resources allow. It can save you a lot of time.

Don’t upgrade to level five on your keep until your seven day protection is just about to expire. So, when you start the game, you’ll be given seven days of protection from being attacked. This is a good thing. It gives you time to get yourself set up. However, if you follow the tutorial and quests strictly, you’re going to end up making a terrible mistake. You’re going to end up building up to level five well before your seven days’ protection is up. Do not do this. Leave your keep at level four until pretty much the last minute. You can do a lot of building in that extra time, and you’re going to need it, because once protection is off, you are a delicious roadrunner in a desert full of coyotes. 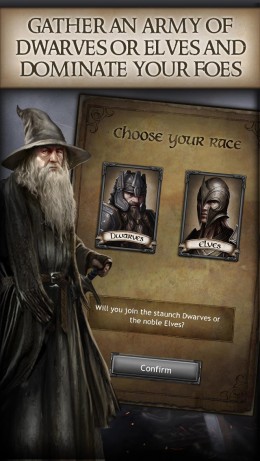 Join a supportive alliance. Make sure you fall in with a decent group before your protection period is up. There are usually several alliances recruiting in the general chat room, some with Might requirements, some without. Which type you fall in with is up to you, but make sure whoever you’re with, they have your back. Ideally, you want the kind of alliance that can spot you some resources when you need them and protect you/avenge you when you’ve been attacked. If you’re finding the members of your alliance aren’t helping you out, within reason of course, then you might want to find a new one. Try not to burn your bridges, though. You don’t want to make any unnecessary grudges.

Wait until your protection is almost over to train troops. Yes, I know I’ve told you that you should be building Might, and to join some alliances, you will need a certain amount of Might, but resources are scarce early in the game. When you’re under protection, there’s no real need for you to have a huge army built up. They’ll just sit there eating all of your food, the big lugs. So, build up your city and put together your resources for the first few days. Leave building your army for the last half of your protection period. That should give you more than enough time to build a reasonable army and find a good alliance before you’re tossed into the fray.

Generally speaking, defenses aren’t worth much. Pits filled with stakes, caltrops, crossbows… this stuff all sounds really cool. Practically speaking, unfortunately, defenses aren’t very useful in this game. If the opposing army’s hero is powerful enough, they’ll cut through your prepared defenses like a hot broadsword through butter no matter how much you’ve built. Having a lot of defenses also bloats your Might score, making you a juicier target for bigger, scarier people than you. It’s good to have a small amount, a few hundred or so, just to prevent a weak army from rolling over you, but other than that, you’re far better off investing in your offensive units.

Get an extra Gollum token each day. This is a pretty well-known trick, but in case you don’t know, you can earn an extra Gollum token each day by sharing the game with ten other people. If you actually do this, all your friends will hate you, and all the family members you like will dislike you. There’s a possibility some of the family members you dislike might move into your spare room. Yikes! But we wants the precious Gollum token, doesn’t we? Well, you can get it without bothering anyone just by going to “Share", then hitting the “Email" button. This will bring you to your mail screen. Now just cancel the email, and make sure you save the draft. Do this ten times, and hey, free Gollum token! Nice! Now delete all those drafts, we both know our OCD won’t allow them to remain.

So, there you go. With these tips in hand, you’ll be king of the realms in no time flat. Viggo Mortensen will be begging to sleep in your garage. The Aerosmith singer’s daughter will be all over you. Hugo Weaving still won’t return your calls. Get out there, get building, and make sure to have some fun. There are a lot of interesting characters in Middle Earth, and I’m not talking about the ones created by Tolkien.