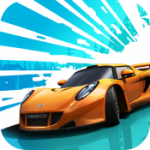 As a complete role reversal from the virtuous Smash Cops, Smash Bandits (Free) puts you in the seat of a maniacal criminal ready to wreck anything and everything in sight. Sounds like fun, right? That’s because it totally is.

Similar to Smash TV, the setup is that you’re providing some sort of garish entertainment for a home audience by way of television ratings (which functions as your score). It’s absolutely bonkers and in no way cohesive, but sometimes it’s just fun to blow things up and not ask questions. Smash Bandits is no exception.

With a scheme that feels tighter than Smash Cops, the controls work very well, and feel right at home on a touch device. Like most of CAVE‘s shooters, there’s a small portion at the bottom of the screen that’s dedicated to controlling your vehicle — touching anywhere in said space accelerates, and moving your finger from left to right turns. Every other action is context sensitive (like the ability to ram other cars by taking your finger off the gas, touching a cop, then accelerating again), and works like a charm. 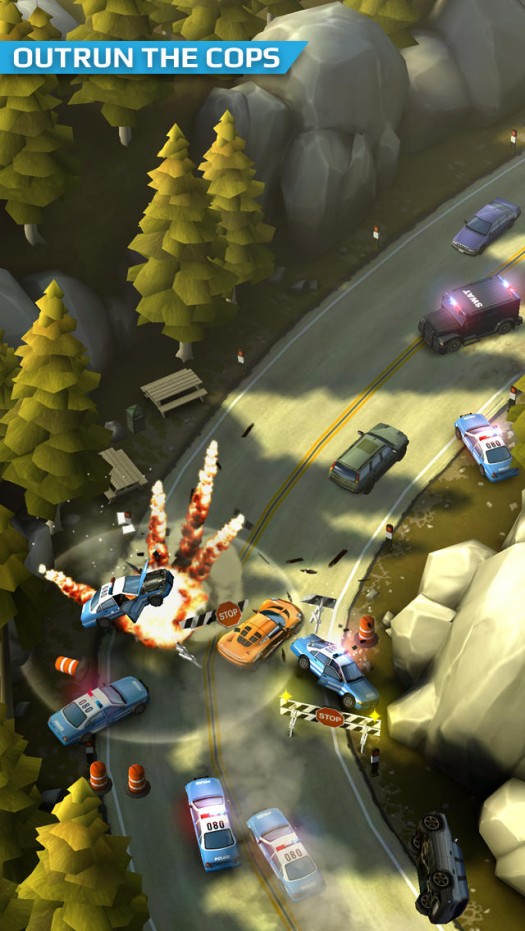 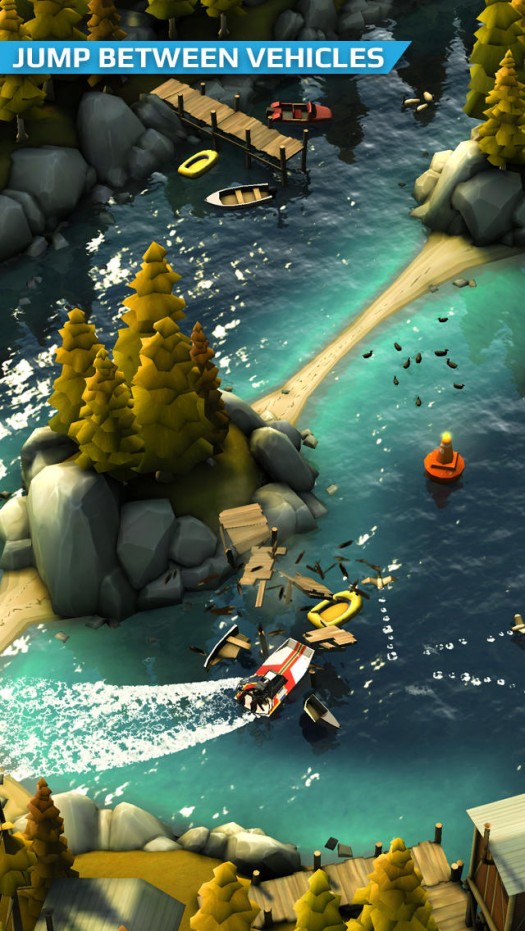 Before long I felt right at home in Smash Bandits, and was powersliding my way around, smashing countless objects for fun and profit. Your goal is to not only obliterate marked objects for points though, as you’ll want to get as far as you can through the city while evading the cops. It’s hectic, but once you get the hang of things balancing your pursuit and smashing objects becomes a fun strategic dichotomy. Of course, this setup would be boring after a while if you were just driving all the time, but thankfully there are boating sequences and tank sequences to help mix things up.

Each “run" will have its own set of challenges to pursue (usually involving destruction or getting as far as you can), with the ability to enact temporary power-ups that are good for one session, and the chance to upgrade your current car, or buy new ones. All of this is accompanied by an excellent visual style that not only looks cutting edge, but it also works. Some licensed rock tracks help get you in the mood to smash things, and the well crafted sound effects keep you in the action with just about every possible hard-hitting, tire screeching cue you can think of.

Smash Bandits also has a decent free-to-play system to back up all of its solid gameplay. The way the developer really succeeds here is the fact that the game is compelling to play even without unlocking anything. Even if you don’t strive to upgrade your current cars, unlock new ones, or enact helpful power-ups, just playing the thing is still fun enough to warrant numerous playthroughs.

The only major problem with Smash Bandits‘ approach is the energy mechanic, which limits you to five plays in a short amount of time, forcing you to either wait or spend in-game chips to keep playing. Thankfully, chips are given out a decent amount, and playing it in short spurts is an excellent way to go about runs.

Barring the fact that I wish you could just purchase the game outright, Smash Bandits is a wonderful new addition to the free-to-play runner iOS family. Over the course of a few days I just couldn’t put it down, and I sincerely hope a fully paid version with all the bells and whistles included is a possibility somewhere down the line.