Smash Cops [$2.99] from Hutch reminds me of Need For Speed: Hot Pursuit, as the main objective is to take bad guys off the road by catching up with them and then ramming their vehicles until they catch fire and roll in slow-motion. Sounds good, right? In Smash Cops the police pursuit is set in an urban neighborhood more like Grand Theft Auto, so there’s heaps of intersections and front lawns to skid around.

The most distinctive feature of Smash Cops are the controls, which have become a talking point in our discussion thread. The default touch controls involve placing one finger behind your police car and using it to “push" your vehicle along, like a toy car, with acceleration being automatic. This “push" mechanism has received mixed feedback, with some absolutely loving it and others loathing it and preferring the alternate virtual joystick option. Personally, I enjoyed the new push controls, but found the virtual joystick jerky and awkward for steering.

While driving, tapping the screen anywhere causes your police vehicle to lunge forward in a ramming maneuver. Smacking into the side or front of a fleeing vehicle is the most effective and can lead to the criminal’s car smashing, rolling and possibly catching fire. There’s no warnings, issuing tickets or police diplomacy, you just smash into the criminals as hard as possible each time your RAM meter has fully recharged. 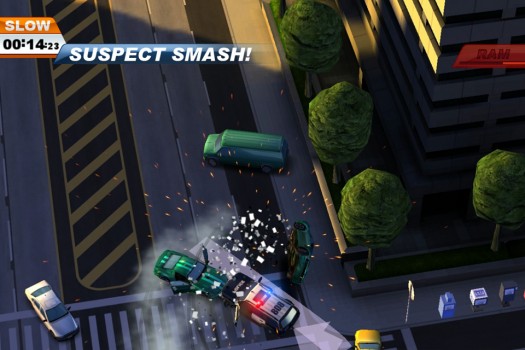 Smash Cops has 22 missions to unlock, with each mission worth six stars. The missions include pursuits, emergency response calls and driving challenges. Pursuits involve racing alone or working with other cops to take down a suspect’s vehicle, like multiple sports cars, stolen security trucks or an ATV, before the criminals escape across the state line. However, the other cops are actually more of a hinderance as they drive badly, swerve around, get in your way and appear to purposely take you out. Basically they’re more frustrating than the bad guys and civilian drivers themselves.

Responding to emergency dispatch calls involves following a series of markers to the crime-scene within a time limit, speeding around the neighborhood while dodging traffic and bad guys. But the driving challenges proved hardest, like staying between the traffic cones – which is when you realize how poor your driving is. If only the goal was to knock down as many cones as possible! Completing a challenge mission earns you a “Super-Cop" vehicle power-up for one mission, to “Drive faster. Hit harder. Last longer". 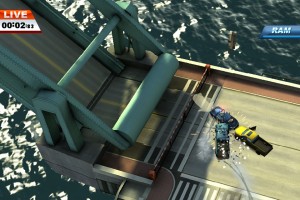 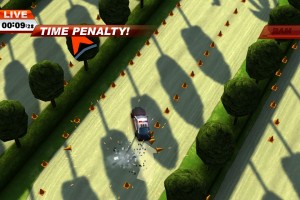 The game tries to sell you “Super Cop" upgrades as an in-app purchase, with IAP messages in the game over screen, upgrade notification screen, in the tips and on the main menu screen. And when you restart the game, a red “buy all" button appears. This felt a little pushy, however the IAP is not necessary as you can unlock everything without too much grinding. And when you do replay missions, it’s often with a new vehicle so it’s still fun.

The graphics are excellent, with the game presented as if being filmed from an overhead police chopper for a live television feed. Check out the trailer below, for a taste of the sweet graphics used for the vehicles and city setting. Smash Cops scores high marks for being visually appealing.

You start out as a new police cadet, in a regular police car, but by completing levels and earning stars you can unlock four other vehicles like the speedy ‘Interceptor’ or the aggressive ‘Brutus’. Vehicle upgrades make it easier to replay levels for more stars, plus because the mission routes don’t appear to change, you can learn the route and identify short-cuts for better ramming opportunities. This helps you gain promotions up the five ranks to “Captain."

Smash Cops is a great-looking police-pursuit game, with an innovative “push" control system that’s a refreshing variation from regular car racing controls. Opinions on the push controls are polarized, but if they click with you they actually offer a simple and fun way to control the game. It’s nice to see developers using touch controls in new and innovative ways, especially when it involves car chases, 360 degree burn-outs, ramming, and slow motion vehicle smashes.