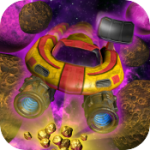 Still holding a large place in my iOS gaming heart is our 2010 Game of the Year, Space Miner (Free) is a fantastic game that has aged incredible well for how old it is. Filled with an amusing plotline, and gameplay that revolves around constant equipment upgrades and exploration, Space Miner is still a game you should play.

After going through the first few missions, we dip into Space Miner Blast (Free), the pseudo-sequel of sorts that takes the core gameplay of Space Miner and tweaks it into a single-session pick up and play sort of game.

I could come up with some kind of witty conclusion for this TA Plays post, but, instead, I’m just going to go play some more Space Miner, and I recommend you do too.