We’re all pretty excited for Simogo’s next upcoming project Device 6, especially after the phenomenal Year Walk ($3.99) tickled our collective fancy earlier this year. Simogo officially lifted the lid of Device 6 in a blog post late last month, revealing very few details about what this new adventure would entail but treating us to a very stylish teaser trailer. In a feature over at Eurogamer, Simon Flesser of Simogo dishes out a few more details about Device 6 and I’m finding my anticipation rocketing even higher than it was before. 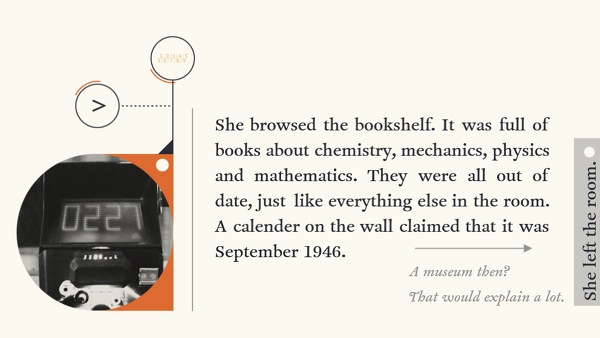 Device 6, by Simon’s own admission, is “one of those games that’s surprisingly hard to talk about," and even with new information coming to light I’m personally still not completely sure what the heck it is you do in the game. And that’s sort of the most exciting part about it.

We know you’ll begin your adventure as a character named Anna who wakes up on a mysterious island with a rough case of amnesia. She awakens in a strange castle, and there seems to be a second, identical castle on the very same island. You’ll explore what’s left of Anna’s memory as brief snippets come back to her and you delve deeper into the world and the reasons that you find yourself in it. Also, there’s something to do with “an unusually unpleasant doll." I’ve got shivers.

A central element in Device 6 will involve geography and maps, and that will be tied directly to the story progression. Like, you’ll literally move back and forth between the actual words of the story, it sounds like. My brain is already twisting, but it sure sounds cool. The other very interesting thing I took away from the interview is that Device 6 actually evolved out of the Companion app ($3.99) that accompanied Year Walk‘s release.

Definitely read the entire feature over at Eurogamer, as it offers a great glimpse into where Simogo is coming from, and where they are going, with Device 6. I’ll leave you with this choice quote from Simon though, which gave me a hearty chuckle: “Mainly we have always wanted to do new things – things that we haven’t made before or even preferably things nobody else has made before. What did we learn from Year Walk? That we should never do an adventure game again. So that’s why the first thing we did afterwards is an adventure game.