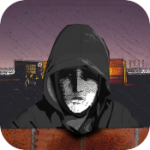 Every now and then, sometimes you just feel like old school gaming. Maybe not as old as Zork or even Adventures of Hugo, but back to the time when the phrase “choose your own adventure” took off. Graphics do not always make a game, yet today, that’s the focus of a lot of developers, and quality, story-driven, narrative games are hard to come by.

Which is why I’m quite liking Paradox Factor ($1.99). The only graphics you’ll see in this game are the app icon and when you first launch the app. From there on out, it’s all text-based, and it pulls you into it’s very detailed and entertaining story.

You embark on your journey as, well, whoever you choose to be named as. Within the first few pages, you’ll choose your name, gender, and whether you are marrying the man or woman of your dreams. 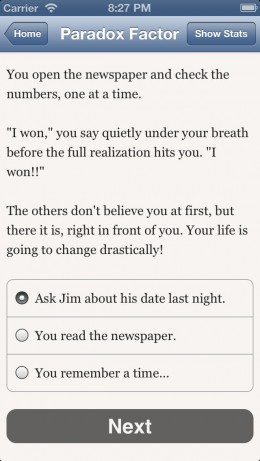 After the basics are set, you begin your adventure as a scientist, who has just gotten the go ahead to perform live trials on a project to control and block neurons and pathways, which will let one time travel and remember the future, by manipulating various neurons in the brain.

This project is dubbed the Paradox Factor, for the one biggest computer routine: should the person decide to do something, such as kill themselves, the Paradox Factor kicks in and ends everything, thereby preventing a paradox (get it?) from occurring. The story can be slightly convoluted at first, but you’ll quickly get what’s going on.

The narrative is very well written, and you’ll definitely feel like you’re a real person, not just somebody reading and determining the story.

As the story progresses, and you choose your actions, certain previous actions will change as a result. Your wedding to one woman might be full of joy, happiness and two wonderful kids, but when progressing further and revisiting the past, you might be married to another person, whom you despise, with no kids and a butler. You quickly figure out why your character goes through this, and it all falls nicely into the story.

During my time with the game, I hadn’t come across any scene that resulted in my character failing by any means, just different actions that required me to revisit a previous exchange and continue from there. You may occasionally be lost as to where to go, as the game doesn’t give you any direction, but that’s also the point of it. Perhaps you’ll have to read through a few scenes again, because maybe one word has changed, which results in different actions being available, which will change your course.

While Paradox Factor has a thrilling story that mixes science and science fiction nicely, there are a few flaws. Perhaps I’m being nitpicky when it comes to these.

An odd decision, and not necessarily a flaw, is that the game has no sound. Yes, you’re reading for the duration of the story, but I would’ve thought choosing an action, or tapping forward, would’ve resulted in some sort of “click” or “beep” to acknowledge your action. 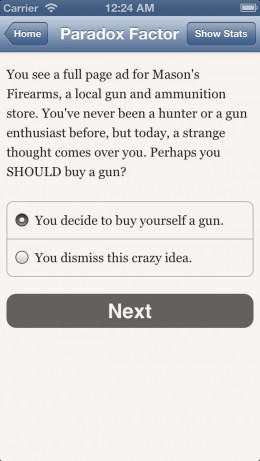 Whenever you choose an action, you first have to tap what you want to do (talk to Jim, read the paper, etc.) and then tap “Next” to proceed. It would be nice to have the game automatically continue once you’ve chosen your action. Far from game breaking, and perhaps it’s there to give you a second thought to think, is that really what you want to do? Maybe a future toggle to decide how you want the game to react. There also seems to be a bit of a delay between when you tap and when the action is registered.

Finally, this flaw is a game breaker (at least to me). I’m one of those people who likes having a clean interface, and therefore close my apps from the app tray when I’m done with my iPad for a while. I did this for Paradox Factor, as I would any other game, and when I relaunched it a couple of hours later, I was back at the screen prompting me to enter my name. I did so, thinking maybe this is how the game saves your progress, but it then proceeded to ask me about my sex and who I want to marry.

It wiped all progress.

To me, this is a game breaking issue, as there is no way to manually save your game. Exiting the app by hitting the home button is fine, and will retain your progress, just don’t remove it from the tray. I’ve sent an e-mail to the developer, and hopefully there’ll be a solution to it. Is this happening to you as well?

If you’re a fan of narrative fiction, and feel a bit nostalgic, you cannot go wrong with Paradox Factor. The story will pull you in and keep a fierce grip until you come to the final conclusion, at which point you’ll sigh and say… more. MORE. Just be wary of what is currently a progress wiping issue.