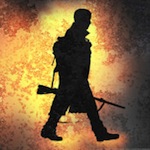 Perma-death is a mechanic that you usually only see in rogue-likes, which is a big part of the reason why dual-stick shooter Trial By Survival is kinda blowing our collective hair back. It’s uses perma-death, too, except it wraps that mechanic into a high-octane fire, bomb, and bullet-fest across a wasteland. The levels are procedurally generated, and the loot? It’s from real players that have died.

Survival, which his tonight at around 11PM, also boasts two modes: the aforementioned Survival mode as well as an Arena ($1.99). The game also has a pretty extensive list of IAP designed to give players a leg up, if they feel like they need one. For example, you can buy a kit that gives every new survivor your spawn a revolver and gun.

You can get a sense of the game by checking out this demo:

On our forums, there’s a lively discussion going on and some pretty positive opinions on the game. Members are also talking about the IAP and how it informs the overall design. This is, after all, a free-to-play game.

We’ll be putting this through its paces for review, so stay tuned for a bit more info as the game sees its release around the world tonight.