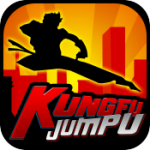 One of the games that hit earlier than usual this week but is making lots of waves in our community is Kung Fu Jumpu ($0.99) from Magic Cube. Part of the reason it’s gotten so much traction is because it’s unlike any game I’ve seen before. It’s a fighting game, but it’s turn-based.

How does that work? Well, you have a selection of ten different fighters to choose from, each with a unique style and set of moves. You don’t control them freely with a joystick and buttons like in most fighting games, rather you’ll decide upon which move you want to do and then you’ll pull back on your fighter and launch them across the screen, hopefully making contact with and damaging your opponent. It feels a lot like Worms crossed with Street Fighter.

While that might not sound like much, Kung Fu Jumpu actually has a ton of depth due to its pretty big collection of fighters and how unique they are from one another. You really have to think about the kind of move you want to do before you do it, and then aim it accordingly based on what move you think your opponent will do. It’s surprisingly fun.

The couple of problems I’ve noticed so far are when your fighter gets to the edge of the screen things can get kind of weird as sometimes you don’t have enough room to pull back and slingshot their move. Also the AI seems to “cheat" in that at it almost always seems to know what move you’re about to do and will perform the perfect counter for it. A remedy for this is that, once you’ve played through the first few fights in the Campaign, you’ll unlock a multiplayer mode and play against a random person online. The online feels like it could be fleshed out some more, and it’s begging for an asynchronous mode, but it’s a barrel of fun nonetheless.

There’s a slick launch trailer for Kung Fu Jumpu that showcases all the different characters, but I think you’ll get a better idea of how it plays from the following developer hands-on demonstration video.

Kung Fu Jumpu is also pretty rough around the edges in parts. There’s not really any explanation of the different modes, but after you first fire it up you’ll need to play through some one-off Arcade matches before earning enough coins to unlock the Campaign mode. In Campaign you can actually upgrade your various fighters using coins, also available as IAP, but one catch is that each fighter has a cooldown period once you’ve used them. Similar to Magic Cube’s other title Call of Snakes ($0.99). It’s not such a huge deal as you can play with another fighter while one is cooling down, but it’s still something to keep in mind. Also, as mentioned you’ll need to play the first few Campaing matches before even unlocking the option for Multiplayer.

Quirks aside, Kung Fu Jumpu is an incredibly interesting game. It feels like a fighting game broken down and put back together with touchscreen and mobile in mind. It’s surprisingly strategic too. If you’re in the market for something new and fresh, definitely give it a look, and see what others are saying about it in our forums.